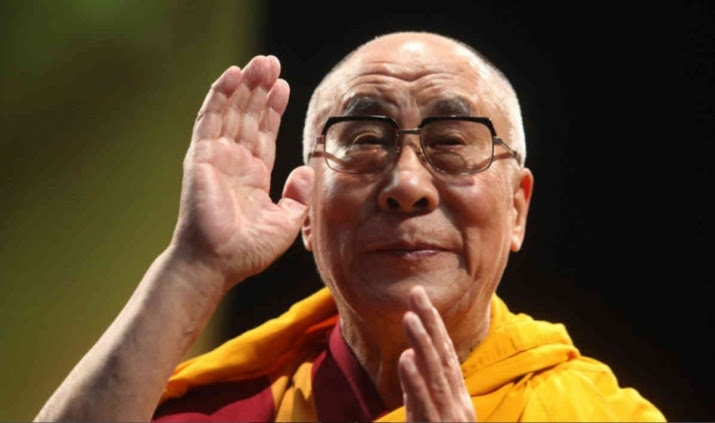 His Holiness the Dalai Lama. From youtube.com“Human beings by nature want happiness and do not want suffering.  With that
feeling everyone tries to achieve happiness and tries to get rid of suffering, and everyone has the basic right to do this.  In this way, all here are the same, whether rich or poor, educated or uneducated, Easterner or Westerner, believer or non-believer, and within believers whether Buddhist, Christian, Jewish, Muslim, and so on.  Basically, from the viewpoint of real human value we are all the same.”

Better known for his wisdom and message of peace and compassion, His Holiness the Dalai Lama showed a more playful side during a television appearance on Thursday, when asked for his thoughts on US presidential candidate Donald Trump.

Speaking during a prerecorded interview for the British breakfast time TV show Good Morning Britain, the Dalai Lama refrained from voicing an opinion, instead holding his hand above his head in a humorous attempt to depict Trump’s trademark combover. “I don’t know. Sometimes the way his hair is something like that,” His Holiness said, hanging his fingers over his forehead. “And his mouth, small,” he chuckled, mimicking a tiny chattering mouth with his hand. “That’s my impression.” (YouTube)

The Dalai Lama’s good-natured impression of the Republican presidential nominee provided a moment of gently levity in an otherwise vapid interview conducted by British talk show host Piers Morgan. The former tabloid journalist and CNN anchor also used his time with the Nobel Prize laureate to seek His Holiness’ views on such weighty topics as the recently announced divorce of Hollywood stars Angelina Jolie and Brad Pitt, and the number of Twitter followers of reality TV star Kim Kardashian. Morgan even asked the Dalai Lama whether he could treat his cold with “his great spiritual healing powers.” (YouTube)

“You should ask a doctor. I have no healing power,” His Holiness responded indulgently, noting that he was very skeptical of those that claimed they did. (YouTube)

Morgan, who has had checkered and, at times, controversial career in and out of the public eye, drew widespread criticism on social media for “wasting time” and choosing to focus on trivial matters in his conversation with the 81-year-old spiritual leader. Others criticized the interview as disrespectful, with one disappointed viewer tweeting: “So many important issues could have been discussed yet most of the interview seemed to be silly jokes.” (Express)

His Holiness the Dalai Lama is currently traveling in Europe to give a series a series of talks, teachings, and public appearances in September and October. In addition to the UK, his itinerary includes stops in Belgium, France, Italy, Latvia, Poland, and Switzerland.