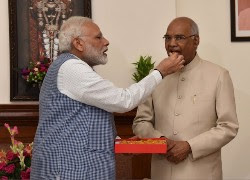 His Holiness the Dalai Lama has congratulated Sri Ram Nath Kovind on becoming the 14th President of India.

“I understand that in your public career thus far, you have done much to champion the cause of the poor and the downtrodden,” the Tibetan spiritual leader said in his letter to Ram Nath Kovind, who belongs to Dalit caste and who has fought for Dalit rights and issues.

He further added, “Although India has achieved tremendous development, challenges remain in the fields of nutrition, education and protection of children, reducing the widening gap between rich and poor, and curbing corruption. I have raised these concerns with leaders before, because I feel they are serious issues that need to be tackled openly and boldly. It is vital that India succeed.”

The 82-year-old exiled Tibetan leader said that he is sure the new President would do all he could to consolidate India’s strengths so that the nation provides the leadership in the world that its stature entails.

“This is the 58th year of our life in exile. Thanks to the kindness and generosity of the Government and the People of India, more than 130,000 Tibetans continue to make their homes in this country. We will always be grateful,” said the Dalai Lama, who is currently in Ladakh.

The spiritual leader often described himself as a ‘son of India’ because saying his entire thinking has been shaped by the Buddhist teachings, from the great masters of Nalanda University. “Therefore, I feel a real bond with this great country and a constant concern for its welfare,” the Dalai Lama said, “As India develops and grows there is much to be proud of. It pleases me to see that the international community is becoming ever more aware of India’s importance, not only because it is the world’s largest democratic nation, but also because of its exemplary traditions of religious harmony, karuna and ahimsa.”

Defeating former Lok Sabha Speaker Meira Kumar with 65.6% of the vote in his favor, 71-year-old Kovind, who was serving as the Governor of Bihar, will become the second Dalit President after KR Narayanan. Kovind is scheduled to take his oath on July 25.The preparation for oath ceremony is going on with full swing at Rashtrapati Bhawan .