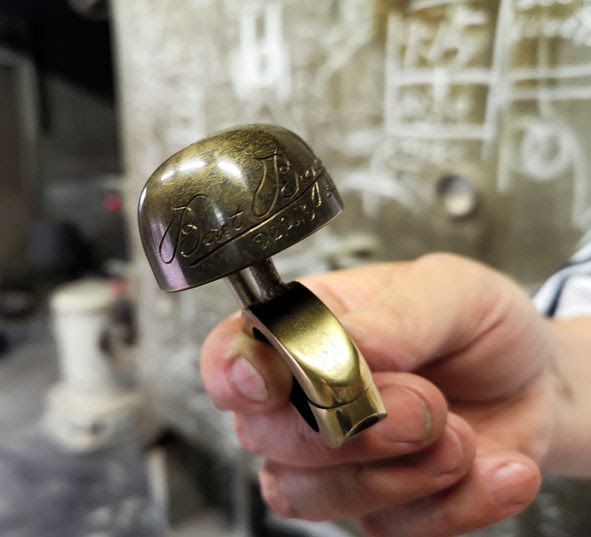 A bicycle bell made with techniques used for Buddhist orin bells. From asahi.com

when we are not at sangha, meditating by ourselves at home, or while we are traveling? Some of us use incense as the timer – when the incense stick burns out, the meditation period is over. Others set an online bell to sound at the end of a specified meditation period.

Cyclists in Japan and beyond now have the option of adding the soothing sound of a Buddhist altar to their handlebars. Engineer Junichiro Kadono, 59, and bellmaker Katsuaki Shirai, 61, have combined efforts to create custom-made orin bells for cyclists. The bell can be attached like any normal bicycle bell, but will offer a unique tone to passersby and fellow cyclists, and enhance the visual beauty of any set of handlebars.

An orin is a traditional Buddhist bell that is used when reading sutras. The gentle sound is believed to help remove evil spirits and to purify the minds of practitioners. “[The bell] lets people know a bike is coming, since it makes a clear, resonating sound,” said Shirai said. “I wanted to make one that when you ring it, wouldn’t make people feel unpleasant.” (The Asahi Shimbun)

The bellmaker’s website adds: “For Japanese people, the sound of orin is strongly associated with paying a tribute to family members who passed away, and, at the same time, easing the pain of loss. It is commonly believed in Japan that [the] gentle sound of [an] orin relieves the pain and brings peace to mind body and soul.” (Shirai Bell)

The collaboration between Kadono and Shirai began in 2011, when Shirai was visiting the Kyoto Municipal Institute of Industrial Technology and Culture to analyze the metallic composition of an aging gong.  He had been tasked with making a new gong for Kyoto’s famous Gion Festival, a month-long festival taking place in July each year. An early prototype of the bell used a cushion to connect it to the bicycle. From asahi.com

While there, Kadono, a cycling enthusiast, asked Shirai if he could make an orin bicycle bell. Shirai pressed Kadono to first create a prototype, which he did, and Shirai agreed to work on the project.

Speaking about one prototype, which featured an orin bell attached to a box, Shirai said, “Experience has shown me they resonate better when you hit them from a slight angle, rather than at a full 90-degree angle from the side,” (The Asahi Shimbun) A later prototype secured the bell to the bicycle while resting it on a cushion, but this idea was also turned down. In the end, Shirai turned the bowl upside down in the fashion of most other bicycle bells, and he created a striker made out of ebony, a dark hardwood that would enhance the resonant tone of the bell.

The striker is attached to a spring next to the bell, allowing the bicyclist to alert pedestrians and others using just one hand.

The handcrafted bell is available on a made-to-order basis and costs US$283–463, with an additional fee for any personalized metalworking or painting. According to Shirai’s website, “Every part of the bell is carefully handmade to produce a pleasant sound never heard before. Every bell is unique in its own way and produces an original sound. . . . The bell is a product of both [the] Buddhist culture of Japan and [the] tremendous efforts of generations of craftsmen who developed the traditional techniques of metal works.” (Shirai Bell)

Buddhist om bell sings when struck with a wooden beater stick & rubbed around the edge on the outside. By rubbing the stick around the rim of the bell, you produce a spiral of energy with many harmonics. This improves the vibrations in the house, cleansing the energies. Excellent tool for space clearing.

These Buddhist om bell, native to the Himalayas and also know as Tibetan om bell, with their fascinating & ethereal sounds have an undeniable influence on the mind, body & soul. They are also used as an aid in meditation. Because of their spiritual quality, these sounds can touch you at the deepest level of your soul, passing their transforming power to you.