Climate change knows no borders. It will not stop before the Pacific islands and the whole of the international community here has to shoulder a responsibility to bring about a sustainable development. By – Angela Merkel

Buddhists from New York City, led by members of the Buddhist Action Coalition, are organizing a Buddhist-led event ahead of the 20 September worldwide Youth Climate Strike. The gathering will start at 10:30am at the Jacob Wrey Mould Fountain in City Hall Park, New York City, with a planned schedule that includes chanting, singing, and sitting meditation, as well as the reading of a climate statement. Members will then engage in walking meditation to join the Youth Climate Strike, which will begin two blocks northeast in Foley Square.

The Buddhists participating aim to spend the afternoon supporting the striking youth. Participants are encouraged to bring a small bell if possible and to wear a robe, rakusu, or other visual sign of Buddhist affiliation or practice during the event.

The Youth Climate Strike will take place three days before a United Nations emergency climate summit, also in New York City. Other major climate change organizations, including 350.org and Earth Strike, as well as groups nationwide in New Zealand, plan to hold separate events a week later on 27 September, which marks the anniversary of the publication of Rachel Carson’s book Silent Spring (Houghton Mifflin 1962). During the UN summit, 16-year-old Swedish climate activist Greta Thunberg will speak at a parallel youth summit alongside other young activists to present their “demands for a just world and a livable future.” (Vice)

The Buddhist Action Coalition is an organization of engaged Buddhists comprised of New York City area practitioners, with the goal of bringing Buddhist values and ideas into alignment with notions of justice. Their mission is “to organize and inspire compassionate Buddhist initiatives in advancing social, economic, and environmental justice for the benefit of all beings, undertaken through advocacy and nonviolent direct action.” (Buddhist Action Coalition)

The Buddhist Action Coalition has previously taken part in the Lights for Liberty campaign to end concentration camps in the United States, organized a panel discussion on the Rohingya genocide, and joined the March for our Lives protest against gun violence. They have partnered with the Poor People’s Campaign and sponsored a Truthful Tuesday event The organization formed in February 2018 to “find a skillful way that Buddhists can bring our practice off the cushion with a mind to confront the great challenges of our time. The challenges are many, and include economic and social injustice, racial and gender discrimination, disintegrating immigrant rights, and the devastating results of climate change.” (Compassion NYC) 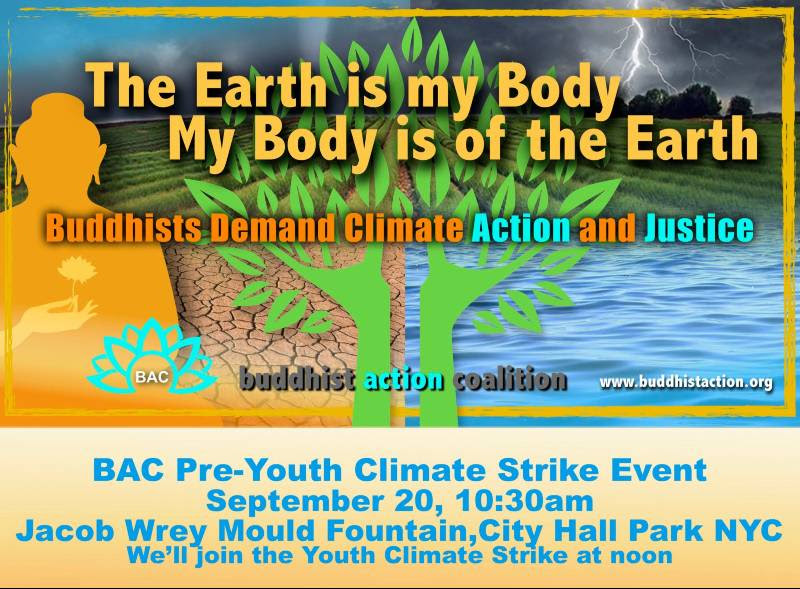 Originally spearheaded by Ven. Bhikkhu Bodhi, Rev. Greg Snyder, Sebene Selassi, and Bob Kolodny, the Buddhist Action Coalition has attempted to avoid hierarchy, instead encouraging broad participation and a sense of ownership by its members. “We don’t want to have a lot of talking heads in front of the room lecturing people on ‘how it’s going to be.’ This is not about egos, but about forming a group that will have lasting impact,” said Snyder after the organizing meeting. (Compassion NYC)

Climate change is destroying our path to sustainability. Ours is a world of looming challenges and increasingly limited resources. Sustainable development offers the best chance to adjust our course.By – Ban Ki-moon