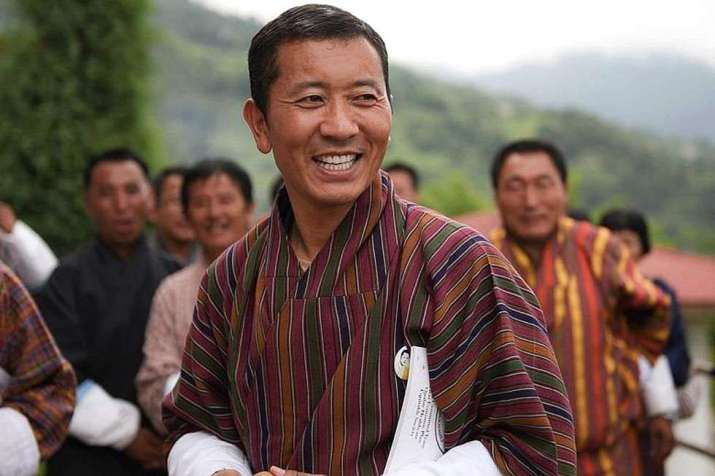 Bhutanese Prime Minister Lotay Tshering. From vajiramias.com
Bhutan is geopolitically in South Asia and is the region’s second-least-populous nation after the Maldives. Thimphu is its capital and largest city, while Phuntsholing is its financial center.
Bhutan’s independence has endured for centuries. It has never been colonized in its history. Situated on the ancient Silk Road between Tibet, the Indian subcontinent and Southeast Asia, the Bhutanese state developed a distinct national identity based on Buddhism.

Bhutan has reported four new confirmed cases of COVID-19 so far this week, all of them among overseas returnees to the remote Himalayan nation, which, despite its small size and limited resources, has mounted a comprehensive and systematic nationwide response to limit the spread of the pandemic within its borders.

“We have two more positive cases in a 27-year-old female and 25-year-old male who returned from the Middle East, the office of Prime Minister Lotay Tshering announced in a statement on Tuesday. “Both were detected while in quarantine and have been moved to isolation for treatment. This takes the total to 11.” (Instagram)

Soon after the novel coronavirus started spreading around the world, Bhutan was quick to adopt a comprehensive, evidence-based tracing and testing regime, and put in place strict quarantine procedures and border controls to avoid overloading its healthcare system. The coordinated response has been bolstered by the nation’s traditional communal values—in which all levels of society, including the royal family, have acted in unison to observe social-distancing and support other response measures—and the country’s free universal healthcare system, a key aspect of the kingdom’s Gross National Happiness (GNH) philosophy since the 1970s.

The philosophy of GNH was introduced in the late 1970s by Bhutan’s fourth king, Jigme Singye Wangchuk. An alternative to traditional metrics for measuring national development, such as gross national product (GNP) or gross domestic product (GDP), GNH is founded on four underlying principles or “pillars:” good governance, sustainable socio-economic development, the preservation and promotion of culture, and environmental conservation.

The government’s National Preparedness and Response Plan has included a national COVID-19 response fund, which has enabled a range of preventative measures to be implemented. The fund quickly attracted public donations, including from members of Bhutan’s Parliament, who donated one month’s salary to support the country’s response to the pandemic. Hundreds of Bhutanese nationals have since been repatriated from the Middle East and elsewhere by the government of Bhutan in two phases of dedicated flights, the second of which began on 18 April.

Also on Tuesday, Prime Minister Lotay Tshering shared a public statement via social media on the occasion of International Nurses Day. Expressing gratitude for the contributions of the country’s nurses, Tshering stated: “Dear nursing friends. We know you are very passionate about what you are doing, working tirelessly round the clock. Some of you see it as spiritual fulfillment. We know you have dealt with [a] hundred other patients but every patient expects to be treated as if he or she is the first. Despite [these] challenges, please look at it as an opportunity to contribute to our country. Your care and compassion will ripple into a healthier future. May these selfless acts result in fulfillment, [in] this life and [the] next.”

Bhutan reported its first confirmed COVID-19 infection—a 76-year-old American tourist—on 5 March. On 14 March, the American was evacuated to the United States by air ambulance, in coordination with the US embassy in New Delhi and at the request of his family members. Although the repatriation of the patient at the time meant that Bhutan had no confirmed coronavirus infections, the prime minister of Bhutan announced on 20 March—the same day that the king and queen of Bhutan announced the birth of their second child—that the American tourist’s 57-year-old partner had also tested positive for COVID-19, becoming the kingdom’s second confirmed case.

At the time of writing on 13 May, global confirmed SARS-CoV-2 coronavirus infections were reported to have reached 4.26 million, with 291,981 deaths so far recorded and 1.5 million recovered.* The World Health Organization in March estimated the mortality rate from the virus at 3–4 per cent, based on incomplete and preliminary data, with the elderly and people with underlying health conditions considered most at risk. Bhutan shares borders with two political and economic heavy-hitters, China and India. The Chinese government has so far reported 84,018 confirmed cases of COVID-19 and 4,637 deaths, with 79,224 reported to have recovered, while India has reported 74,480 confirmed infections and 2,415 deaths, with 24,453 recovered.

Bhutan is also notable for pioneering the concept of gross national happiness.