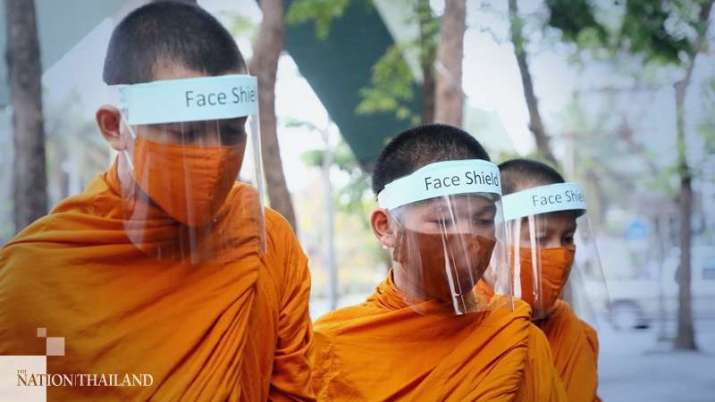 Monks from Wat Matchan Tikaram in Bangkok wear face masks while on their daily alms round. From nationthailand.com
About 95 per cent of Cambodians are Buddhists. Theravada Buddhism is the religion of virtually all of the ethnic Khmers, who constitute about 90 percent or more of the Cambodian population. It has been the official state religion since about the 15th century. During the Khmer Rouge era all religions were banned and monks were killed. After the Khmer Rouge was ousted monks returned and temples were rebuilt. Buddhism was made the official religion again in 1989. As of 2008 there were 4,000 gilded Buddhist temples filled with saffron-robed monks in Cambodia.

With strict stay-at-home orders and social-distancing measures limiting normal social interactions, Buddhist monks in Cambodia and Thailand have adjusted their daily habits and religious activities to help prevent the spread of COVID-19. While many monks are using live-streaming to reach their followers and offer prayers virtually during celebrations such as Vesak, which commemorate the birth, enlightenment, and passing from this world of the historical Buddha, many other religious rites, such as those held for the traditional Lunar New Year, have been scaled back or canceled altogether.

According to Thai monk Ven. Phra Surasak Suthanto, although many monastics still perform their daily alms rounds outside the temple, other ceremonies, rites, rituals, and celebrations are being adjusted, restricted, or canceled. “We still receive alms in the morning, but we wear face masks,” said Ven. Suthanto. “When we give blessings, we have to keep a distance of around a meter or two.” (The Star)

Since the emergence of COVID-19 in both Buddhist-majority countries, monks have altered their daily routines and religious practices. Ven. Surasak noted that his temple had canceled nearly all outdoor services, including blessing ceremonies for new homes, businesses, and marriages, as well as rites to rid places of evil spirits. Ordination ceremonies have also been canceled or postponed.

“The only thing we still do is funerals. We tell people who attend funerals to wear face masks, and monks also wear them when we have to pray,” said Ven. Surasak, adding that the duration of funeral ceremonies had been shortened to protect all involved. (The Star) Monks observe social distancing while chanting in a pagoda in Phnom Penh. From thestar.com

In Cambodia, monks maintain social distancing by remaining inside monasteries, also known as pagodas. Laypeople wear face masks when they visit. Sand Somney, a spokesman for Cambodia’s Ministry of Cults and Religion, said people were still allowed to visit pagodas without any limit on numbers, but they were required to maintain a distance of two meters from each other, wear masks, and not linger after making their offerings to the monks.

However, Ven. Try Thaney, a monk and university student at Wat Ounalom, a monastery in Phnom Penh, said he had seen very few people practicing social distance at the pagoda. “Like today, [in] most of the pagodas in Cambodia, monks are sitting near each other and I think maybe because of [fewer] cases in Cambodia,” said Ven. Try, noting that there were only two active COVID-19 cases in the country. “I really hope that COVID-19 will be out of the country soon,” he added. (The Star)

Ven. Sarin Samnang, a monk at Wat Sompovmeas in Phnom Penh, said he had stopped wearing face masks because no new cases had been announced in Cambodia in weeks, although he acknowledged that a second wave of infections could occur. He admitted that the chief monk of his pagoda had instructed the monks there to wear masks and to continue practicing social distancing.

In Cambodia, there are eight gestures of Buddha – “Mutrea” means the gesture of Buddha: 1) The Vitkak Mutrea Buddha: Sitting cross-legged with one hand lain atop the other with palms facing upwards. “Vitkak” means contemplating or concentrating. This is a classical depiction of the Buddha during meditation and is one of the more familiar stances. This depiction relays the path of the Buddha, as he strove to understand and eventually alleviate, the suffering of all living things.

Buddhism is still strong among the various Cambodian refugee groups throughout the world, although some younger monks, faced with the distractions of a foreign culture, have chosen to leave the clergy and have become laicized.