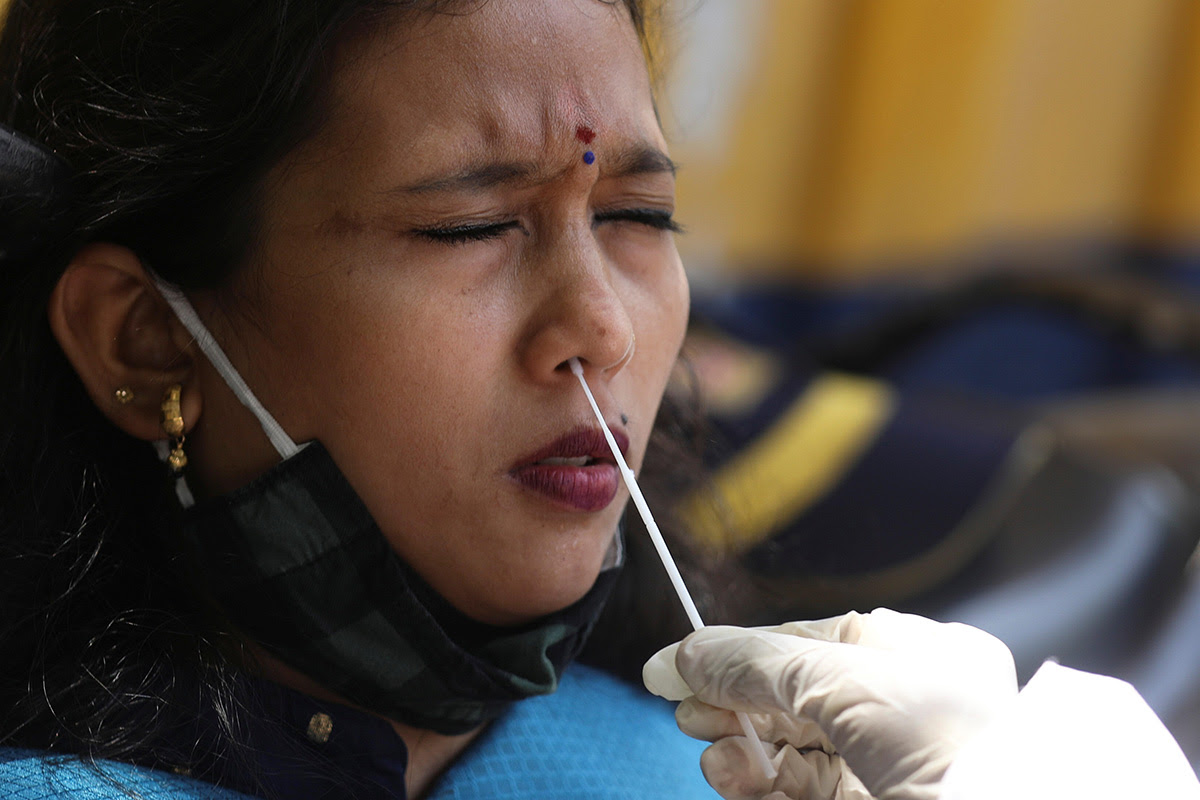 A health worker collects a swab sample from a woman during a rapid antigen testing campaign for the coronavirus disease (COVID-19), on a street in Mumbai, India, on 30 March 2021.Reuters/Francis Mascarenhas

The Centre on Tuesday said the COVID-19 situation is turning from “bad to worse” and is a huge cause for worry, especially for some states, warning that the whole country is at risk and any complacency at this stage, and at any level, will have “heavy costs”.

Asserting that hospitals and the ICUs have to be readied, the Centre also cautioned that if the coronavirus cases increase rapidly, the healthcare system in the country would be “overwhelmed”.

The Centre simultaneously asked all states and union territories to adopt a district-centric approach to fight the upward swing in cases. Each district, irrespective of whether it is seeing a surge or is with low burden, should formulate an action plan with clear timelines and responsibilities, it said.

Two top Central officials sounded the warning about the country facing an “increasingly severe and intense” coronavirus situation, as the Union Health Ministry reported that India”s COVID-19 tally climbed to 1,20,95,855 with 56,211 more people testing positive in a span of 24 hours, while 271 more fatalities pushed the death toll to 1,62,114.

“COVID-19 situation is turning from bad to worse. In the last few weeks, especially in some states, it is a huge cause for worry. No state, no part of the country should be complacent,” NITI Aayog member (Health) VK Paul told a media briefing.

“We are facing an increasingly severe and intense situation, more so surely in some districts. But the whole country is potentially at risk and therefore all efforts to contain and save lives should be taken.”

“Hospitals and ICUs have to be readied. If cases increase rapidly, the healthcare system would be overwhelmed,” Paul warned.

Health Secretary Rajesh Bhushan said eight of the top 10 COVID-19 high-burden districts of the country are from Maharashtra and that Delhi, taken as one district, is also on the list.

Though technically speaking, Delhi has many districts, but it has been taken as one district, he said.

“Where there are clusters of cases simply quarantining individuals or families will not help. In that case, larger containment zones with clear boundaries and stringent controls must be implemented,” he said.

Any complacency at this stage, and at any level, will have heavy costs, he warned.

He said many districts in the country are seeing clusters of cases emerging because of specific events and/or places where crowding happens, or where a large number of people are in close physical contact coupled with lack of Covid appropriate behaviour.

Bhushan said some districts that saw a high number of cases in August-November are again reporting a high growth rate.

” In addition, a number of new districts that saw a limited prevalence earlier are worryingly showing a surge in Covid cases. States, UTs and Districts that have current low levels of cases, however, cannot be complacent.”

The average national positivity rate during last week was 5.65 per cent.

The states and UTs that are reporting a surge in cases need to exponentially increase the number of COVID-19 tests. The proportion of RT-PCR tests need to be increased too, Bhushan said.

This means, simple public health response activities are not being followed, Bhushan said.

About the coronavirus situation in Punjab, Bhushan said in the second week of February 332 daily new cases were recorded which increased to 2,742. The average daily deaths were eight in February which has risen to 52.

“This signifies that neither are you doing an adequate number of tests nor are you able to promptly isolate (COVID-19) positive people,” the health secretary said.

The Punjab government, meanwhile, extended COVID curbs for another 10 days.

According to an official statement, Punjab Chief Minister Amarinder Singh ordered to keep schools and colleges shut by another 10 days till 10 April after officials informed him at a meeting that a fall in daily cases is expected only by mid-May and the infection numbers likely to peak around 6 April.

In his letter, Bhushan said that in most states people are not being properly isolated. “Their close contacts must be traced within three days. Close contact does not mean just the family but all those an infected person came in contact with.”

He said states have been also advised to strengthen their healthcare resources.

“Those hospitals which were made non-COVID facilities must be converted to dedicated COVID facilities. There should be no delay in strengthening private as well as public health facilities,” he added.

Registering a steady increase for the 20th day in row, active cases rose to 5,40,720 comprising 4.47 per cent of the total infections, while the recovery rate has further dropped to 94.19 percent, the Health Ministry said.

According to some experts, the relatively low count of daily jump in new cases (56,211) reported on Tuesday could be because of lower testing on account of Holi festival on Monday. India has been recording a daily spike of over 60,000 cases for a few days until Monday.