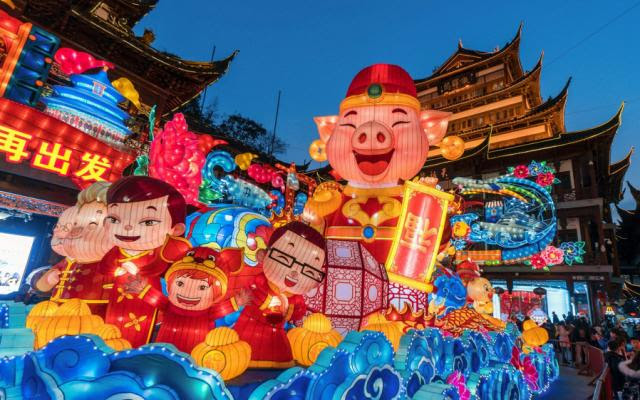 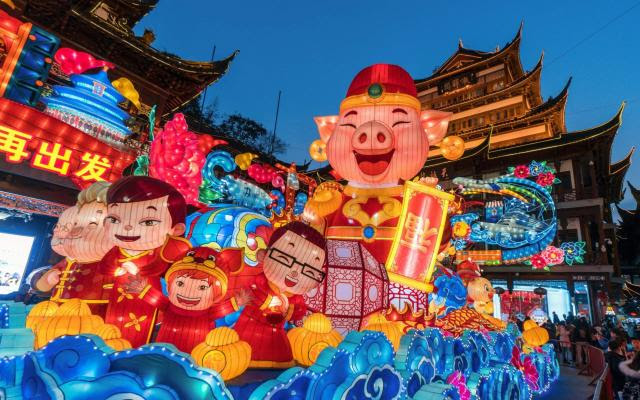 The Chinese New Year marks the start of the traditional Chinese calendar. It’s considered a big event not just in China but its neighboring countries as well. Families hold annual reunion dinner, thoroughly declutter their homes, and do ritual sacrifices to attract good fortune. The tradition is meant to bring good luck and long life to everyone in the family.

According to Chinese superstition, doing any of these on January 25th – the day Chinese New Year falls in 2020 – will lead to bad luck for the entire coming year. But it isn’t all doom and gloom: 2020 is the Year of the Rat, an animal that  symbolises wealth and the beginning of a new day.

Here is everything you need to know about the annual celebration, as well as recipes to cook for a delicious family feast and why the Year of the Rat will be more lucky for some than others.

When is Chinese New Year? 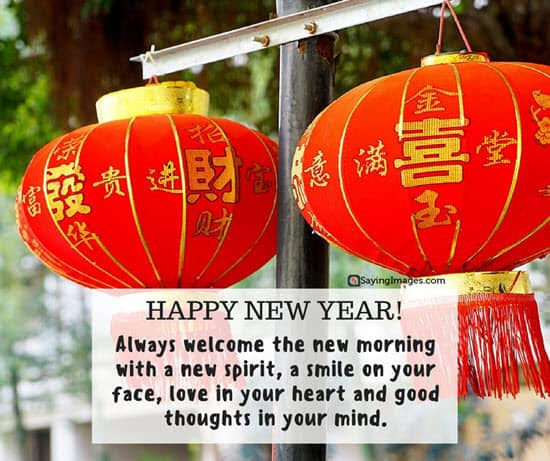 The new year, also known in China as the Spring Festival, is marked by the lunisolar Chinese calendar; this means the date changes from year to year.

The festivities usually start the day before the new year and continue until the Lantern Festival, the 15th day of the new year.

The Chinese zodiac is divided into 12 blocks (or houses) just like its western counterpart, but with the major difference that each house has a time-length of one year instead of one month.

Each Chinese New Year is characterised by one of 12 animals that appear in the Chinese zodiac – last year was the Year of the Pig.

The years allocated to each animal are in a very specific order. According to an ancient Chinese folk story, the Jade Emperor had called 13 animals to a meeting and announced that the years on the calendar would be named according to the order they arrived in. This led to ‘The Great Race’.

The rat travelled on the back of the ox, leaping from its back to nab first place. The pig stopped for a snack and a nap and arrived last; a cat was also in the race but drowned during the competition, leading to there being only 12 animals in the zodiac.

Who should be on their guard this year?

According to Chinese astrology, the year of your birth sign is believed to be one of the most unlucky years of your life. It is thought that people in their zodiac year offend Tai Sui, the God of Age, and incur his curse.

Famous names who should be wary this year include Jeremy Clarkson (1960) and Idris Elba (1972), as well as the Duke of Sussex, Katy Perry, and Scarlett Johansson (all born in 1984). 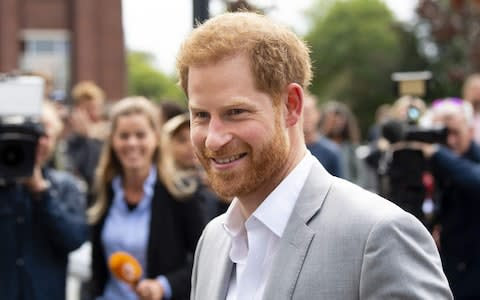 The Duke of Sussex, pictured in 2019, was born in the Year of the Rat Credit: FRANK VAN BEEK/AFP

Lucky Signs for the Rat

Lucky numbers for people born in the Year of the Rat are two and three, and their lucky colours are blue, green and gold. Their lucky flowers are lilies and African violets and their lucky directions are west, northwest and southwest.

The Personality of the Rat

People born in the Year of the Rat are characterised as smart, resourceful and quick-witted. They have great imaginations and make sharp observations, with the ability to take advantage of several opportunities.

While their weak communication skills can sometimes come across as rude, they are kind and sensitive to other people’s emotions.

They also enjoy saving their money, but this personality trait can sometimes cause them to waste their money on unnecessary things.

Why do the Chinese value rats?

Rats symbolise wealth, intelligence, success and wisdom to the Chinese. In terms of the Yin and Yang theory, they are the yang and signify the beginning of a new day. They also represent the midnight hours and the Earthly Branch Zi.

A person born in the Year of the Rat is thought to be clever, optimistic and favoured by all. In particular, men born in this year are able to adapt to new situations, while women take a caring, organised approach.

As rats tend to have a strong reproductive capacity, the Chinese say they are a sign of virility and married couples have been known to pray to them, in hope of conceiving. In fact, Chinese astrology specialists suggest that 2020, the Year of the Metal Rat, is a good time to give birth as metal symbolises stability and longevity. Those born in the Year of the Metal Rat tend to live a stable life and have the ability turn unlucky events into fortune.

In Chinese astrology, the 12 animal zodiac signs each have unique characteristics. 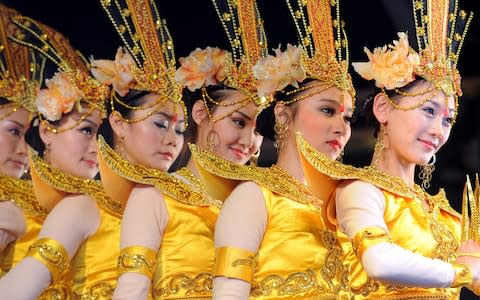 In preparation for the new year, the Chinese will clean their homes and put up red decorations and lanterns.

The celebrations will then officially kick off with a New Year’s Eve family dinner, with fish and dumplings being served to encourage prosperity.

Shou Sui, which translates as “after the New Year’s Eve dinner”, follows the traditional feast, where families stay awake throughout the night and gather for fireworks at midnight to banish evil.

Adults typically give children red packets containing money at Chinese New Year, to help them avoid the evil and wish them good health.

There are many superstitions surrounding Chinese New Year. These are to be avoided on the first day of the festival:

How to celebrate Chinese New Year in the UK

In what is set to be the biggest celebration outside Asia, thousands of people are expected to join in with the array of celebrations in London on January 26.

Colourful floats will pass through the streets of the West End and Chinatown along with dragon and lion dances, as part of the vibrant Chinese New Year parade.

Performances will also be shown in the martial arts and cultural zone on Charing Cross Road and visitors to Chinatown have the opportunity to grab a selfie with one of the Chinese zodiac animals.

Elsewhere in the country, a Chinese New Year concert will be held at the Usher Hall in Edinburgh on January 21, while the annual Dragon Parade will make its way through Manchester on January 26.

Essential spices and sauces to upgrade your Chinese cooking

From which vinegar to use to the ideal noodles and fried parcel wrappers, Kei Lum Chan and Diora Fong Chan discuss the best ingredients, spices and sauces to help create the most authentic tastes and textures.

This Shanghainese dish is made with thick, bouncy noodles like fresh Japanese udon, which are given a dark caramel tint by soy sauce and freshened up with barely cooked greens. 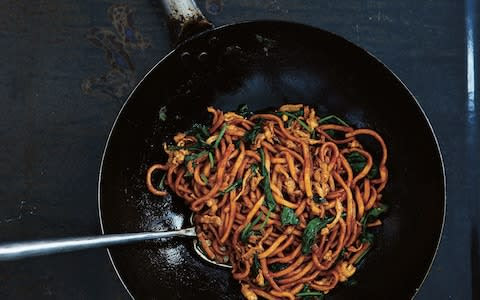 Steaming brings out a gentle, unfamiliar side to a vegetable that is more commonly fried, baked or grilled, and, simple as they are, the seasonings taste sublime.

Chef Jason Li demonstrates how to make make traditional Jiaozi dumplings, which are eaten with friends and family at Chinese New Year. 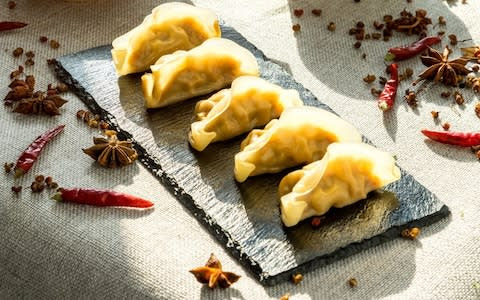 Ken Hom reveals his trick for quick, easy and tasty fried rice, inspired by the delicious version he ate at a food stall in China.

Happy New Year! Always welcome the new morning with a new spirit, a smile on your face, love in your heart and good thoughts in your mind.