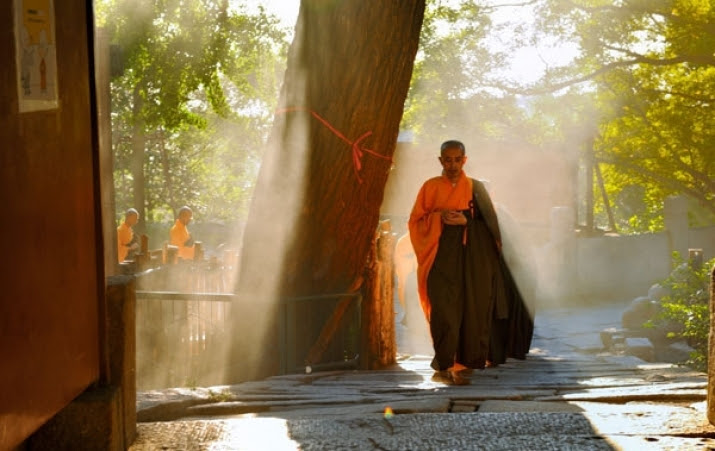 Stressed executives find the mental space for inner reflection at Longquan Monastery. From eng.longqanz.orgLongquan Monastery is located at the foot of the Phoenix Ridge, a magnificent mountain range in western Beijingwith layers of steep peaks overlooking its downtown region. First built in the early Yingli years of the Liao Dynasty in 957, with a history spanning over 1,000 years, this sacred temple has undergone myriad changes and transformations since its conception. Its history mirrors the ups and downs of China’s extensive history.

Troubled workers from China’s competitive tech sector, stressed, overworked, and burned out from the daily grind of the corporate rat race, are seeking mental and spiritual solace at an ancient Buddhist monastery on the outskirts of Beijing. Where technology and materialism have left them feeling adrift, Buddhism offers a refuge of peace in which they can quiet their minds and reconnect with themselves in a stress-free environment.

Longquan Monastery, which has a history stretching back more than 1,000 years, offers regular camps and retreats for employees of the Chinese capital’s Internet and technology companies. Participants receive basic accommodation and vegetarian meals for the duration of the retreats, during which they must surrender their phones and other digital devices, while they are taught meditation, Buddhist concepts, and engage in manual labor such as farming.

“Life in the outside world is chaotic and stressful,” says 39-year-old Sun Shaoxuan, chief technology officer at an education start-up. “Here, I can be at peace.” (The New York Times)

According to one of the monastery’s monks, Master Xianxin, many of the retreat participants are experiencing anxiety and pressure from work, technology, and hectic lifestyles. “Troubled IT workers who attend temple told us that despite advances in their careers and rapid company expansions, they suffer great anxiety and pressure,” he says. “Some have lost their life goals and are confused about the future.” (Xinhua)

“These are troubles facing many people. Unlike our Confucian ancestors who prioritized spiritual development, we now live in an era characterized by technological breakthroughs,” Master Xianxin explains. “Science and technology stress observation of the outside world, and many people today lack self-awareness.” Nevertheless, Master Xianxin is eager that Buddhism should embrace the positive aspects of digital technology rather than reject it outright: “We don’t see an inevitable clash between Buddhism and technology,” he says. “Instead, new technology can assist with the spread of Buddhism.” (Xinhua, BBC) 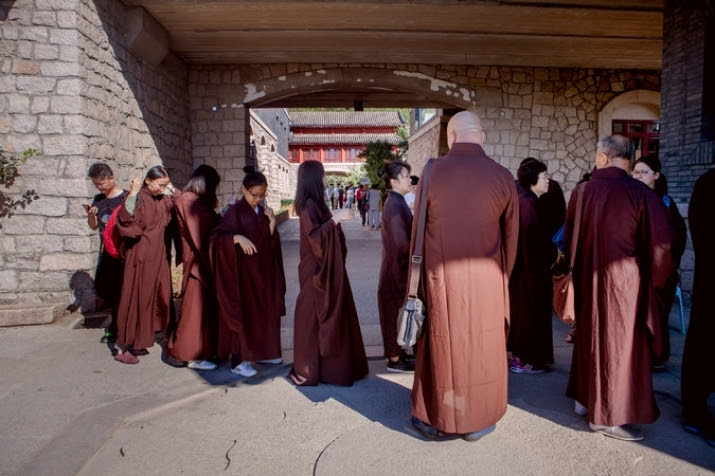 Mr. Sun, a technology entrepreneur once skeptical of religion, has come to embrace Buddhism after a spiritual awakening last year. Mr. Sun describes himself in his former life as self-centered and angry, prone to barking orders at family members and co-workers. But a three-day retreat at Longquan, during which he had to give up his smartphone and spend time meditating, attending lectures, and gardening, almost immediately made his mind feel cleaner and lighter. He and his wife now visit the temple almost every week. “When you go to the mountain, you don’t need to think: ‘Who will trick me? Who will harass me? Who will think badly of me?’” he says. “Once you have a sense of security and trust, then you will want to open up, help others and explore your beliefs.” (The New York Times)

The empathy the monks feel for their secular students may be rooted in more than Buddhist compassion—the monastery’s sangha includes perhaps some of the most highly educated monks in the world, including nuclear physicists, math prodigies, and computer programmers, all of whom have given up secular life to dedicate themselves to more spiritual pursuits.

The monastery’s chief abbot, the distinguished scholar Venerable Xuecheng, whose online microblog has millions of followers, is, like Master Xianxin, convinced that Buddhism must embrace the modern world to remain relevant. “Buddhism is old and traditional, but it’s also modern,” he said in an interview earlier this year. “We should use modern methods to spread the wisdom of Buddhism.” (The New York Times) 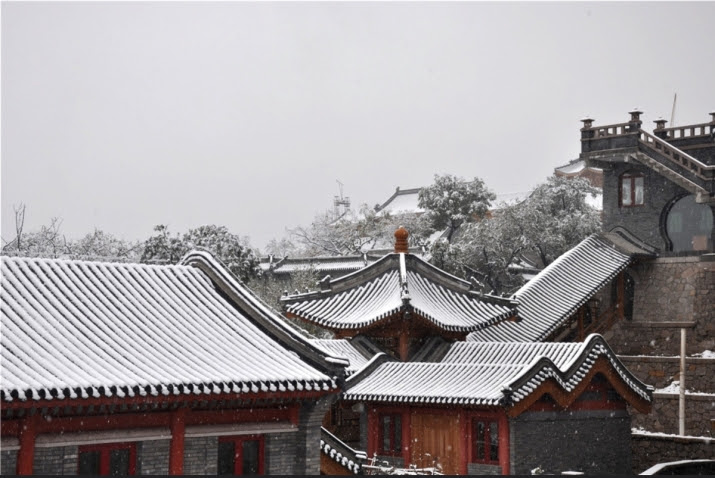 Longquan Monastery’s popularity is one expression of Buddhism’s ongoing revival among modern Chinese. From eng.longqanz.org

Longquan Monastery, located at the foot of the Phoenix Ridge mountain range on the western outskirts of Beijing, was founded in 957, during the Liao Dynasty (907–1125). Having been damaged, renovated, left to ruin, and revived on numerous occasions over its long and turbulent history, Longquan Monastery once again faded into obscurity following the Second Sino-Japanese War (1937-45) and during China’s Cultural revolution, when Buddhists were actively persecuted and temples across the country were destroyed. It wasn’t until April 2005, that the temple once again restored to life and reopened for Buddhist services.In the main courtyard, two one-thousand-year-old gingko trees and two cypress trees of similar age have witnessed the whirlwind of vicissitudes through which the monastery has gone. At the entrance is the Golden Dragon Bridge, the oldest single-arch stone bridge in Beijing. It is still in good condition today, and was built with donations collected by the Venerable Master Jisheng, the first abbot of the monastery. A stupa in his honor has been erected in the east of the monastery. Hidden in the Phoenix Ridge, there are also a number of well-known Buddhist meditation caves in walking distance from the temple.