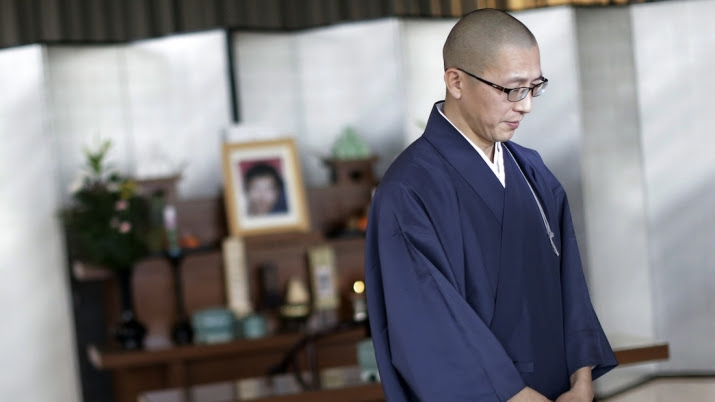 One of the emerging budget funeral services companies is Minrevi, whose services can be rented via the Amazon Japan website. A basic plan for monk, transportation and a donation offered by the Tokyo-based provider costs 35,000 yen (US$ 300).

When Amazon.com first became a part of the nascent digital landscape back in 1995, online shoppers could buy only books. In the years since, however, the online retailer’s geographical reach and the range of products on offer have expanded exponentially. In Japan, that diversity has extended to include Buddhist monks for hire, a move that many if the country’s Buddhist leaders view as an unseemly corruption of traditional practices.

The new service, Obo-san bin (Mr. Monk Delivery), which was launched by Amazon Japan last year is another manifestation of Japan’s changing Buddhist landscape, in which weakening community ties, shrinking rural populations, and a loss of faith in organized religion have resulted in a marked decline in the country’s monastic population, threatening the survival of many temples in rural areas.* Families needing a monk to perform funerals and other rites can now go online to make the necessary arrangements. Monks will typically travel to a home, funeral hall, or gravesite to perform the required ceremony, with basic plans for a monk, transportation, and a donation starting from ¥35,000 (US$345). 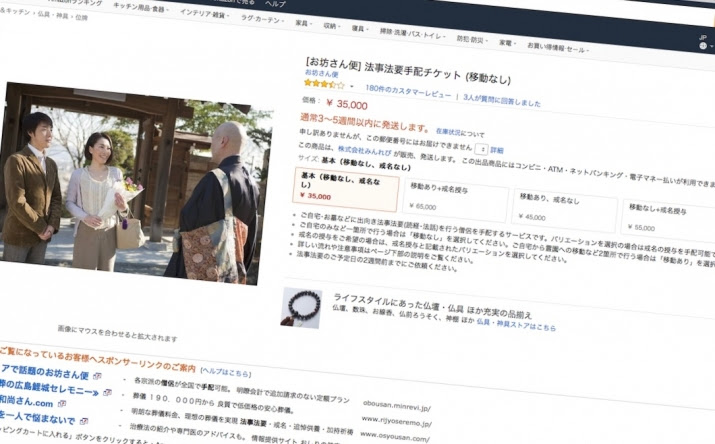 Obo-san bin services start from ¥35,000 (US$345), much cheaper than the cost of an equivalent service from a temple. From amazon.co.jp

Many Japanese, however, welcome the service as a less costly and consumer-friendly approach to the social formality of Buddhist rituals, Memorial services offered by temples comparable to the Obo-san bin can cost as much as ¥100,000, with full funeral services running to well over ¥1 million. As is common in many religious traditions the world over, Japanese Buddhists typically give donations to priests for their services.

Proponents of Obo-san bin say that traditional Buddhist temples in Japan are already operated like commercial businesses. People seeking ceremonial services often feel at a disadvantage though opaque pricing systems in which the donation is left to the discretion of the donor, which leads many to overpay. One customer, who needed a funeral service for a deceased family member, expressed appreciation that the pricing was “simple and clear,” and compared favorably with temple fees, which he had heard were “outrageous.” Another customer was similarly impressed: “It’s affordable, and the price is clear,” he said. “You don’t have to worry about how much you’re supposed to give.” (The Japan Times, The New York Times)

“We do understand there are criticisms of us as well and we take them seriously. And we must ask ourselves if and how we can change,” said Japan Buddhist Federation public relations secretary Hanyu Kakubo, conceding that many of Japan’s temples had not adapted well to social change. “We need to reflect on the fact that we’ve created this situation where people feel that they have to turn to the internet,” he said, adding: “Are we protecting our vested interests? Yes, obviously.” (The Japan Times, The New York Times) 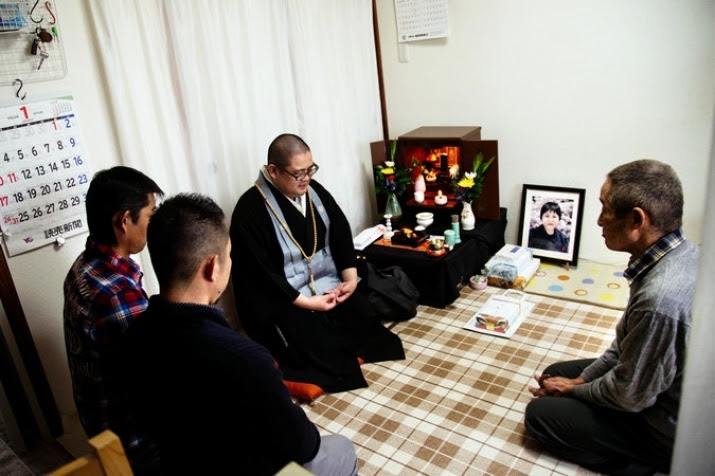 A Buddhist monk leads prayers for a memorial ceremony in a family home. Photo by Ko Sasaki. Fromnytimes.com

Kaichi Watanabe, a 40-year-old monk whose services are available through Amazon’s online portal, said he had been looking for ways to earn a living while reaching out to people to share the Buddha’s teachings. “Today, nobody comes to temples asking for us to perform [funeral rites] for their parents,” he said just before conducting a funeral service for an online customer. “I’m hoping that a service like this—a brainchild of the Internet age—could make Buddhist temples . . . more approachable . . . for everyone.”

“There is no point being a monk if we can’t offer a helping hand when someone needs us.” (The Japan Times)Many people don’t have ties with temples and they have no idea where and how to arrange Buddhist rituals, while monks are increasingly concerned about their declining temple membership,” said Minrevi spokesman Jumpei Masano as he tried to downplay accusations that the company is trying to cash in on religion. “We can cater to the needs on both sides and hopefully we can bring them together.”

In the last few weeks, about a hundred monks have come forward to register for the delivery service.