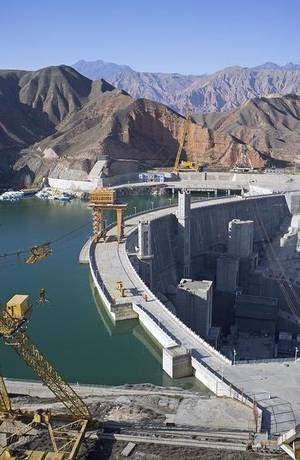 The Qinghai–Tibet Railway is a high-elevation railway that connects Xining, Qinghai Province to Lhasa, Tibet Autonomous Region of China.

China’s well-tested mantra that has powered its economic rise — build quality infrastructure and the rest will follow — is in full play in Tibet. The Qinghai-Tibet railway, the 1,956-km track passing over bridges and through tunnels, has already made history. An offshoot of that railway, also called Lari railway, is now being stretched from Lhasa to the extremities of Tibet. Trains have already reached Xigaze, the terminus of this line. That is not far from Tibet’s border with Nepal. Another track from Xigaze will head towards Yadong, a Chumbi valley town made famous by the 1904 Tibet expedition led by Francis Younghusband, a colonel in the British Indian Army. Yadong is on the doorstep of Sikkim. The Nathu La, the point of entry in Sikkim, is only 34 km away, approachable by a road from Yadong.

Apart from railways and roads, Chinese planners are also focussing on hydropower plants. Tibet is well-known as the water tower of the world. Several major rivers — the Yangtze, the Yellow river, the Lancang (better known as the Mekong), the Nu river and the Yarlung Zangpo, which becomes the Brahmaputra once it enters India — originate in Tibet. Chinese plans for massive hydro projects have triggered much concern among environmentalists, who are worried about the possible damage that this may cause to a fragile ecosystem in this natural wonderland.

Those inclined to view change purely within the spectrum of geopolitics are also nervous about Beijing’s plans. They fear that water can become a weapon for exercising China’s influence over countries that share these rivers. The Yarlung Zangpo flows into Bangladesh and India. The Lancang is the lifeline of much of Southeast Asia. The Nu flows into the Andaman Sea through Myanmar.

In tune with its plans, China has announced the construction of the Suwalong hydropower station on the Jinsha river, which forms the upper reaches of the Yangtze. The Suwalong project is located in Southwest China — on the border of Tibet’s Mangkam county and Batang county of the neighbouring Sichuan province.

Incidentally, Mangkam county, especially its Yanjing valley, has a colourful history. It is known for its traditional salt wells and over a 100 hot springs, of much therapeutic value. The area also hosted part of the famous trans-Himalayan Tea-Horse trade route that wound its way from China’s Yunnan province en route Tibet to India. With trade, came culture and religion. Earlier this year, Chinese archeologists unearthed eight Buddhist statues in Mangkam county.

Once completed, the Suwalong project would generate 2,000 MW of power, which would be channelled into the country’s well-off eastern region. The Suwalong project’s design capacity is double that of the Zangmu hydropower plant, established on the Yarlung Zangpo river. State media is signalling that right now, the Nu and Lancang could be the immediate focus of hydro projects in Tibet, rather than the Yarlung Zangpo (Brahmaputra) — the bone of contention between China and India.

Nu and Lancang rivers converge in the Mangkam county, which could well become one of Tibet’s energy production hubs. According to other official media reports, China’s ongoing 13th five-year plan is concentrating on hydropower development along the Jinsha, Nu and Lancang rivers, in view of lower electric transmission costs to high demand zones in neighbouring provinces.

In tune with its infrastructure plans for Tibet, China has announced the construction of the Suwalong hydropower station on the Jinsha river, which could generate 2,000 MW of power