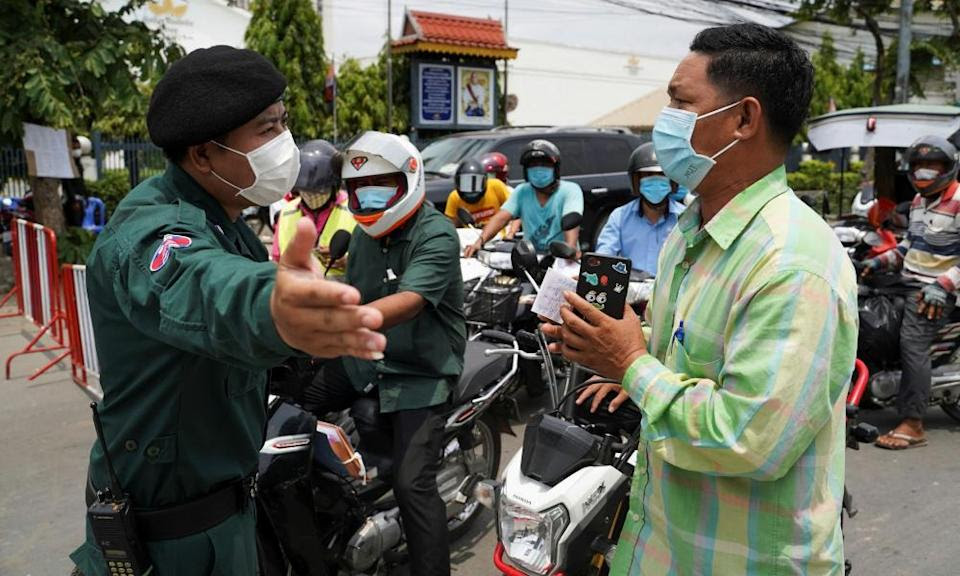 Cambodians who break Covid rules could face 20 years in prison under a new law that human rights groups say takes the country “a step towards a totalitarian dictatorship”.

Prime minister Hun Sen warned that Cambodia was “on the brink of death” as a two-week lockdown was imposed in Phnom Penh on Thursday to try to control the spread of the virus.

The law means those convicted could face fines of up to $5,000 (£3,627) as well as prison terms, and grants the government the power to ban or restrict any gathering or demonstration indefinitely.

“For the Cambodian people, the Covid-19 pandemic has been not only a public health and economic tragedy, but also a human rights disaster courtesy of a government determined to move the country step by step towards totalitarian dictatorship,” said Phil Robertson, deputy director of the Asia division at Human Rights Watch.

Sopheap Chak, executive director at the Cambodian Center for Human Rights, said the new law, which was introduced last month, lacked transparency, used “vague and broad terminology” and had no oversight.

She said: “The law’s ill-defined offences open the door to subjective interpretation and arbitrary enforcement, and the disproportionate criminal sanctions they carry represent a threat for critical and dissenting voices in Cambodia, against whom the repressive legislative framework has frequently been used as a weapon in recent years.”

Cambodia has among the fewest coronavirus cases in Asia, but an outbreak that started in late February has seen cases rise to 5,480 within two months and 38 fatalities.

Police have barricaded areas in Phnom Penh to prevent people from travelling over Khmer New Year and checkpoints were set up between areas under lockdown.

“Please my people – join your efforts to end this dangerous event,” the prime minister said in a recorded address on state-run television on Wednesday night.

“We are on the brink of death already,” he said. “If we don’t join hands together, we will head to real death.”

A group of UN special rapporteurs has written to the prime minister calling for a review of the legislation, expressing “serious concern” over measures that undermine fundamental human rights, including freedom of movement, peaceful assembly and the right to work.

At least four people had been arrested since the “law on measures to prevent the spread of Covid-19 and other serious, dangerous and contagious diseases” took effect, and several others had been sent to quarantine, the UN experts said.

Robertson said dozens of people had been arrested and held in pre-trial detention for criticising the government’s Covid response.

In a statement, the senate said the law was aimed at protecting public health and mitigating the socioeconomic impact of the pandemic.

“The law demonstrates the government’s willingness to assume greater responsibility for the protection of people’s lives, security and public order as the country faces threats by Covid-19 and other contagious diseases,” it said.

While noting the challenges for any government dealing with a pandemic, Rhona Smith, the UN special rapporteur for Cambodia, told the Guardian: “[The law] is unnecessarily punitive and it’s difficult because most people won’t be able to pay the fines.”

She added: “It’s a matter of public record that prisons in Cambodia are massively overcrowded. The government is aware but if they start putting people into prison for Covid violations, that adds further to overcrowding and also to concerns about the potential of spread of Covid-19 through prisons.”

Smith and her UN colleagues are concerned that fears over the use of their personal data will deter people from getting tested, or vaccinated. Since 3 April, the Phnom Penh city administration has published private details of 976 people who tested positive for the virus, including their name, age, workplace and address.

Authorities in other provinces are also publishing personal information. “The public disclosure of personal data, including names of those who have contracted the virus, is a deplorable breach of the right to privacy and can lead to discrimination and stigma,” the experts said.

Human rights groups fear the law and other measures taken since the pandemic began are a sign that human rights are disintegrating in Cambodia.

“This law is in line with Hun Sen’s continuous approach to use the Covid-19 crisis to increase his authority and control over Cambodia, and see into the law books quite expansive powers that he can employ virtually at will,” said Robertson.