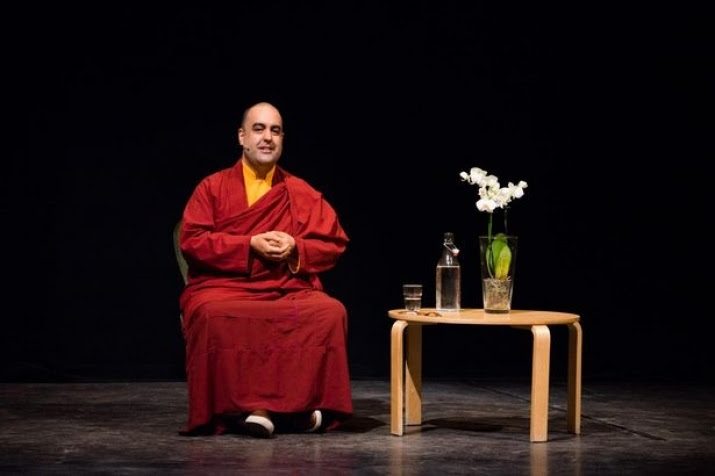 Venerable Gelong Thubten. From walesonline.co.ukGelong Thubten has been a Tibetan Buddhist monk for more than 20 years. He teaches monthly classes at Google’s headquarters in Dublin and says there are three ways that mindfulness can help you at work.Stress Reduction,Mental Clarity,Compassion and empathy.

Venerable Gelong Thubten, a Buddhist monk of the Tibetan tradition and a mindfulness teacher based in the United Kingdom, has been actively involved in teaching mindfulness meditation at businesses, schools, and prisons for years. However, his latest students are somewhat more glamorous, including top Hollywood stars Benedict Cumberbatch and Tilda Swinton, and other cast members of the recent Marvel Cinematic Universe blockbuster Doctor Strange, which hit theaters in October.

British actor Tilda Swinton, who plays the mystical character the Ancient One in Doctor Strange and is also a friend of Ven. Thubten, invited the monk to get involved in the film, which is themed around the idea of mind training. “I introduced him to the project and he’s been hanging out with us and teaching everybody, if they don’t know, about mindfulness and about how to still the mind,” Swinton said. (Reuters)

Ven. Thubten accepted the invitation and subsequently spent time on the set of the film in London, teaching mindfulness to the cast and crew. “I said yes, but I didn’t realize I’d end up there all the time during filming. It was great fun,” said Ven. Thubten, who also directs the Samye Foundation Wales in the UK. Ven. Thubten was even able to attend last month’s premiers for the film in London and Los Angeles. (Yorkshire Coast Radio) 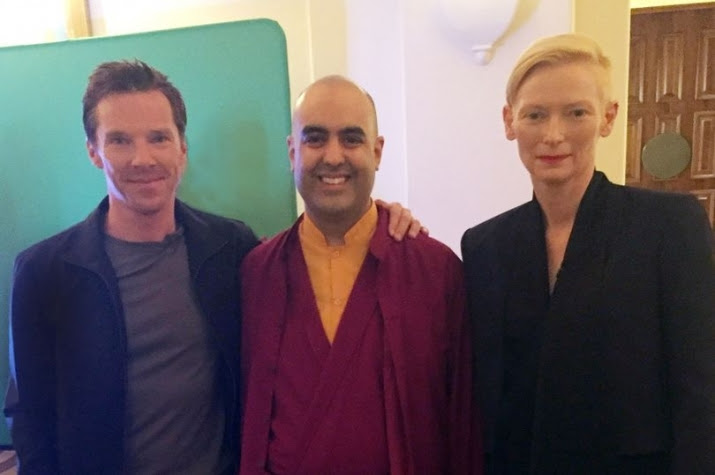 Benedict Cumberbatch, who plays the titular superhero, is also not new to Buddhism and has previously worked on mindfulness-related projects. Cumberbatch expressed his appreciation for the on-set mindfulness training provided by Ven. Thubten during filming. “As an actor it’s great because it brings you into that moment of stillness and presence. You’ve got a lot of people demanding your attention in filmmaking,” said the star of The Imitation Game (2014) and the narrator of the forthcoming Walk With Me, a documentary about the monastic community of Zen monk and teacher Thich Nhat Hanh, due to be released next year. (Reuters)

Talking about his experience working on the set of Doctor Strange, Ven. Thubten conceded that it was quite unusual for a Buddhist monk to end up in Hollywood. During breaks in filming, Ven. Thubten said he would gather the actors and have them practice mindfulness, which helped to prepare their minds for the next shoot. “It was an interesting challenge to practice mindfulness on quite a noisy set with 400 crew members rushing around,” he recalled. Admitting that working with the actors had given him a unique opportunity to promote mindfulness, Ven. Thubten also observed that, like the fictional superhero’s mystical abilities, mindfulness is about the power of the mind: “The film presents the idea that you can create your reality with the power of your thoughts, and that the mind has limitless potential.” (Wales Online) 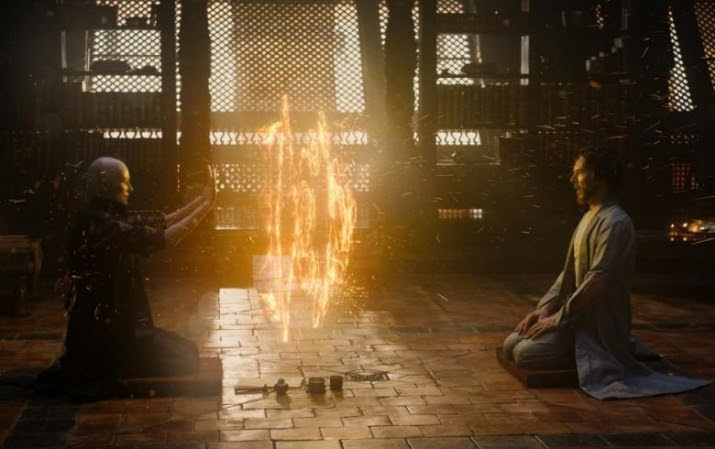 Swinton and Cumberbatch in a still from Doctor Strange. From indiewire.com

According to Kagyu Samye Ling Monastery, Ven. Thubten has been a monk for 24 years and has received extensive meditation training from some of the world’s most accomplished practitioners. He also has spent more than five years in intensive meditation retreats. Ven. Thubten does not accept payment for his work, but encourages his clients to make donations to the Rokpa Trust charity, which runs projects to help the community and of which he is also a trustee.

• Buddhism is one of the world’s most tolerant and logical faiths, marked out by its non-violence and lack of dogma

• There is no worship of a God, Individuals seek their own path to enlightenment, or Buddha-hood

• Buddhists do not believe in a pre-ordained fate, everyone is offered the possibility of change

• Buddhism is essentially positive: it regards people as naturally good There are three main aspects to Buddhist practice: doing no harm; wholesome actions; and training the mind through meditation