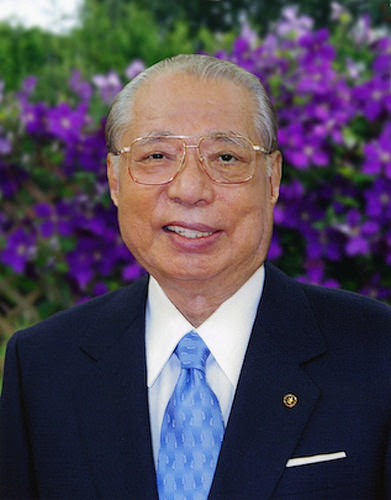 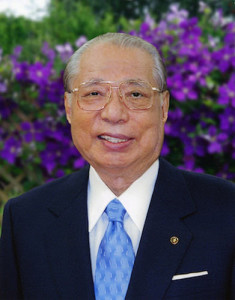 The Great Path to Peace,” Daisaku Ikeda, the president of Japan”s Soka Gakkai International (SGI) lay Buddhist association, urged concerned parties to intensify efforts to respond to the needs of humanity’s most vulnerable, including those displaced by conflict and natural disasters.

Daisaku Ikeda, 88, is a Buddhist philosopher, educator, author ,  and anti-nuclear activist. He was the third president of the Soka Gakkai Buddhist movement, from 1960–79, and is the founding president of SGI.
In the statement, released to the international community annually, the SGI president called for a greater focus on protecting children uprooted by conflict and meeting their educational needs. “The irony of humanitarian crises is that the deeper the gravity of people’s plight, the less they are heard,” Ikeda said. (Soka Gakkai International)
He urged further support for countries that have admitted large numbers of refugees fleeing armed conflict and emphasized human rights education as a vital tool for overcoming racism and discrimination.
The statement also praised the United Nations’ September 2015 resolution, which laid out the new Sustainable Development Goals (SDGs) covering a broad range of sustainable development issues, including ending poverty and hunger, improving health and education, making cities more sustainable, combating climate change, and protecting oceans and forests. Ikeda highlighted the 2030 Agenda for Sustainable Development’s explicit focus on protecting the dignity and fundamental human rights of displaced persons and international migrants.
The statement touched upon Ikeda’s long-standing call for nuclear disarmament as well as urging stricter regulation of the global trade in conventional arms through strengthening the multilateral Arms Trade Treaty that went into force in 2014.
Highlighting North Korea’s claim of a successful hydrogen bomb test on 6 January, Ikeda proposed that the G7 Foreign Ministers Meeting to be held in Hiroshima in April should discuss the potential humanitarian impact of nuclear weapons as well as the possibility of a denuclearization initiative in Northeast Asia. Ikeda’s statement pointed to the inherent contradiction of drawing up global initiatives aimed at protecting and improving the rights and well-being of all people—such as the SDGs—when even a “limited” nuclear conflict could “render meaningless in an instant all of humankind’s efforts to resolve global problems.” (Soka Gakkai International)
Soka Gakkai is a Japanese Buddhist religious movement founded in 1930 and based on the teachings of the 13th century Japanese priest Nichiren (1222–­82), who taught devotion to the Lotus Sutra, believed to contain the teachings given by the historical Buddha, Shakyamuni, towards the end of his life, as the exclusive means to attain enlightenment. Soka Gakkai bases its teachings on the Lotus Sutra, with the mantra “Nam Myoho Renge Kyo” (“Devotion to the Mystic Law of the Lotus Sutra” or “Glory to the Sutra of the Lotus of the Supreme Law”) as its main devotional practice.
Share this...