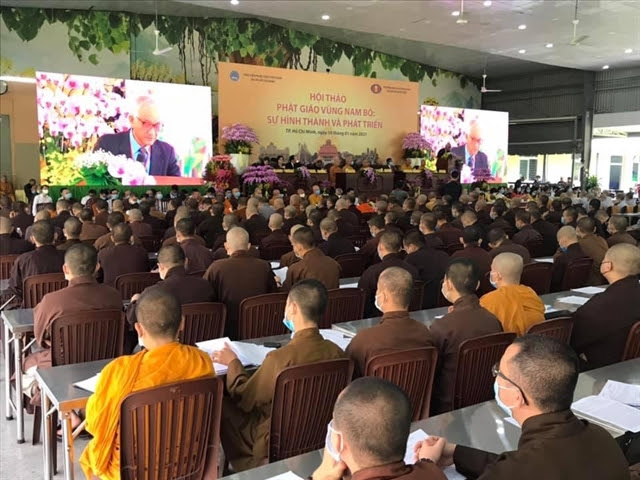 The “Buddhism in Southern Region of Việt Nam: Establishment and Development” Conference was organised on Sunday by the Vietnam Buddhist University in co-operation with HCM City University of Social Sciences and Humanities. VNS Photo Gia Lộc

Buddhism has a great influence on the thinking and behaviour of Vietnamese people. For them it is not only a religion, but also a way of life that emphasizes disconnection to the present. People believe that “to the same degree, they reap today what they have sown in the past”. In other words, they believe in rebirth and that their present life is a reflection of actions in a previous life.

Promoting patriotic traditions and positive human values, Việt Nam Buddhism has made many contributions to society in different fields, Nguyễn Phúc Nguyên, head of the Department of Buddhist Affairs – Government Committee for Religious Affairs, said at a conference held on January 10.

Buddhism had encouraged solidarity among the people and developed ethical and humane values, Nguyên said.

Dr Trần Đức Cường, chairman of Vietnam Association of Historical Sciences, said: “Buddhism entered Việt Nam more than 2,000 years ago. Buddhism has become an indispensable part of Vietnamese culture. The profound human values together with the cultural values of Buddhism have continued to affect the ideology and lifestyle of the people. It encourages people to build and protect the good traditions of the Vietnamese. It promotes people, guides goodness, and builds a peaceful society.”

“It maintains and promotes traditions, national solidarity and community harmony,” Cường said, adding that through social activities, along with many other religions, Vietnamese Buddhism has strengthened solidarity between religion and life among all classes of people, contributing to educating and promoting the community spirit and collective strength.

In modern society, when ethnic and religious conflicts take place in many countries in the world, the philosophy and practice of the model of a harmonious and solidarity community of Vietnam Buddhism is a positive example because it wants to direct people to a good life filled with love, peace and friendship, and cooperation for mutual development, he said.

The Most Venerable Thích Trí Quảng, first deputy supreme patriarch of the Vietnam Buddhist Sangha, rector of Vietnam Buddhist University, said: “Right from the establishment of the Southern land, Buddhism was present in the spiritual life of residents there, co-working closely in reclaiming, building, and creating hamlets, and contributing an important part in the development of a beautiful and rich land with the high potential and a diverse spiritual life.”

Currently, the Southern region is undergoing a renovation process in the context of globalisation with the explosive development of science – technology and economic institutions, according to Quảng.

These trends present the Southern region with many opportunities for breakthrough development, but also pose many serious challenges.

“It is the risk of breaking and losing cultural identity in international integration and pushing a large part of people to be hurt by their own loneliness. The duality of the globalisation process is inevitable and requires that we pay more attention to happiness, culture and people as the foundation of all perspectives, the socio-economic development strategy and plan of the Southern region,” he added. Ambassador from Sri Lanka to Việt Nam Prasanna Gamage said: “Việt Nam was, and still is, a profoundly Buddhist country. The Sangha are very involved in the community, and temples often run schools, orphanages, medical clinics, and homes for the disabled. Lay people play an important role in religious life.”

“The Buddha’s message of equality, for today’s divided world, is more important than ever. This world is replete with poverty, discontent and suffering. The loving kindness, non-violence and peaceful existence that the Buddha taught are fundamentally relevant. Let us take it upon ourselves to bring such practices back to life.”

The “Buddhism in Southern Region of Việt Nam: Establishment and Development” Conference was held by the Vietnam Buddhist University in co-operation with the HCM City University of Social Sciences and Humanities.

At the conference, the two universities signed an agreement to co-operate in training, researching and publishing reference books in Buddhism.

Buddhism came to Vietnam by the maritime route from India and from China by land. Those who first carried this religion to Vietnam seem to have been refugees from persecution in China and religious pilgrims from India.