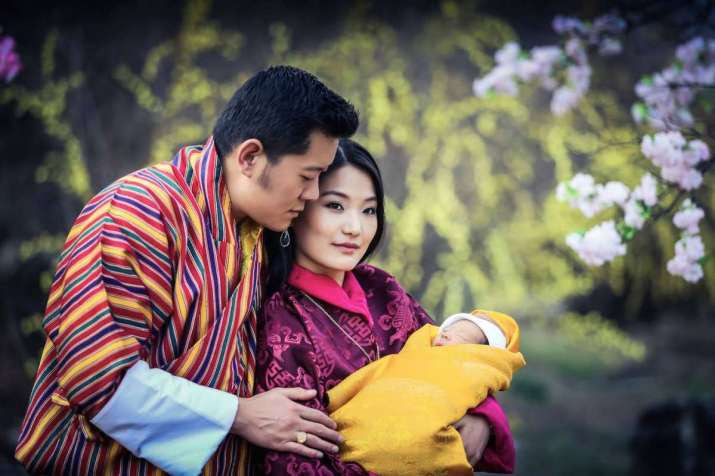 His majesty Jigme Khesar Namgyel Wangchuck and her majesty the queen consort Ashi Jetsun Pema From drukasia.com
Bhutan is known as Drukyul which translates as “The Land of the Thunder Dragon”. Thus, while Kings of Bhutan are known as Druk Gyalpo (“Dragon King”), the Bhutanese people call themselves the Drukpa, meaning “Dragon people”.The current ruler of Bhutan is Jigme Khesar Namgyel Wangchuck, the 5th Druk Gyalpo.[2] He wears the Raven Crown which is the official crown worn by the kings of Bhutan. He is correctly styled “Mi’wang ‘Ngada Rimboche” (“His Majesty”) and addressed “Ngada Rimboche” (“Your Majesty”).King Jigme Khesar is the second-youngest reigning monarch in the world.

Their majesties the king and queen of the Himalayan kingdom of Bhutan have announced that they are expecting their second child. His majesty Jigme Khesar Namgyel Wangchuck, the Druk Gyalpo or “Dragon King” of Bhutan, made the announcement in a royal address in December at Changlimithang Stadium in the capital Thimphu before a capacity crowd, who had gathered to celebrate Bhutan’s 112th National Day.

Upon hearing the news, the 30,000 people assembled in the stadium reportedly responded with an ecstatic cheer of approval. The Bhutanese newspaper Kuensel reported that the announcement created such excitement that its journalists had difficultly interviewing people on any other issue. No details were announced about the expected birth date.

Well-wishers described the news of a second royal child as a gift from the throne and an auspicious sign for the years to come. “It was the best National Day gift that we could expect,” said Jangchub Choden from the eastern town of Trashiyangtse. (Kuensel)

Remote, landlocked, and perched in the rarified air of the eastern Himalaya, sandwiched between two political and economic heavy hitters India and China, Bhutan is the world’s last remaining Vajrayana Buddhist country. The ancient spiritual tradition is embedded in the very consciousness and culture of this remote land, where it has flourished with an unbroken history that dates back to its introduction from Tibet by Padmasambhava, also known as Guru Rinpoche, in the eighth century.

Following the announcement of the royal pregnancy, Buddhist prayers were held for the health of Her Majesty the Queen Consort (Druk Gyaltsuen or “Dragon Queen”) Ashi Jetsun Pema. The king said that the royal couple, who were married in 2011, felt extremely fortunate and were “excited beyond words” about the impending arrival of the Royal child. (Kuensel)

The royal couple’s first child, the Crown Prince Jigme Namgyel Wangchuck, was born on 5 February 2016. In March 2016, the people of Bhutan planted 108,000 trees In honor of his birth.* Prince Jigme is expected to become the sixth Druk Gyalpo of Bhutan.

Bhutan is regularly ranked among the happiest countries in the world. With a population of just 770,000, according to government data for 2017, it is also one of the world’s smallest and least industrialized countries, yet it has significant experience in maintaining the delicate balance of managing economic growth in a sustainable manner, famously encapsulated in its conservative “Gross National Happiness” (GNH) approach to economic development.

Bhutan’s philosophy of GNH was introduced in the late 1970s by the country’s fourth king, Jigme Singye Wangchuk, drawing inspiration from the kingdom’s traditional Buddhist culture. An alternative to traditional metrics for measuring national development, such as gross national product (GNP) or gross domestic product (GDP), GNH is founded on four underlying principles or “pillars:” good governance, sustainable socio-economic development, the preservation and promotion of culture, and environmental conservation.

While not opposed to material development or economic progress, GNH rejects the pursuit of economic growth as the ultimate good, instead seeking to cultivate a more holistic approach to balanced development and societal well-being, translating cultural and social priorities into developmental goals to create a happier, more equitable society.

Almost 75 per cent of Bhutan’s population of some 770,000 people identify as Buddhists, according to data for 2010 from the Washington, DC-based Pew Research Center, with Hinduism accounting for the majority of the remaining 25 per cent. Most of Bhutan’s Buddhists follow either the Drukpa Kagyu or the Nyingma schools of Vajrayana Buddhism. Bhutan held its first elections as a constitutional monarchy in 2008.

The young King, like his father, is popular at home and overseas. Together with the Queen, they travel internationally and have raised the profile of Bhutan as a sovereign country. The fifth Druk Gyalpo has gained the respect of his people, and proved that he will continue to promulgate the democracy his father had championed for during his reign.