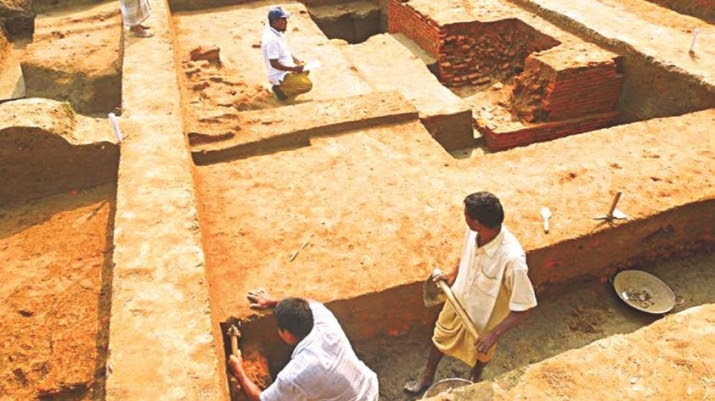 Excavating the 900-year-old Buddhist temple at Dharmapalagarh. From thedailystar.net

The Bangladesh government’s Department of Archaeology has unearthed a 900-year-old Buddhist temple. Working with a team of 20 diggers, the archaeologists began the excavations in the Jaldhaka sub-district of Nilphamari District on 1 January as part of an annual state archaeological program, and have discovered several clay pot shards, white marble slabs with motifs, and a substantial wall, said team leader Mujibur Rahman, custodian of Mahasthangarh Museum in Bogra.

The unearthed wall is 25 meters (82 feet) long and 0.85 meters (33 inches) thick, said Rahman, adding that the main structure of the temple was encircled by a 1.2-meter-wide passageway along which devotees would once have walked as part of their ritual practices. He noted that the upper portion of the temple was in ruins and some parts of the basement remained buried.

Team member SM Masanat Bin Islam, who is assistant custodian of Mahasthangarh Museum, said bricks unearthed at the temple site resembled those found at Mahasthangarh in Bogra District, one of the earliest urban archaeological sites so far discovered in Bangladesh, which contains the remains of an ancient city dating to at least the 3rd century BCE.

The archaeologists believe the temple was built in the 12th century during the Pala empire, which existed between the 8th and 12th centuries in ancient Bengal. The government declared the area, comprising some 30 acres, a reserved archaeological site in 1987 in recognition of its significance, naming it Dharmapalagarh after Dharmapala, the second ruler of the Pala empire, who established his capital there.

Abu Sayed Inam Tanvirul, custodian of Rangpur Museum in Bangladesh’s Rangpur District, noted that Dharmapalagarh had been visited by British archaeologist Dr. Francis Buchanan (1762–1829), who surveyed and mapped the area in 1807–8, paving the way for future excavations.

Golam Mostofa, a legislator from Nilphamari-3 constituency, said he had highlighted the significance of the excavation to the government: “I [have] asked the government to undertake a project for the extensive excavation in the area as the archaeological evidences of Dharmapalagarh may contribute to the study of history.” (The Daily Star) Carbon-14 dating of 26 relics found at the Nateshwar dig suggests that the site is more than 1,100 years old. From thedailystar.net

Prof. Mustafizur Rahman of Jahangirnagar University, who is research director of the excavation, said carbon-14 testing of 26 relics found at the dig suggested that the site was more than 1,100 years old. Rahman expressed high expectations that Nateshwar would eventually form part of a World Heritage site.

Last year, the same team excavated a 1,300-year-old Buddhist city on the eastern side of the site, which is adjacent to Vajrayogini Village, the birthplace of Buddhist scholar and philosopher Atish Dipankar (980–1053), a major figure in the promulgation of Mahayana and Vajrayana Buddhism in Asia in the 11th century.