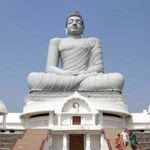 VIJAYAWADA: Vijayawada is all set to create a world record by orchestrating global chant for world peace with around 1,000 monks during Amaravati Buddhist Conclave from February 3 to 5, Tourism Minister Bhuma Akhila Priya Reddy has said. Holding a review meeting with the officials concerned here on Wednesday, Akhila Priya said Tibetan spiritual leader Dalai Lama will be attending the Buddhist Heritage festival to be hosted by the Andhra Pradesh Tourism Authority in Vijayawada.She said the three-day festival will see the monks, students , bureaucrats and politicians participating in the festival. Also, a heritage walk, performance by Shaolin monks of China and cultural programmes by artistes will also be arranged.