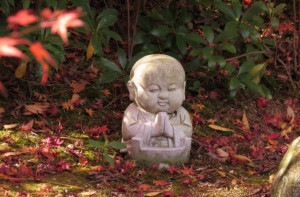 Widely revered in Japan, Jizo Bosatsu is known as the protector of children and travelers.

Traditional families living in a village in a mountainous region of western Japan have for centuriespassed down a curious Buddhist practice known as “Mikka Jizo” (Three days of Jizo), named after one of the most revered bodhisattvas in Mahayana Buddhism.

In Nyucho District, some 12 miles from downtown Nara, a pair of Jizo statues are carried between homes every three days, during which prayers are offered to the bodhisattva for the healthy lives of the children of the village. Once the statues have spent three days and nights in one home, a member of the household passes them into the care of the next home at dusk, borne inside a wooden altar, or zushi.

The practice is a low-key affair—apart from the home that is holding the statues and the household that transferred them, nobody knows where the statues are enshrined at any given time. If for any reason members of the household responsible for the statues are unable to carry the zushi, the transfer can be postponed until the next opportunity. About 50 homes in Nyucho are involved in the Mikka Jizo practice, the origins of which have been lost to time. It is not known how it survived the Meiji Restoration era (1868–1912), when a movement to abolish Buddhism and establish Shinto as the state religion emerged. During this period, Buddhist temples were demolished and all Buddhistservices were eliminated from the village. Even today, funeral ceremonies in Nyucho are carried out in the Shinto style.

Eighty-five-year-old Nyucho resident Sazako Nakakubo recalled the role Jizo had played in her marriage 60 years earlier. “I was told to wish for a healthy baby to the statues when I married into the family,” Sazako said, adding that she had subsequently instructed her daughter-in-law, Kazuyo, who married her eldest son, to continue the practice. (The Asahi Shimbun) 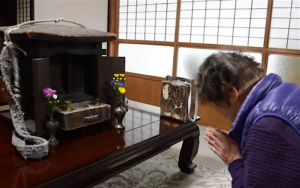 Sazako Nakakubo welcomes the zushi containing two statues of Jizo that has just arrived at her home.

Kazuyo, 64, confirmed that the tradition would continue for some time to come. “Tomorrow, my son will visit us with his wife, whom he married in autumn last year, so she will offer a prayer to the statues for the first time,” she said cheerfully. (The Asahi Shimbun)

Widely revered in Japan, Jizo Bosatsu (Skt. Kshitigarbha Bodhisattva), usually depicted as a shaven-headed monk, is known for his two vows: to take responsibility for the instruction of all sentient beings between the death of Shakyamuni Buddha and the advent of Maitreya, the future Buddha of this world, and to postpone his own Buddhahood until all hells are emptied. Jizo is also known in Japan as the protector of children and travelers. In the Himalayan tantric schools of Buddhism, he is recognized as one of the Eight Bodhisattvas, represented as a crowned, bejeweled figure seated on a lotus and holding a sacred jewel in his right hand.Lotus flower considers as auspicious especially godess Lakshmi people pray in Indian culture also.

Linkedin
Peppermint tea may help improve your memory: study The Weight Loss Wonder That Is Sitting on Your Spice Rack