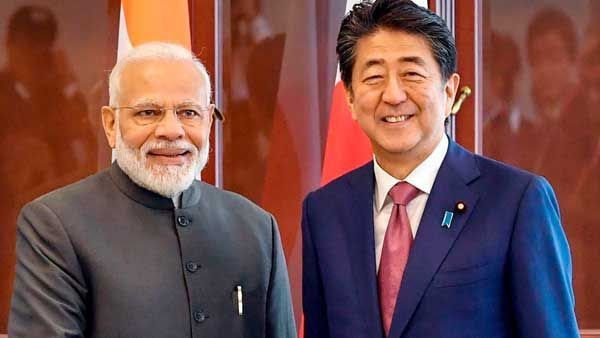 A much anticipated summit between Prime Minister Narendra Modi and Japanese Prime Minister, Shinzo Abe is scheduled to take place next month.

The summit would witness the signing of the Acquisition and Cross Servicing Agreement (ACSA). The meeting that comes at a time when India and china are locked in a face-off is likely to take place on September 10.

The Acquisition and Cross Servicing Agreement (ACSA) statute (formerly known as “NATO Mutual Support Act”) was enacted to simplify exchanges of logistic support, supplies, and services between the United States and other NATO forces.

At the end of the bilateral summit meeting in Tokyo between the two leaders in 2018, both countries agreed to begin formal negotiations on the ACSA. This would allow the Indian military and the Japan Self Defence Force to use each other’s bases for logistic support. “The two leaders welcomed the joint exercise between each of the three services and the commencement of negotiations on the Acquisition and Cross-Servicing Agreement (ACSA), which will enhance the strategic depth of bilateral security and defense cooperation,” the joint statement read.

The ACSA would permit the Indian Navy access to a Japanese base in Djibouti. The Japan Maritime Self Defence Force would be permitted to use India’s military installations on the Andaman and Nicobar Islands located in the Indian Ocean.

The ACSA was first discussed during the annual India-Japan Defence Ministerial Dialogue held at New Delhi in August 2018. It was also on the agenda of the Indian National Security Advisor, Ajit Doval and his Japanese counterpart, Shotaro Yachi held at New Delhi in September 2018.

The joint statement by the Prime Ministers also said, “recognizing that enhanced exchanges in expanding maritime domain awareness (MDA) in the Indo-Pacific region contributes to regional peace and stability, they welcomed the signing of the Implementing Arrangement for deeper cooperation between the Indian Navy and the Japan Maritime Self-Defense Force (JMSDF).”

The meeting of Modi and Abe is important also in the context with the tensions with China. The issue regarding the Chinese would figure in the talks. The expansion drive by China is not just limited to Ladakh. It has also caused concerns for Japan over the ownership of the Senaku Islands. Abe too is under pressure from his Cabinet to take a tough stance on China.

China’s territorial hunger and thirst of strategic expansions has ruffled the wrong feathers not just with India but also countries sharing the waters of East China Sea. Japan, for instance, has been fairly a global player since the World War but the tables have considerably turned in these 75 years.

There’s a storm brewing and China is once again at the centre of it, guiding the wind and steering the vessel. Only this time it’s not India.

East China Sea is a crucial stretch of contention between China and Japan and the Red Dragon’s advancements and disputed claims over the Senkaku/ Diaoyu islands could possibly spark a new political tension in Asia in the coming years.

While China shares its borders (land and sea) with 14 countries, it is at loggerheads with most of them, including islands such as Taiwan.

Tensions around the East China Sea stretch, roughly 1,200 miles (1,900 kilometres) southwest of Tokyo, have been brimming for years. With both countries claiming over the region for hundreds of years, neither Japan nor China is expected to pull their mast down over the territory which is considered “a national birthright” in both Beijing and Tokyo, according to CNN.

Both claim authority over the uninhabited islands, known as the Diaoyus in China and the Senkakus in Japan, but Japan has administered the area since 1972.