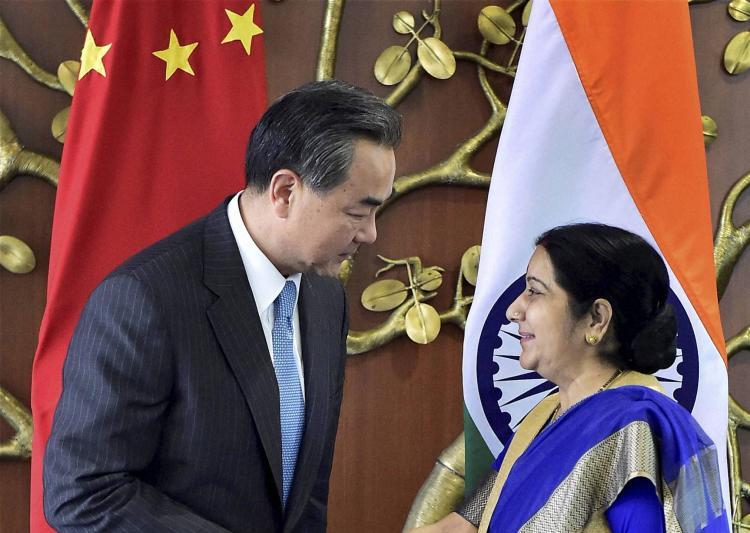 China’s idea of bilateral relations seems to be to aggressively push their national interests while dismissing India’s concerns as unimportant.

Chinese foreign minister Wang Yi was in Delhi on August 13, 2016 for talks with his counterpart, external affairs minister Sushma Swaraj. As is customary, Wang also had an audience with Prime Minister Narendra Modi. The main purpose of Wang’s visit, according to Xinhua news agency, was to “conduct strategic communications with India”. So what did the Chinese minister wish to convey, what did he seek from India and did he succeed in his mission?

Conversations between Modi, Swaraj and Wang are, of course, not in the public domain. Neither have these conversations been spelt out in great detail by either side. But, reading between the lines, the contours are ever so slightly visible.

This must also be placed alongside the current state of the overall relationship between the two countries for better appreciation. There is no doubt that after the Nuclear Suppliers Group episode and the earlier “technical hold” that China had placed on India’s application to include Jaish-e-Mohammed chief Masood Azar in the UN sanctions list, bilateral relations are considerably tense. Needlessly, the Chinese have brought themselves to this pass by looking the other way when their “iron friend” indulged in thoughtless adventurism by encouraging terrorist attacks against India.

The Chinese press (Xinhua) maintains that at the end of Wang’s visit, a “consensus” was reached. The “two sides agreed to strengthen mutual support over the successful organization of the upcoming G20 and BRICS Summits” and that China is willing to “boost mutual support with India towards this end”. The Chinese have also made it clear that the South China Sea issue was of vital national concern and that India should “fully comprehend Beijing’s concerns”. In other words, a warning for India: Do not take any stand on the dispute that hurts China’s interests, as there may be other side-effects! Probably what Wang had in mind was that the phrase used in the joint communique issued at the end of the foreign ministers’ trilateral meeting (Russia, China and India) in Moscow earlier this year could be used once again. According to the Chinese, India had agreed that the South China Sea issue be addressed through talks between the parties concerned. Has India agreed to this formulation for the G20 and BRICS summits? The Chinese seem to be hinting that this is so.

As for India’s concerns regarding Masood Azar; these were airily dismissed by advising India not to let “individual problems obstruct the course of co-operation”. But curiously, Xinhua also suggested that both sides had reached a consensus that “individual problems [Masood Azar] will eventually be solved through strengthening of mutual trust and reduction of unnecessary misunderstandings”. How is this “trust” to be achieved? Will China take the first step to remove these “unnecessary misunderstandings”? This hardly seems likely, given the state of relations that exist between China and Pakistan at present. In the same context, India’s concerns about the China Pakistan Economic Corridor, expressed by the external affairs ministry, were probably met with silence or at best with the homily that the issue of Kashmir be settled between India and Pakistan. So a stalemate on these issues between India and China is very likely to continue.

On the NSG, the Chinese, who are adept at obfuscating issues, denied that they were the prime movers in blocking India’s attempt to gain entry. While loudly proclaiming that India has “wrongly” blamed China for blocking its entry into the group, the Chinese tried to morph Indian public opinion in their favour by stating that the door for entry was “not tightly shut”. However, Wang appears only to have conceded the need for further talks by offering to let the chief Chinese negotiator meet his Indian counterpart. But there is a catch here too. According to Xinhua, “future discussions between India and China can only proceed on the basis of safeguarding an international non-proliferation mechanism”. So will the Chinese lift their objections to India’s entry to the NSG? Again, hardly likely. All the spin about talks is designed to lull opposition till the G20 summit is over –  the successful holding of which is a prime Chinese political requirement, particularly as Chinese President Xi Jinping is personally committed and his prestige is involved.

It seems that during Wang’s visit, the Sino-Indian boundary issue and the need to strengthen border management was also mentioned. The eastern sector of this border is the most important and sensitive, from India’s point of view. Sometimes, it remains inexplicable as to why we do not press the Chinese harder for clarification on the line of actual control (LAC). On November 4, 1962, then Chinese Prime Minister Zhou Enlai wrote an official letter to Nehru and confirmed that “in the east the LAC coincides with the McMahon Line”. Zhou also sarcastically noted that “I believe the Indian government must be having in its possession the original McMahon map”. Quite rightly so, it does. And the Chinese government also has in its possession a copy of the original McMahon map, which they inherited from the Tibetan authorities when they occupied Lhasa. So with both the Indian and the Chinese authorities having in their possession the original McMahon map, it should be easy to read the coordinates and demarcate the LAC.  But the Chinese realise that if they were to do that, they would be confirming the McMahon line and its demarcation.

It is this commitment that the Chinese try to avoid when they avoid the whole process of LAC clarification. We should press them at every forum and not let them resile from their earlier position.

R.S. Kalha is a former secretary, Ministry of External Affairs and a member of the National Human Rights Commission. He can be contacted at rskalha.blogspot.com