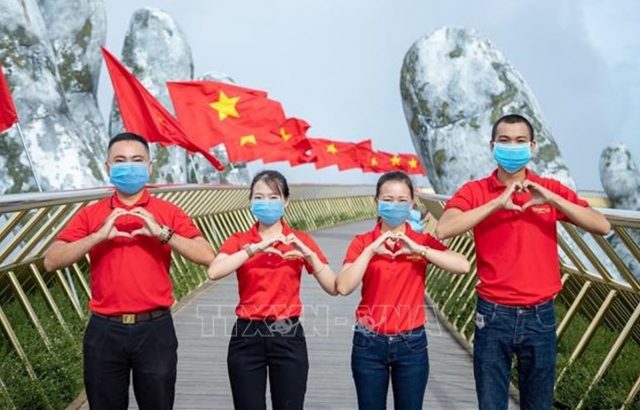 Right in the morning of March 15, Vietjet and the People’s Committee of Tuyen Quang held a conference to introduce and promote tourism in the northern province, and announce the largest- ever international hot air balloon festival in Vietnam slated for this month.

In addition, the carrier has also announced the reopening and increase in the frequency of a series of routes covering Vietnam, especially those to and from Phu Quoc, Nha Trang, Can Tho, and Da Nang right after the resumption of international routes to Japan, the Republic of Korea, Thailand, Singapore, Taiwan (China), Malaysia, India, and Indonesia. This is a strong move of Vietnam’s first low-cost airline, aiming to meet customers’ travel and trading needs in the coming summer.

In fact, from a month before the official full reopening, Vietnam has completely lifted the restrictions on international flights and their frequency. As a result, airlines have immediately implemented various plans to increase frequency and reconnect many flight networks after a 2-year hiatus. Nguyen Quang Trung, head of the Planning and Development Department of Vietnam Airlines, said that on February 15, the national flag carrier restored the operation of routes from Malaysia with a frequency of one flight per week and Hong Kong (China) two flights a week. To prepare for the full reopening of international tourism, the airline has planned to expand and increase the frequency on its entire international regular flight network. In the immediate time, from the end of March, it will increase the total number of flights to 97 a week, linking to airports of most major cities of countries, and reopen its route to Singapore from April 15.

By July, Vietnam Airlines will continue to restore flights to China and Indonesia as well as routes to Da Nang and Nha Trang from major markets such as Japan and the Republic of Korea, thus bringing the total number of international flights to more than 160 per week.

Together with airlines, domestic accommodation and entertainment service providers are also ready to serve tourists with a series of new and attractive products and services.

Big names such as Sun World of Sun Group and Vinpearl of VinGroup have focused on upgrading their facilities and renewing their products to offer visitors with new experiences.

To date, Vinpearl’s facilities, including 36 hotels and resorts with a capacity of over 18,500 rooms, three theme parks and two amusement parks, two safari parks, and four golf courses have come into operation. Notably, the sea turtle-shaped Hai Vuong Palace, one of the world’s largest aquariums, is scheduled to be launched this summer at the VinWonders theme park on Phu Quoc island, while Vinpearl Submarine Nha Trang – the world’s first and only all-glass tourist submarine with a 360-degree infinity view will officially make debut in April.

After nearly three months participating in the pilot programme of welcoming international tourists back, Vinpearl facilities have served over 3,000 visitors from various countries such as the Republic of Korea, Russia, Uzbekistan, Kazakhstan and Laos.