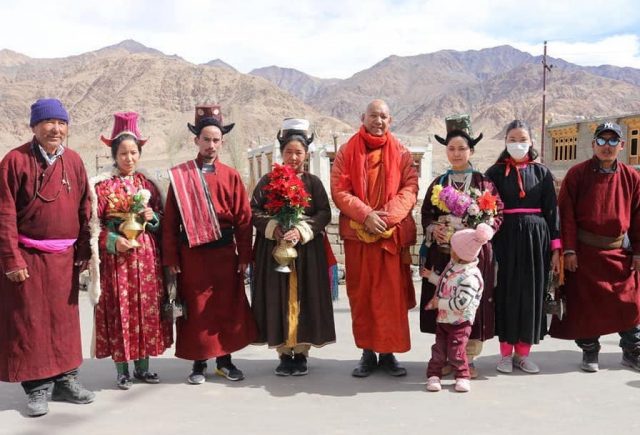 From facebook.com
Venerable Bhikkhu Sanghasena was born in the remote Himalayan region of Ladakh – an ancient state located in the far north west of India, high on the Tibetan plateau. … At the age of seventeen he joined the Indian Army, where he developed a strong sense of personal discipline and responsibility.

In 1986 Venerable Bhikkhu Sanghasena founded the Mahabodhi International Meditation Centre (MIMC) in Ladakh. For the past 25 years Venerable Bhikkhu Sanghasena has tirelessly and selflessly worked to provide high quality education and safe shelter for underprivileged children, first-class healthcare for the sick and needy, empowerment and literacy programmes for women and other socially disadvantaged groups, a caring home for the aged and destitute, and many other humanitarian services.

Over the course of his pilgrimage, Ven. Bhikkhu Sanghasena visited the villages of Gaya, Igoo, Kulum, Lato, Meru, Rong, Rumtse, Sasoma, and Upshi in the northern Indian region, bearing packages of winter essentials such as socks, gloves, woolen hats, blankets, and food staples.

Ven. Bhikkhu Sanghasena is the spiritual director of the non-profit Mahabodhi International Meditation Center (MIMC) in Ladakh. He is also the founder of the Mahakaruna Foundation, the Save the Himalayas Foundation, and a spiritual advisor to the International Network of Engaged Buddhists (INEB).*

“These villages require the attention of the government—the healthcare system, education, and other basic infrastructures are substandard,” Ven. Bhikkhu Sanghasena said in a message shared on social media. “To our surprise, one village doesn’t have even a proper bridge to cross the river, which is a basic necessity for life. The villagers have been crossing with the help of two logs placed over the river as a makeshift bridge, which is very dangerous and risky!” From facebook.comOne of the most popular traditional festivals in India, Dipawali is a celebration of the spiritual victory of light over darkness, good over evil, and knowledge over ignorance. It is observed across the country by Hindus Jains, Sikhs and some Buddhists.

Ven. Bhikkhu Sanghasena pledged to provide oxygen concentrators for the medical centers at Gaya, Igoo, and Upshi. Some especially vulnerable children, including some differently abled, were selected to be admitted to MIMC hostels and school.

The monk also delivered Buddhist discourses at each village, urging the residents to intensify their sadhana spiritual practices and to offer prayers for world peace and an end to the coronavirus pandemic. From facebook.comPerched high on the Tibetan Plateau, Ladakh, which translates as the Land of High Passes, became the largest union territory in India in 2019 after the government reconstituted the former state of Jammu and Kashmir. Spread across some 59,146 mountainous square kilometers, much of which is desiccated and inhospitable, the culture and history of Ladakh is closely interwoven with that of Tibet—so much so that Ladakh is sometimes known as “Little Tibet.”

Ven. Bhikkhu Sanghasena founded the Mahabodhi International Meditation Center (MIMC) in Leh, the joint capital of Ladakh, in 1986. He has since become an exemplar of socially engaged Buddhism, launching numerous projects, events, and initiatives, among them providing educational opportunities and refuge for underprivileged children, empowerment and literacy programs for women and other socially disadvantaged groups, healthcare for the sick and needy, and a care home for the aged and destitute. The MIMC has evolved into an expanding campus that has become a hub for a multitude of socio-cultural and community programs.

Bhikkhu Sanghasena has traveled extensively around the world and participated in many international conferences, seminars and workshops. He urges everyone to promote spiritual and cultural values, literacy, environmental protection, non-violence, inter-religious harmony, peaceful co-existence, global family and world peace. He actively supports the elevation of the status of all women, poverty stricken and underserved people. Furthermore, he also raises his voice against issues concerning the whole world like destructive armaments, destruction of the environment and ecology, human injustice, consumerism, economic imbalance and racism. Bhikkhu Sanghasena strongly proposes and advocates the creation of a global family as last solution to the brutal wars and violence faced by the current world. He is actively working with several other leading national and international organizations, which are committed to the developmental works towards a safer, peaceful and integrated world. Venerable Bhikkhu Sanghasena has distinguished himself as both a charismatic and highly energetic social and spiritual reformer over the years. He has attempted to revitalize and simplify the complexity of ancient philosophy by focusing on relevance of day to day life of young generation. Through his popular slogan- compassion in action, meditation in action, with his captivating smile, he has reached and touched the hearts of thousands and transformed numerous lives across the world.