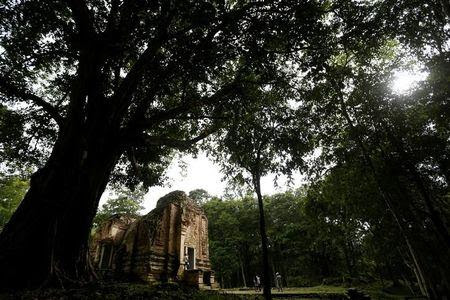 Sambor Prei Kuk is an archaeological site in Cambodia located in Kampong Thom Province, 30 km (19 mi) north of Kampong Thom, the provincial capital, 176 km (109 mi) east of Angkor and 206 km (128 mi) north of Phnom Penh. The now ruined complex dates back to the Pre-Angkorian Chenla Kingdom (late 6th to 9th century), established by king Isanavarman I as central royal sanctuary and capital, known then as Isanapura. In 2017, Sambor Prei Kuk was declared as a UNESCO World Heritage Site

Tourists rushed to Cambodia’s newest world heritage site on the weekend, the 16th and 17th century forest temple of Sambor Prei Kuk after it was recently added to the U.N. cultural organisation’s heritage list.

With its inspiring and tumultuous history, Cambodia attracts tourists from around the world who often make a beeline for the Angkor Wat temple complex, another world heritage site.

On July 8 UNESCO added Sambor Prei Kuk or “temple in the richness of the forest” in the Khmer language to its heritage list. Located 206 km (128 miles) north of the capital Phnom Penh, it is home to numerous temples, 10 of which are octagonal.

UNESCO said Sambor Prei Kuk had been identified as Ishanapura, the capital of the ancient Chenla Empire, a Khmer civilization that flourished in the late 6th and 7th centuries and preceded the Khmer Empire.

It joins the Angkor Archaeological Park and the Preah Vihear temple, located on the Thai-Cambodia border, as world heritage sites.

“Now that it is listed as the world heritage site, I hope that our people will benefit a lot from this and I say many thanks to our ancestors who built this and kept it for us until this generation,” said Sem Norm, a temple guard, adding that he has been taking care of the temples since 1994.

Others hope tourism will help to boost the local economy.

“When we have more tourists then the people here can get more income by selling the souvenirs and our kids can even learn English language easily,” said tourist Uch Srey Leakhena.

Thousands are expected to celebrate the listing of Sambo Prei Kuk as a world heritage site on Monday.

Tourist arrivals in Cambodia rose 5 percent to five million last year. About 5.5 million tourists are expected to visit the country this year.

The official religion at Sambor Prei Kuk city was Shaivism, one of the four most widely followed sects of Hinduism, which reveres the god Shiva as the Supreme Being and the Lingam , Shiva linga representing Shiva to be worshiped in temples.