Simla, is the capital and the largest city of the Indian state of Himachal Pradesh. Shimla is also a district which is bounded by the state of Uttarakhand in the south-east, districts of Mandi and Kullu in the north, Kinnaur in the east, Sirmaur in the south and Solan in the west. In 1864, Shimla was declared as the summer capital of British India, succeeding Murree, northeast of Rawalpindi. After independence, the city became the capital of Punjab and was later made the capital of Himachal Pradesh. It is the principal commercial, cultural and educational centre of the state .

The 4-day extravaganza included a huge participation of people from different religion and cultural background coming together to celebrate the diverse roots by performing colorful folk dances and other musical performances. The Tibetans in and around Shimla also took part in this grand celebration. They performed a number of Tibetan cultural dances including the famous snow lion dance. Also, various art and handicrafts were displayed at the event exhibiting the unique culture and tradition of Tibet.

Tibetans in Shimla headed by the various governmental and non-governmental organisation including the students of Sambhota Tibetan school, Dholanji gathered and participated in the event celebrating the advent of summer. 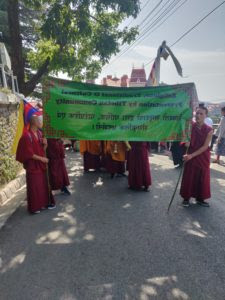