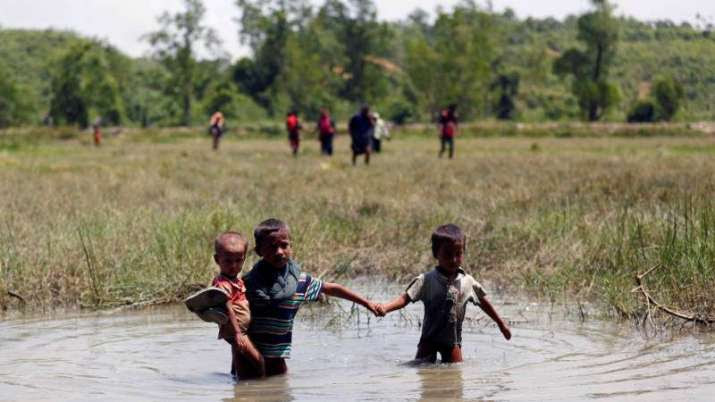 By  Shyamal Sinha
Myanmar has a Buddhist majority. The Muslim minority in Myanmar are the descendants of Muslim immigrants from India (including what is now Bangladesh) and China (the ancestors of Chinese Muslims in Myanmar came from the Yunnan province), as well as descendants of earlier Arabsettlers and the recognized Kamein minority and the Rohingya people, intermarried with local races of Myanmar. According to Human Rights Watch the Burmese government has denied citizenship to any Rohingya persons who cannot prove their ancestors settled in the country before 1823, the beginning of British occupation of what is now Rakhine State (also known as Arakan).

Thousands of Rohingya Muslims and Rakhine Buddhists are fleeing Myanmar’s northern Rakhine State as the country witnesses its worst outbreak of communal violence in five years. Violent clashes between Rohingya insurgents—also known as the Arakan Rohingya Salvation Army (ARSA)—and military forces in the north of the state have reportedly left more than 100 dead, and follow a series of coordinated offensives on police posts and an army base last Friday by insurgents wielding knives, sticks, and homemade bombs. In October last year, similar offensives by insurgents led to a harsh military response, in which observers alledge widespread human rights violations of Rohingya Muslims.

Religious tensions between Buddhists and Muslims have simmered in Myanmar for almost half a century. Myanmar’s government classifies Rohingya Muslims as stateless foreign migrants even though they have lived in Myanmar for generations. According to the Washington, DC-based Pew Research Center, Buddhists make up about 80 per cent of Myanmar’s population of some 52 million, and Muslims just 4 per cent. The country’s population also includes Muslims from other ethnic groups. Rakhine State—where Rohingya Muslims make up the majority in the north and Buddhists represent the majority in the south—has been the epicenter of the unrest. Outbreaks of anti-Muslim violence in 2012 left 140,000 people, predominantly Rohingya, displaced. Most Rohingya remain in squalid resettlement camps where they are subject to severe restrictions, with limited access to education, healthcare, or employment opportunities.

The renewed violence follows days after the Advisory Commission on Rakhine State, formed by State Counsellor Aung San Suu Kyi and led by former UN secretary-general Kofi Annan, presented its final report. The report calls for socio-economic development of the state, which remains one of the poorest in the nation, a clear path to citizenship for the Rohingya minority, and a “calibrated”approach to security, where the security forces are diversified to include women and ethnic minorities, and schooled in human rights.

“Unless concerted action led by the government and aided by all sectors of the government and society is taken soon, we risk the return of another cycle of violence and radicalization, which will further deepen the chronic poverty that afflicts Rakhine state,” Annan said at a news conference on Friday.  (Associated Press)

On Sunday, the violence reached a new peak as many houses in Rohingya hamlets were torched. Villagers have alleged that the army was behind the attacks, while military sources say the fires were lit by insurgents while soldiers combed the area in search of landmines. Amid the violence, the government has called on Rohingya civilians to cooperate with army personnel, offering assuriances that they will not be affected. However, thousands of Rohingya, mainly women and children, have fled their homes in the hope of seeking refuge in neighboring Bangladesh.

Bangladesh has announced that it has closed its borders and that it will not allow refugees to enter the country. Bangladeshi police have even warned Rohingya already living in Bangladesh to not aid those approaching the border: “They told us, ‘If anyone gives them shelter, we will arrest you and send you to the other side.’ So, out of fear, we are not allowing any newcomers,” said Mohammad Yunus, a Rohingya Muslim  living in an improvised refugee camp near the border. (Asian Correspondent) Nonetheless, some 5,000 people are estimated to have already crossed the border into Bangladesh the recent days.

Meanwhile, thousands of non-Muslim villagers have been evacuated by the government to nearby Buddhist monasteries, towns, and police stations.

The UN and other international organizations have withdrawn staff from the area after the government announced that it would investigate alleged ties between NGO staff and a reported attack on a village by Rohingya insurgents in August. The police and military have pledged to continue to protect aid workers, but “with this kind of situation, no one can fully guarantee safety,” said Rakhine State chief minister Nyi Pu. (Reuters)

The surge of violence in the region adds to pressure on Aung San Suu Kyi, who has been criticized for not taking a clear stance on the Rohingya situation, as she faces yet another incident that might further damage an already wounded society. As Myanmar’s first democratically elected leader, the Nobel Peace Prize laureate, a devout Theravada Buddhist, is in charge of healing a nation carrying the burden of decades of military rule and associated persecution, with a military still suspicious of ethnic minorities, international intervention, and even democracy, and other groups such as the Committee for the Protection of Nationality and Religion (Ma Ba Tha), a collective of radical Buddhist abbots and influential monks promoting a hardline Buddhist nationalism and calling for an all-out ethnic cleanse.

Reflecting the division in the country, Aung San Suu Kyi has to negotiate a fine line between Western expectations and domestic realities. Pope Francis, who condemmed “the persecution of our Rohingya brothers” during prayers on Sunday and met with Aung San Suu Kyi at the Vatican in May, has announced that he will visit Myanmar in November. (Vatican Insider)

On 8 February 2017, Pope Francis officially condemned the Myanmar government’s treatment of Rohingya Muslims and urged the country’s Muslims to “live up to their faith.”