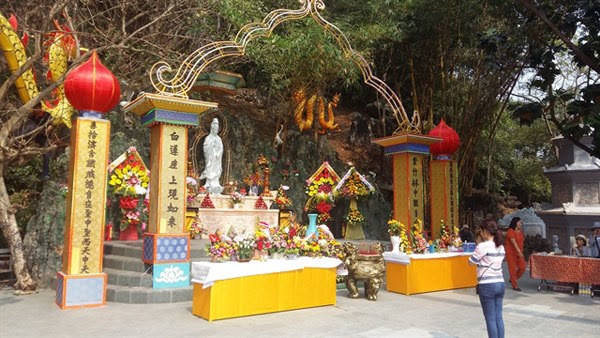 A visitor prays at a pagoda in Ngu Hanh Son (Marble Mountains) in Da Nang. The annual Quan The Am (Avalokitesvara Bodhisattva) Festival was regconised as the National Intangible Heritage by the ministry of Culture, Sports and Tourism. (Photo: VNA)

The Quan The Am (Goddess of Mercy) festival at Ngu Hanh Son (Marble Mountain) in the central city of Da Nang has been recognised as a national intangible cultural heritage. The festival is held annually on the 19th day of the second lunar month at Quan The Am Pagoda and other venues at the Ngu Hanh Son national special relic site. It is one of the largest festivals nationwide and aimed at preserving and promoting ethnic culture and traditional values. The recognition brings the number of national intangible culture heritages in Da Nang to six, including the stone engraving products of Non Nuoc stone carving village and the Cau Ngu (whale worshipping) festival.

The Ministry of Culture, Sports and Tourism has recognised the annual Quan The Am (Avalokitesvara Bodhisattva) Festival in the central city of Da Nang’s Ngu Hanh Son district as National Intangible Heritage.

The city’s Department of Sports and Culture said the main festival, which falls on the 19th day of the second lunar month, features the procession of an image of Avalokitesvara Bodhisattva, and a prayer for a year of peace, prosperity and happiness for the nation, drawing at least 10,000 attendees.

The festival is often held at the Quan The Am Pagoda at the foot of the Kim Son Mountain – the largest of the Ngu Hanh Son (Marble Mountains) in Da Nang.

The stone sculptures art of the 400-year-old Non Nuoc stone village in the Marble Mountains was also recognised as National Intangible Heritage in 2014.

The Marble Mountains landscape site was named a National Special Relic in 2018.