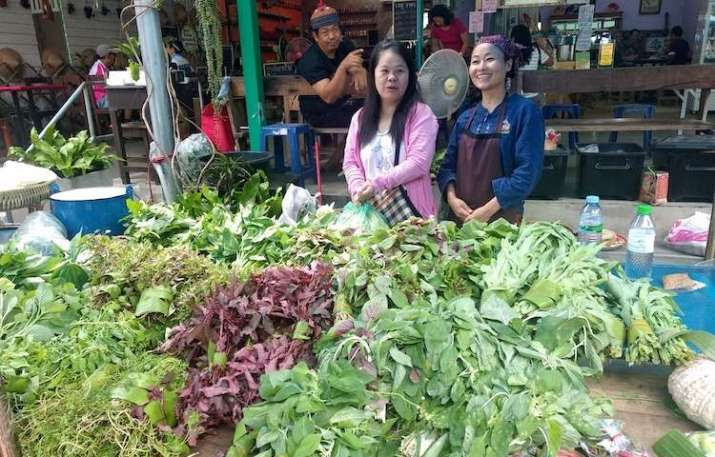 A Santi Asoke weekend farmer’s market. From indepthnews.net
Buddhism encompasses a variety of traditions, beliefs and spiritual practices largely based on original teachings attributed to the Buddha and resulting interpreted philosophies, it originated in ancient India as a Sramana tradition sometime between the 6th and 4th centuries BCE, spreading through much of Asia.

Santi Asoke (meaning “Peaceful Asoka”), one of Thailand’s new Buddhist movements, has grown into a number of self-sustaining communities in the country. The community operates a number of small social welfare projects in addition to their monasteries in Thailand. These include second-hand stores, farmer’s markets, an Indian restaurant that offers free meals to those in need, and a number of other businesses.

Described as “egalitarian” and “democratic” by British scholar Peter Harvey, Santi Asoke was founded by Phra Bodhirak in 1975 after he left the national Ecclesiastical Council (Sangha) of Thailand. (Harvey 2015, 392) His mission, and that of the organization, has been to revive the forest monk ideal of simple living and sufficiency. It is often contrasted with the second large new Buddhist community in Thailand, Dhammakaya, which is known for organizing large-scale celebrations and co-ordinated meditation gatherings.

Both Santi Asoke and Dhammakaya have presented alternative models of Theravada Buddhism and both have faced controversy. In 1989, Bodhirak was excommunicated from the mainstream monastic sangha, in part for declaring himself a once-returner (Pali: Sakadagami; a partially enlightened person). Bodhirak remained active as a monk and the order he founded, Santi Asoke, has gained popularity over the years. When a Santi Asoke member, Major-General Chamlong Srimuang, set out to clean up corruption in Thai politics after his election in 1985 as governor of Bangkok, the organization was hit with further difficulties.

“In order to prevent Chamlong from taking to the national stage in politics, his Buddhist affiliations needed to be declared illegal,” explained Prof. Marja-Leena Heikkila-Horn, a Finnish scholar of comparative religion teaching at Thailand’s Mahidol University. “Bodhirak was detained in June 1989 and all the Asoke monks and nuns were detained for one night in August 1989. A court case was filed against them that year; it lasted until 1996.” (In Depth News)

Maintaining consistent criticism of Thai society, and that of the world beyond, Santi Asoke again grew in popularity after the 1997 Asian financial crisis, which began in Thailand and saw its currency, the baht, lose more than half of its value. In 1998, in response to the crisis, the late Thai king Bhumibol Adulyadej advised Thais to follow a “sufficiency economics” model of simple self-sufficiency. This model reflected the one that Santi Asoke members had been living by for years.

Today the Santi Asoke second-hand store on the northeastern outskirts of Bangkok is filled with items donated by members, with proceeds going toward the organization’s modest television station. The sales raise about Bt800,000–600,000 (US$19,000–26,000) each month. Volunteers sort clothes at the second hand store. From indepthnews.net

“People donate whatever they don’t need. We have no set price. They will come and collect the pieces they want to buy, like in wholesale, and we quote a price,” said community leader Samdin Lersbusway. “The shop sells everything from clothes to air conditioners. Things that cannot be sold directly, we repair and sell. We also recycle paper, plastics, and sell to recyclers. Anyone can donate stuff to us. Sometimes we get new goods from the rich.” (In Depth News)

Santi Asoke maintains a printing press, radio stations, as well as schools, which cover normal subjects but also teach collaborative working, art, music and Buddhist ethics. It also runs camps for children and young adults where they learn self-discipline and helpfulness, along with a deeper understanding of ecology, natural farming, and Buddhism. (Harvey 2015, 392)

“The Santi Ashoke communities are self-sustained Buddhist communities. Monks and people live according to the teachings of [the] Buddha and they have developed a system of sustainable living,” said Thai television producer Pipope Panitchpakdi. “It is something good for today’s world facing climate change and political divisions, etc.” (In Depth News)

Today, Santi Asoke has around 10,000 members, a small number in a country of 69 million people, where 94.5 per cent of the nation identifies as Buddhists, according to government census data from 2015.

Interestingly, they don’t have the large Buddha statues and lavish shrine rooms Thai temples normally have. “Our community has 3 sections – temple, school and community. All 3 are integrated,” says Prouputt Kaodura, English interpreter for the community.

“We don’t worship Buddha the way others do. Buddha statues remind us of his teachings. It’s not true that we don’t respect Buddha,” she adds.  Chipping in Samdin says, “Buddha statues means 3 things to us – about worldly things, being knower of the world, having compassion”.

Second Day of His Holiness the Dalai Lama’s Dialogue with USIP...