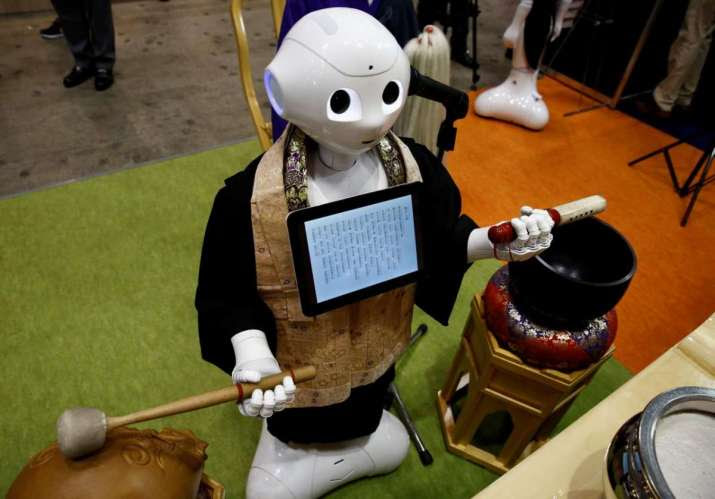 By  Shyamal Sinha
In an unexpected synthesis of ancient and modern, a Buddhist temple on the edge of Beijing has developed a robot monk who can chant mantras and and explain basic tenets of faith.

Master Xianfian, a (human) monk at Longquan and Xian’er’s creator, said artificial intelligence could be harnessed to spread Buddhist wisdom in China.“Science and Buddhism are not opposing nor contradicting, and can be combined and mutually compatible,”

Buddhism filled a gap in a fast-paced, hi-tech existence, he added. “Buddhism is something that attaches much importance to inner heart, and pays attention to the individual’s spiritual world … I think it can satisfy the needs of many people.”

Amid ongoing rapid advances in digital technology, robots have come to play a significant role in human society. In Japan, one of the most technologically advanced countries in the world, robots are becoming an increasingly commonplace part of urban life. The Japan Times reports that SoftBank Group subsidiary SoftBank Robotics has already produced robots that can work in restaurants, nursing homes, and banks, and its automatons are now being deployed in temples to chant sutras during funeral services.

Conducting funerals in Japan can be a costly undertaking and, combined with the expense of buying a burial plot, it can turn into a big-budget obligation. Kanagawa Prefecture-based plastics company Nissei Eco has programmed SoftBank’s 1.2-meter robot Pepper—described as the world’s first robot able to read human emotions—to recite sutras at funeral ceremonies.

Nissei Eco says its initiative is a part of a broader plan to use innovation to adapt the industry to changing times. Targeting secular-minded customers looking for cheaper alternatives, the company believes robotic priests could bring down the cost of traditional funerals. Pepper, the first robot monk in Japan, will also be featured in the “Life Ending Industry Expo” at the end of this month in Tokyo. (The Japan Times)

Similarly, in China, a robot monk named Xian’er is serving the public at a monastery in Beijing. According to Ecns.com, the yellow-robed robot, created in 2015, now speaks English as well as Chinese. Stationed at Longquan Monastery, Xian’er is able to converse with temple-goers in simple English, however it is not yet capable of answering complex problems. When difficult questions are asked, it reportedly responds by saying it is “just a small monk.” Unable to answer questions about Buddhism in English, the robot monk replies, “I need to ask my master,” just like a real novice monk might do. (Ecns.com)

Much like his newer counterpart in Japan, Xian’er, is able to recite Buddhist sutras. The electronic monk’s purpose is to reach out to people who are constantly connected through devices such as smartphones and tablets. Venerable Xianfan, a Buddhist monk and the creator of Xian’er, stated that artificial intelligence could be used to help spread the teachings of the Buddha in China. “Science and Buddhism are not opposing nor contradicting, and can be combined and mutually compatible,” he said. “Buddhism is something that attaches much importance to inner heart, and pays attention to the individual’s spiritual world . . . I think it can satisfy the needs of many people.” (The Guardian)

According to The New York Times, Xian’er has been met with a mixed response. Temple visitor Zhang Ping expressed doubts that the little robot could deal with deeper human issues, while Wang Yiren, a volunteer at the temple, agreed, observing: “I don’t think it’s possible for the intelligence of a robot to be advanced enough to understand human feelings.” Meanwhile, another visitor at the temple noted, “If you have no one to talk to, maybe it would help to talk to a robot.”. (The New York Times)

Venerable Xuecheng, the chief monk of Longquan Monastery and president of the Buddhist Association of China, said Chinese Buddhists should learn to accept change and the social obligation of reviving Buddhism with modern means of communication. The senior monk, who is also a digital communications enthusiast, added: “Buddhists should not only seek enlightenment through daily learning, meditation and cultivation to gain positive energy from Buddhist Doctrine. They should also contribute more to society by transforming their own gains, kindness, compassion, and wisdom, to more others [sic] through the Internet and new media.” (CCTV)