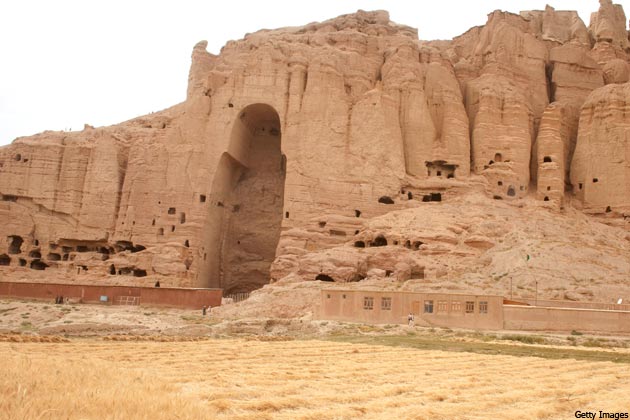 Indian Home Minister Rajnath Singh promised to build a Buddha statue taller than the ones in Bamiyan in Afghanistan which were blown up by the Taliban, if BJP came to power in Uttar Pradesh in next year’s polls.

Flagging off a ‘Dhamma Chetana Yatra’ in Varanasi in Sarnath organised by All India Bhikkhu Sangha to mark the 125th birth anniversary of BR Ambedkar, Mr Singh said he had made an announcement in this regard in 2001 when the Bamiyan statues were destroyed by Taliban forces.

“If BJP forms government in Uttar Pradesh, then we will construct a huge Buddha statue in UP, even bigger than Afghanistan’s giant Bamiyan Buddhas which were destroyed by terrorists,” he said at a religious gathering in Mulagandhakuti Vihara in Varanasi.

“When terrorists destroyed the Bamiyan Buddhas, I was the Chief Minister and BJP was in power in the state. I was deeply hurt and announced constructing statue of Budhha even bigger than the Bamiyan statues.

Even the foundation stone was laid at Kushinagar, but unfortunately our government wasousted from power and the project was put on backburner. No successive stategovernment took interest in building the statue, he said.

The Dhamma Chetna Yatra, aimed at spreading Buddha’s message of ‘peace’, began today. It will tour various places and conclude in Lucknow on October 14.

Drawing a parallel between Sardar Patel and BR Ambedkar, the Union home minister said Sardar Patel helped in integrating princely states to make a united India, whereas Dr Ambedkar was instrumental in binding the country by drafting the Constitution.