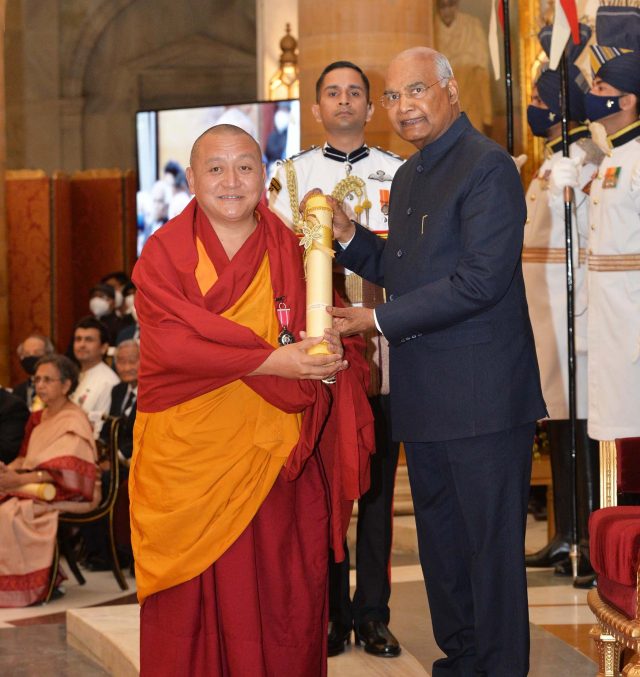 President of India, Ram Nath Kovind, Monday presented Padma Shri Award to Guru Tulku Rinpoche for Spiritualism. He is the 12th Abbot of Thubchog Gatsel Ling Monastery in Bomdila. A Buddhist monk, he is identified as the 12th incarnation in the lineage of Merag Lama Lodroe Gyatso who founded Tawang Monastery.

Guru Tulku Rinpoche received the prestigious award under the ‘spiritualism’ category along with Sadguru Brahmeshanand Acharya Swami from Goa.

Buddhist Monk Guru Tulku Rinpoche was born to Yab Lobsang Tshering and Yum Pema Choden on October 19, 1968 at Khamkharong in West Kameng district of Arunachal Pradesh. It’s believed that he was recognized as the reincarnation of Late Thupten Kelden Rinpoche at the age of five by the 14th Dalai Lama.

Guru Tulku Rinpoche’s traditional hair cutting was performed by the Dalai Lama when he was seven years old during his Kalachakra teaching and was named Tenzin Kelden. He was ordained as a novice monk or getshul two years later, when he was nine and as a monk or gelong when he was twenty.

Guru Tulku Rinpoche started serving at the office of the Dalai Lama from 1998 and continued there for ten years till 2008, when he was appointed as Abbot of the Tawang monastery. He stepped down from the position in 2016.