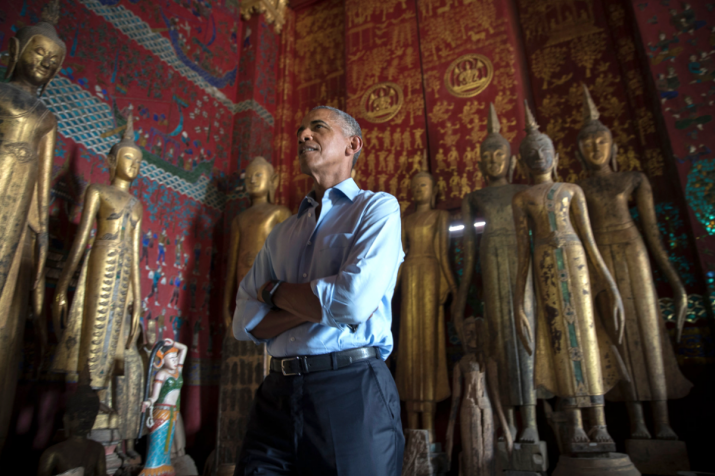 US president Obama toured the Buddhist monastery complex of Wat Xieng Thong during a visit to Luang Prabang on Wednesday. From nytimes.com
Laos is a small nation next to larger neighbors and, as a result, too often, the richness of your culture has not been fully appreciated.  And that’s why, as part of my visit, I’m grateful for the opportunity to know Laos better, and to help share your story with the world.

Barack Obama’s historic and widely publicized visit to Laos—the first by an incumbent US president—included a tour of the ancient northern city of Luang Prabang  where Obama stopped off at a centuries-old Buddhist Temple and posed for a photo with a group of monks.

A professed Protestant Christian, Obama has had more than a few brushes with Buddhism during his two terms in office, meeting His Holiness the Dalai Lama on two separate occasions, as well as Buddhist nun, teacher, and author Pema Chödrön. He has also made several references to Buddhism and Buddhist teachings during public appearances.

The US president and his entourage conducted a brief tour of Luang Prabang  which encompasses the UNESCO Town Of Luang Prabang World Heritage Site on the banks of the Mekong River. Luang Prabang was a regional center for Buddhism when the city was the capital of the ancient kingdom of Lan Xang from 1354–1560 and is renowned for its numerous centuries-old Buddhist monuments and monasteries.

Obama’s first stop in the historic town was the ornate 16th century Wat Xieng Thong temple complex, sometimes known as the “Temple of the Golden City.” Respecting traditional custom, the US president removed his shoes before entering the complex’s carriage house, where he was shown a row of golden sculptures. Outside, he took a short moment to pose for a photo with 21 assembled novice monks in saffron robes. 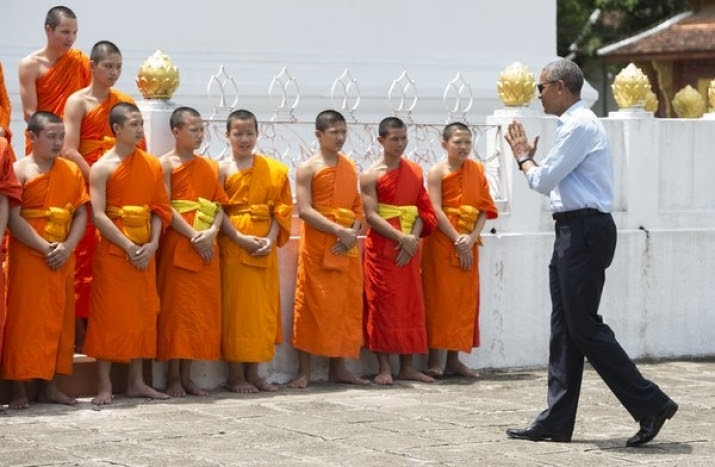 Obama greets a group of novice monks outside Wat Xieng Thong. From huffingtonpost.com

In a formal speech to the people of Laos a day earlier, during which he touched upon various aspects of the checkered relationship between Laos and the US, Obama paid tribute to Buddhism and traditional Lao culture. “In countless stupas and in your daily lives, we see the strength that draws so many of you from your Buddhist faith,” he observed. “A faith that tells you [that] you have a moral duty to each other to live with kindness and honesty, and that we can help end suffering if we embrace the right mindset and the right actions. And in literature, like the epic of [Sang] Sinxay,* we see the values that define the people of Laos, such as modesty and compassion, and resilience and hope.” (YouTube)

Obama also broached the sensitive subject of the US military activity in the country in the 1970s, during its war with Vietnam, when the US secretly dropped more than 2 million tons of bombs on Laos, making it the most heavily bombed country on a per-capita basis in history. The US president pledged to double the amount of aid provided to to Laos for the removal of unexploded ordnance, committing US$90 million over a three-year period.

Obama’s visit to Laos is part of a US initiative to seek closer economic ties with Southeast Asia at series of meetings this week following the Group of 20 summit in Hangzhou, China, on 4–5 September. Obama is one of several world leaders arriving for a conference of the Association of Southeast Asian Nations (ASEAN) in Laos, which is taking its turn to chair the regional forum.

The Lao People’s Democratic Republic is a predominantly Buddhist nation, with about 66 per cent of the population identifying as Theravada Buddhists, according to 2010 data from the Washington, DC-based Pew Research Center. Laotian folk religions account for the bulk of the remainder. There are an estimated 5,000 Buddhist temples in this country of 7.2 million people and some 22,000 monks, including roughly 9,000 senior monks who have engaged in several years of monastic study. Most Buddhist men in Laos spend part of their lives at a monastery as a monk, even if only for a few days.

Americans and the peoples of the Asia Pacific will be able to say to each other, as the song goes, “we will always have you as our true friend as long as we live.”  Khop jai lai lai.