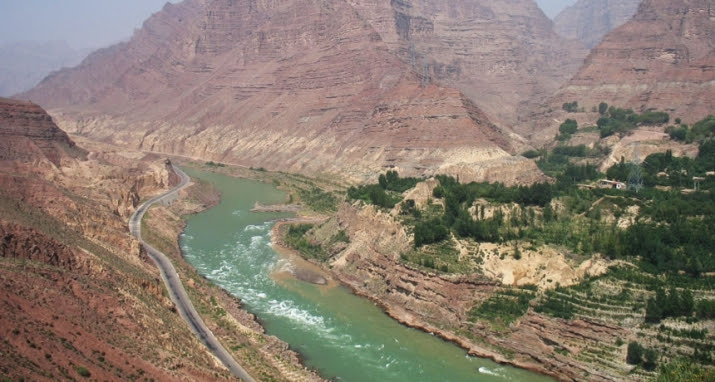 The Yellow River cuts through Jishi Gorge, close to where researchers say a natural dam burst and flooded the area in about 1920 BCE. From sciencenews.org
Yu the Great (Chinese: 大禹; pinyin: Dà Yǔ, c. 2200 – 2100 BC)[1] was a legendary ruler in ancient China famed for his introduction of flood control, inaugurating dynastic rule in China by founding the Xia Dynasty, and for his upright moral character.

According to legend, Chinese civilization began in the Yellow River Basin some 4,000 years ago as the result of the Great Flood of Gun-Yu, a catastrophic deluge that lasted for generations and laid the foundations for what would become China’s first dynasty, the Xia. However, a recently published study in the journal Science suggests that this ancient tale may be more than mere mythology, with geological and archaeological evidence suggesting that a devastating flood did indeed take place.

Ancient Chinese texts record a mix of historical accounts and legends of the Great Flood of Gun-Yu sweeping away homes and inundating farmland on a cataclysmic scale. The devastation was finally overcome by Emperor Yu the Great, who initiated a huge civil engineering project to dredge canals over the course of decades that eventually drained the floodwaters, earning him the “heavenly mandate” to rule over China and establish the Xia dynasty, considered the beginning of Chinese civilization.

The newly published study, co-authored by geologist Dr. Wu Qinglong of China’s Nanjing Normal University, suggests that a massive earthquake triggered a landslide that blocked the Yellow River at Jishi Gorge in what is now Qinghai Province. This natural dam caused river water to accumulate in a new lake for some six to nine months before the waters eventually overflowed and broke through the barrier in about 1920 BCE. A devastating deluge of some 16 cubic kilometers of water ensued that the authors rank as one of the largest freshwater floods of the last 10,000 years. Although the research suggests these events occurred several centuries later than the Great Flood of Gun-Yu is traditionally believed to have taken place they are confident that the events could account for the ancient legend.

According to the research conducted by a team of geologists and archaeologists led by Dr. Wu, the evidence for this theory comes from sediment left by the dammed lake on the sides of Jishi Gorge, and discovered by Dr. Wu during fieldwork in 2007. “[The deposits] inspired us to connect the next possible outburst flood with the abandonment of the prehistoric Lajia site 25km downstream,” Dr. Wu explained. “But at that time we had no idea what the evidence of a catastrophic outburst flood should be.” (BBC)

The site at Lajia, sometimes known as China’s Pompeii, contains numerous cave dwellings, the remains of their inhabitants, and a wealth of cultural artifacts that were buried by a major earthquake and preserved beneath a thick layer of mud.

“In July 2008 I suddenly realized that the so-called black sand previously revealed by archaeologists at the Lajia site could be, in fact, the deposits from our outburst flood,” said Wu. “The subsequent investigation confirmed this speculation and showed that the sediments from this outburst flood are up to 20m thick, and up to 50m higher than the Yellow River—indicating an unprecedented, devastating flood.” (BBC) Remains of some of the former inhabitants of the prehistoric Lajia archaeological site. From iflscience.com

The sequence of events suggested by the evidence “provides us with a tantalizing hint that the Xia dynasty might really have existed,” said David Cohen, co-author of the research and an archaeologist at National Taiwan University. “If the great flood really happened, then perhaps it is also likely that the Xia dynasty really existed too. The two are directly tied to each other,” said Dr. David Cohen of National Taiwan University, a co-author of the study. (Science, National Geographic)

“We have the geological evidence of just a huge outburst flood, which is incredible in itself,” Dr. Cohen observed. “But then there’s this coincidence of it co-occurring with the destruction of the Lajia site—which is able to give us very, very precise dates . . . and then that this flood was of such a scale and corresponds in time, and along the Yellow River, with both the beginnings of Bronze Age civilization and the legend of the great flood itself. It’s just this amazing story. All these different approaches coming together—it is just great luck.” (BBC) Yu is one of the few Chinese rulers posthumously honored with the epithet “the Great“. The Yellow River is the third-longest river in Asia and the sixth-longest in the world. From wikipedia.org
Share this...