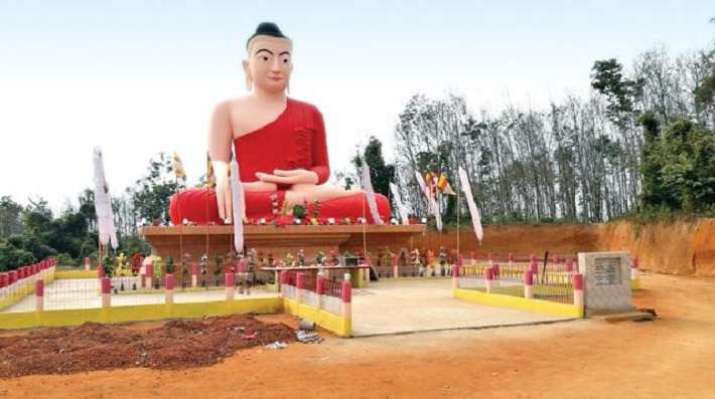 By  Shyamal Sinha
Chittagong Hill Tracts (CHT) the only extensive hill area in Bangladesh lies in southeastern part of the country (21°25’N to bordering Myanmar on the southeast, the Indian state of tripura on the north, Mizoram on the east and chittagong district on the west..

A new 45-foot statue of the Buddha erected in Bangladesh’s Chittagong Hill Tracts on the premises of Tainkhalipara Sanghamitva Seva Sangha Vihar (TSSSV) has become a symbol of communal unity in a region too often affected by conflict and unrest.

The statue was the intiative of Venerable U. Waisudha Mahathera, abbot of the TSSSV, and funded by donations. Paimang Marma, a regular visitor to the TSSSV, explained that the statue took two years to biuld, with the help of an architect from Myanmar. Construction costs totaled 3.5 million taka (US$42,000), with donations coming from Buddhist, Christian, Hindu, and Muslim communities, as well as local government representatives, and with politicians providing cooperation in the building process in various ways.

The TSSSV, located some 20 kilometres from Bandarban Township, was established in Bandarban District 18 years ago and also contains a school and a meditation center.
Niladhan Tanchyanga, a follower of Ven. Waisudha, remarked that even people of other  religions followed and respected Ven. Waisudha, which is why they were willing to contribute to the construction of the statue. Their donations also helped to support the TSSSV, including the school.
The construction of the statue, which was completed in late November last year, faced numerous setbacks. When the Ajalcuga Forest Temple in the neighbouring Rangamati District wanted to build a 10-foot Buddha statue in 2014, there was strong opposition from the local authorities. The district administration even went so far as to impose 144 prohibitive rules affecting Buddhists in the region,asserting that areas in protected forests were out of bounds for building any kind of settlement. Yet they also sought to deprive Buddhists communities and other indigenous organizations in theChittagong Hill Tracts of their right to build religious structures on their own land.

According to Ven. Waisudha, the 45-foot tall Buddha statue is the biggest seated Buddha statue (Buddha in meditation) in the country, although Bangladesh does have two other large Buddha statues: a 100-foot image of a reclining Buddha at Ramu in Cox’s Bazar District, and a standing Buddha in Khagrachari District of the Chittagong Hill Tracts.

Ven. Jinabodhi Bhikkhu, professor of Pali at Chittagong University, noted that statues of the Buddha in meditation have significant value in Buddhist culture, and that building the statue would bring great honor to Bangladesh. He expressed his hope that the image would attract many tourists, both from Bangladesh and overseas, who would travel to the Chittagong Hill Tracts to visit the statue. (Prothom Alo)

In the last few years, Bangladesh has witnessed several  arson attacks on Buddhist religious buildings and ancient monasteries, examples of a trend of increased aggression and violence against Buddhists and other minorities in the country. The Buddha statue at TSSSV, having been funded by donors from various religions and ethnic groups, has become a symbol of cooperation and harmony for the country.

India, China to Hold 12th Round of Talks Tomorrow

India, China to Hold 12th Round of Talks Tomorrow