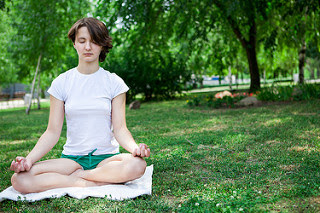 Buddhist meditation is the practice of meditation in Buddhism. The closest words for meditation in the classical languages of Buddhism are bhāvanā (“mental development”) and jhāna/dhyāna (mental training resulting in a calm and luminous mind).

Buddhists pursue meditation as part of the path toward liberation, awakening and Nirvana,and includes a variety of meditation techniques, most notably asubha bhavana (“reflections on repulsiveness”); reflection on pratityasamutpada(dependent origination); sati (mindfulness) and anussati (recollections), including anapanasati (breath meditation); dhyana(developing an alert and luminous mind) and the Brahma-viharas (loving-kindness and compassion). These techniques aim to develop equanimity and sati (mindfulness); samadhi (concentration) c.q. samatha (tranquility) and vipassanā(insight); and are also said to lead to abhijñā (supramundane powers). These meditation techniques are preceded by and combined with practices which aid this development, such as moral restraint and right effort to develop wholesome states of mind.

Every now and then, we are reading or being told that meditation is a good thing and all of us need to practice it. But once we think of meditation, two questions arise—-

1) What exactly is meditation and how does one do it ?

2) What is the purpose of meditation ?

Meditation is a part and parcel of many religions of the world, especially Buddhism and Hinduism and has been around for thousands of years. And yet, there is so much confusion on what it is, how to do it, and why to do it.

As far as the why is concerned, there are many reasons, from religious to health to self-actualisation and self-discovery, to seeking God. But commonly, nowadays, meditation is often being suggested on health grounds, to people who are stressed out, and who have deveopled stress induced diseases like acidity, migraine, high blood pressure, diabetes, anxiety, obesity etc. While the religious aspects of meditation—connecting to God, connecting to universal consciousness, uniting the individual consciousness to the universal consciousness, God realisation etc are true and need to be pursued by those who are seeking those things, we shall focus more on the health aspect of meditation.

Scientific research has established that those who meditate on a regular basis have a more healthy life, have better eating and sleeping habits, are less stressed, and have more enthusiasm, joy , energy and zest for life. Many of the lifestyle diseases like high blood pressure, ulcers, hyperacidity, irritable bowel syndrome, fibromyalgia, anxiety, insomnia etc have all shown good responses to meditation. How and why does this happen? Although not clear, it appears that meditation calms certain “hyper”areas of the brain, and brings about an inner poise, stillness and balance. It changes many brain wave patterns, and these in turn run down into the body, reflecting as better eating, sleeping, and energy levels and mood.

So, what is meditaiton and how does one do it? There are thousands and thousands of kinds of meditations, and it is easy to find them on the Internet and in religious texts and among various religious or spiritual groups. In its simplest form, meditation is trying to calm the mind by creating a mind without thoughts, to create a clear mind, even if only for a few seconds or minutes. As humans, we are always thinking and filled with thoughts, and on an average, we are apparently thinking about 60000 thoughts a day, many of them similar to what we thought yesterday, the day before, last week, last month or five years ago. The thinking process, it appears never sleeps, even when we do.

Now, attached to each thought, is an emotion. And if we are constantly thinking, we are also constantly feeling. Some of the emotions are good ones, but many are negative ones which make us uncomfortable and restless. And to get away from this discomfort or restlessness, we distract ourselves often with food, drinks, smoking, drugs, social media, or sex. If we did not have so many thoughts and associated negative emotions, we might not need half our distractions. Hence, in the simplest terms, meditation is a practice for creating a mindless state, so that, when you are not doing meditation, and when the thoughts come, you know somewhat how not to attach to them, how not to get hooked by them, how to let go of them and therefore to avoid the negative emotions associated with them.

In its simplest form, meditation involves sitting quietly in a calm peaceful quiet place, and closing out eyes and observing our thoughts. Nothing else. And as we do that, more and more thoughts will come. One thought might say “Did I put off the gas? Another one will say “I have to pay the electricity bill tomorrow”. Yet another will say “Wonder what I am going to give my mom for her birthday next week? and another one might be “Why did he/she react so badly to my opinions yesterday? or “Hope my boss is in a good mood, so that I can ask him for leave tomorrow”..and so on and so forth. And each of these thoughts trigger an emotion (mostly negative) and these negative emotions through our nervous system and endocrine system, bring about symptoms in the body, in the form of stomach pain, or chest tightness, or headache or palpitation or restlessness.

Once we observe our thoughts and consciously try not to attach to them and follow up on them, the thought will become weaker and weaker, and eventually go. But it will soon be replaced by another one. And another one…endlessly. As we keep observing, and as we stop giving energy to those thoughts, they start to become weaker, and appear less frequently, till slowly we start seeing gaps between the thoughts. Once we make meditation a daily practice, the ability to not attach and follow a thought, to let go of it as soon as it appears, can be translated into our waking periods. If you get upset, or angry, or someone says something, or you see something on television, if you are aware, because you have been practising meditation, you can see those things impersonally, and not let the thought become a train of thoughts, and can prevent it from triggering negative emotions, restlessness, anxiety, and eventually disease.

So, while meditation has many definitons, and there are many kinds of meditation, the simplest and easiest way is to observe your thoughts without attachment. These few minutes of meditaiton that you do daily, is the gymnasium where you learn and train yourself in this art, so that you can start using it in your normal daily routine. thus leading to a reduction in your thoughts–emotions–anxiety/ fear/ restlessness triggered cycles and patterns and an increase in your calmness, joy, peace and good health.

Although mindfulness meditation has received the most research attention, loving kindness (metta) and equanimity (upekkha) meditation are beginning to be used in a wide array of research in the fields of psychology and neuroscience.