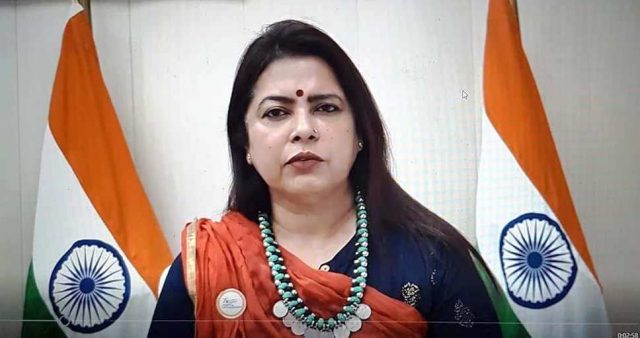 Meenakshi Lekhi, Minister of State for External Affairs and Culture. Image courtesy of Upender RaoThe international conference “The Spread of Buddhist Thought” was held online from 27–28 October, with a focus on reflections of Indian Buddhist thought throughout the world.

Buddhism, founded in the late 6th century B.C.E. by Siddhartha Gautama (the “Buddha”), is an important religion in most of the countries of Asia. Buddhism has assumed many different forms, but in each case there has been an attempt to draw from the life experiences of the Buddha, his teachings, and the “spirit” or “essence” of histeachings (called dhamma or dharma) as models for the religious life. However, not until the writing of the Buddha Charita (life of the Buddha) by Ashvaghosa in the 1st or 2nd century C.E. do we have acomprehensive account of his life. The Buddha was born (ca. 563 B.C.E.) in a place called Lumbini near the Himalayan foothills, and he began teaching around Benares (at Sarnath). His erain general was one of spiritual, intellectual, and social ferment. This was the age when the Hindu ideal of renunciation of family and socia llife by holy persons seeking Truth first became widespread, and when the Upanishads were written. Both can be seen as moves away from the centrality of the Vedic fire sacrifice.

Siddhartha Gautama was the warrior son of a king and queen. According to legend, at his birth a soothsayer predicted that he might become a renouncer (withdrawing from the temporal life). To prevent this, his father provided him with many luxuries and pleasures. But, as a young man, he once went on a series of four chariot rides where he first saw the more severe forms of human suffering: old age, illness, and death (a corpse), as well as an ascetic renouncer. The contrast between his life and this human suffering made him realize that all the pleasures on earth where in fact transitory, and could only mask human suffering.

The forum—organized by Jawaharlal Nehru University (JNU), New Delhi, in collaboration with the Indian Council for Cultural Relations (ICCR), the Indian government,and the International Buddhist Confederation (IBC)—was a regional conference conducted as part of the first-ever Global Buddhist Conference, planned by the ICCR in collaboration with the IBC and Nava Nalanda Mahavihara for 19–20 November under the theme “Buddhism in Literature.”*

Speakers presented research papers on various topics related to Buddhist ethics and philosophical traditions that have spread and taken root in various parts of the world. They also discussed Buddhist practices, arts, philosophical schools, literature, and other aspects of Buddhist heritage. Some of the conference participants. Image courtesy of Upender RaoThe conference began on 27 October with an inauguration session, which included speeches by the chief guest, Meenakshi Lekhi, Minister of State for External Affairs and Culture, and guests of honor Ven. Dr. Dhammapiya, secretary general of the IBC, and Chinmoy Naik, deputy director general of the ICCR. Prof. Chowduri Upender Rao, conference director, professor of Sanskrit and Pali at the School of Sanskrit and Indic Studies at JNU, delivered a welcome address.

During the inauguration session, Lekhi congratulated the organizers and participants: “I am happy to know about this conference on the theme of [the] spread of Buddhist thought. We all know that the Bhagavan Buddha lived in Kapilavasthu in his early life. He found the Four Noble Truths, propagated the Middle Path, and many other teachings. According to tradition, as recorded in the Pali Canon and the Agamas, Siddhartha Gautama attained the Bodhi sitting under the Bodhi tree, situated in Bodh Gaya. Later the Buddha . . . traveled in several parts of northern India and gave his teachings around 45 years. Later the Buddhist thought spread throughout the world. It has grown in distinct streams and practices. I congratulate Prof. Upender Rao and his team on this noble endeavor. I congratulate all participants from various countries. Thank you, Jai Hind.”**

The conference was divided into six sessions, with 24 presentations by speakers from India, Bulgaria, Indonesia, Italy, Latvia, Lithuania, Thailand, Ukraine, and Vietnam. In-depth discussions followed most of the presentations. Presentation by Le Chi Luc. Image courtesy of Upender RaoThe valedictory session at the end of the two-day conference included an address by Prof. Upendra Rao and concluding speeches from Prof. Battu Satyanarayana,vice-chancellor of the Central University of Karnataka, Kadaganchi; chairperson Prof. Santosh Kumar Shukla,dean of the School of Sanskrit and Indic Studies at JNU; and guests of honor Prof. Amarjiva Lochan, dean of international relations at the University of Delhi, and Ven. Dr. Tejawaro Thero, vice president of Golden Mountain Monastery, Kaohsiung, Taiwan.

The organizers of the conference will upload an ebook of presentation abstracts and conference proceedings to the ICCR website.

Although Buddhism became virtually extinct in India (ca. 12th century C.E.)—perhaps because of the all-embracing nature of Hinduism, Muslim invasions, or too great a stress on the monk’s way of life—as a religion it has more than proved its viability and practical spirituality in the countries of Asia to which it has been carried. The many forms and practices that have been developed within the Buddhist fold have also allowed many different types of people to satisfy their spiritual needs through this great religion.