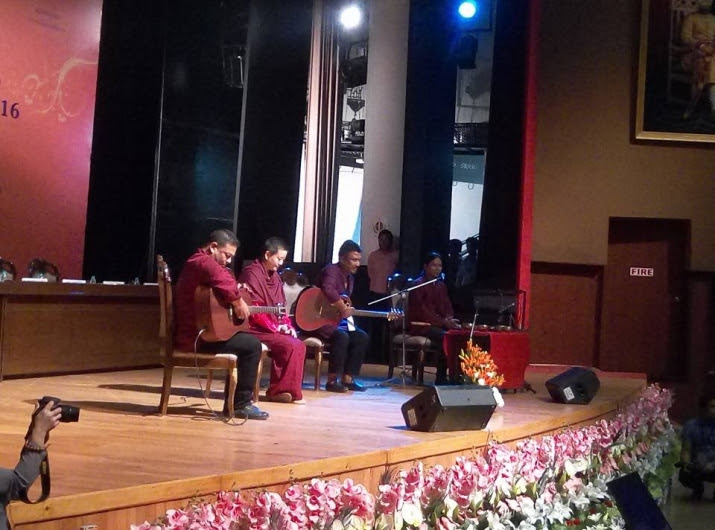 Ani Choying Drolma performs at the inauguration of the conclave. From Facebook

Prime Minister Narendra Modi and UP chief minister Akhilesh Yadav will attend the inaugural function of International Buddhist Conclave at Sarnath starting from October 2 to 4. Foreign delegates and Buddhists from over 40 countries will attend the conclave that will conclude at Bodh Gaya in Bihar.

Ministry of Tourism is hosting an International Buddhist Conclave from 2–6 October in an ostensible effort to promote tourism to the country’s Buddhist sites, but also to woo the world’s Buddhists in a display of favor for the Buddhist religion. The main events will be held in the Indian capital of New Delhi and two of the four most sacred Buddhist sites in the country, Bodh Gaya and Varanasi.

Buddhist delegates and organizations from around the globe arrived in New Delhi on Sunday to attend an opening event featuring Nepalese nun and musician Ani Choying Drolma, who is a frequent special guest at large-scale Buddhist events in India. On Monday morning, guests were introduced to the life and journeys of the Buddha by Plum Village dharmacharya Shantum Seth at the National Museum. They were due to fly to Varanasi in the afternoon to retrace the Buddha’s journey to Sarnathon Tuesday, before attending a presentation about India as a Buddhist destination by the Ministry of Tourism and the state government of Uttar Pradesh.

The conclave’s objective is to engage the “worldwide community of Buddhists, including the sangha, in supporting India’s vision to develop Buddhist circuits and awaken the world to Buddha’s India,” according to the timetable of events sent to guests. The program includes exhibition stalls hosted by various state governments, as well as cultural shows to highlight the economic, cultural, and diplomatic potential of Indian Buddhist sites.

The event was organized “with a view to showcase and project the Buddhist heritage in India and boost tourism to the Buddhist sites in the country and cultivate friendly ties with countries and communities interested in Buddhism,” stated the Ministry of Tourism in its invitation. It also noted: “The conclave will have a spiritual dimension, an academic theme, and a diplomatic and business component. Participants will include senior leaders of various Buddhist sects, scholars, public leaders, journalists, and people from the tourism industry.” Guests from France and Poland. From Shantum Seth

The week-long event is the latest in a campaign by the Indian government, led by prime minister Narendra Modi and his ruling Bharatiya Janata Party, to present itself as a domestic and international conduit of Buddhist diplomacy. In 2015, Modi was the guest of honor at the conference Samvad — A Global Hindu-Buddhist Initiative for Conflict Avoidance and Environment Consciousness, which was held from 3–4 September in New Delhi. The Indian premier also joined the conference delegation last year at Bodh Gaya on 5 November to meditate under the Bodhi Tree, give a speech touting his credentials as a custodian of India’s Buddhist heritage, and to listen to an ecumenical Theravada-Mahayana-Vajrayana chant.

Exactly one year and one month from when Modi visited Bodh Gaya, this year’s conclave guests will fly to the center of the Buddhist world on Wednesday to attend a presentation titled “Pilgrim Trails — Buddha Dharma Yatra at Sujata Kutir,” which details India’s vision for its stewardship of cultural and historical Buddhist heritage. On Thursday they will engage in silent walking meditation before heading to the main shrine and the Bodhi Tree. There will be an ecumenical chanting of sutras from different traditions before the conclave concludes and the delegates return to New Delhi.

Modi’s “Buddhist diplomacy” has captured the imagination of many Buddhists in India and other countries, although his more cynical attempt to translate his admiration of Dalit Buddhist leader B. R. Ambedkar (1891–1956) into domestic votes among India’s Dalit community in Uttar Pradesh has met with mixed results. His international “Great Game” with Nepal also suffered a setback in May this year, with Indian officials boycotting a Chinese-supported conference in Lumbini, a contender with Bodh Gaya to be recognized as the epicenter of the Buddhist world.
With a view to showcase and project the Buddhist heritage and pilgrim sites, the ministry of tourism organises International Buddhist Conclave. Earlier, the conclave was organised in New Delhi and Bodhgaya (2004), Nalanda and Bodhgaya (2010), Varanasi and Bodhgaya (2012), and Bodhgaya and Varanasi (2014). The ministry of tourism had introduced two schemes PRASAD and Swadesh Darshan – the integrated development of theme-based tourist circuits in 2014-15. Under PRASAD, 12 cities including Amritsar, Ajmer, Dwaraka, Mathura, Varanasi, Gaya, Puri, Amaravati, Kanchipuram, Vellankanni, Kedarnath and Guwahati have been identified for development. Under Swadesh Darshan scheme, spiritual circuit has been identified as theme circuit for development. “Sarnath is one of the destinations being covered under Swadesh Darshan,