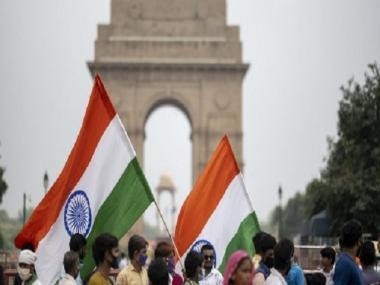 By  —  Shyamal Sinha
As India gears up to celebrate its 75th Independence Day on August 15, the national holiday reminds each citizen of the sacrifices of our freedom fighters. The long freedom struggle came with numerous sacrifices after which India got independence from the 200-year-long Imperial British rule. On August 15, 1947, the British colonizers finally left India but divided the nation into two independent states- India and Pakistan.

India achieved independence from British rule on 15 August 1947. This year marks the 75th anniversary of the culmination of our freedom struggle. As we commemorate the occasion, let us take a look at the history and significance of this date.

The British had ruled over India for almost two centuries, starting from 1757. But the Indian independence movement had gained strength for years, with the demand of poorna swaraj or complete independence from colonial rule echoing in the streets.

The emergence of leaders such as Mahatma Gandhi, Jawaharlal Nehru, Sardar Vallabhbhai Patel and Netaji Subhash Chandra Bose gave power to the freedom struggle. Finally, the British decided to leave India, transferring power back to the country.

Lord Mountbatten, the Viceroy of India, had been given a mandate to finish the transfer of power by June 1948. However, Mountbatten decided that the British would leave early.

The Indian Independence Bill was introduced in the British House of Commons on 4 July, 1947 and passed two week later. The Bill declared that British rule of India would end on 15 August 1947. It also led to the establishment of India and Pakistan as independent nations.

On 15 August 1947, as India transitioned into an independent nation, the first Prime Minister of the country, Jawaharlal Nehru addressed the nation and unfurled the Indian tricolour at the Red Fort. Since then, the tradition has continued.

This year, the theme of the celebrations would be ‘Nation First, Always First’. Prime Minister Narendra Modi would continue the tradition of addressing the nation from the Red Fort. The Olympians who won medals at the Tokyo Olympics would get special invites for the event.

However, celebrations would kept toned down due to the ongoing coronavirus pandemic.

The song ‘Bharoto Bhagyo Bidhata’ composed in 1911 by Nobel laureate Rabindranath Tagore was renamed as ‘Jana Gana Mana’ and adopted by the Constituent Assembly of India as the national anthem on January 24, 1950.

2. The Indian national flag with three horizontal stripes of red, yellow and green was hoisted on August 7, 1906, at Parsee Bagan Square in Kolkata. The first variant of India’s current national flag was designed by freedom fighter Pingali Venkayya in 1921. The current flag with saffron, white and green colours and the Ashok Chakra in the middle was officially adopted on July 22, 1947, and hoisted on August 15, 1947.

3. Five other countries celebrate their independence on August 15 along with India. They are Bahrain, North Korea, South Korea and Liechtenstein.

4. The Indian flag is manufactured and supplied from only one place in the nation. The Karnataka Khadi Gramodyoga Samyukta Sangha (KKGSS), located in Dharwad in Karnataka, has the authority to manufacture and supply the Indian national flag. According to the Bureau of Indian Standards (BIS), the flag is manufactured only with hand-spun and handwoven cotton khadi wafting.

5. Even after India’s independence, Goa was still a Portuguese colony. It was annexed to India by the Indian Army only in 1961. Thus, Goa was the last state to join the Indian territory.

However, celebrations would kept  slow pace due to the ongoing coronavirus pandemic.