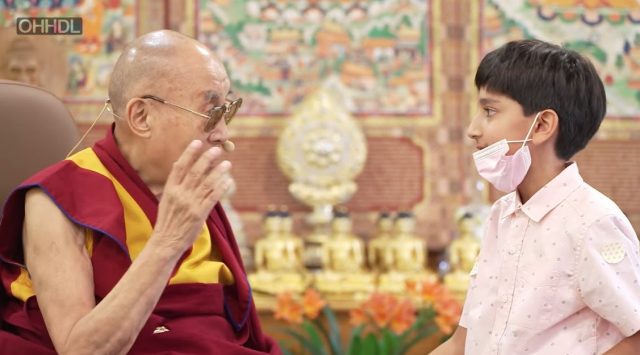 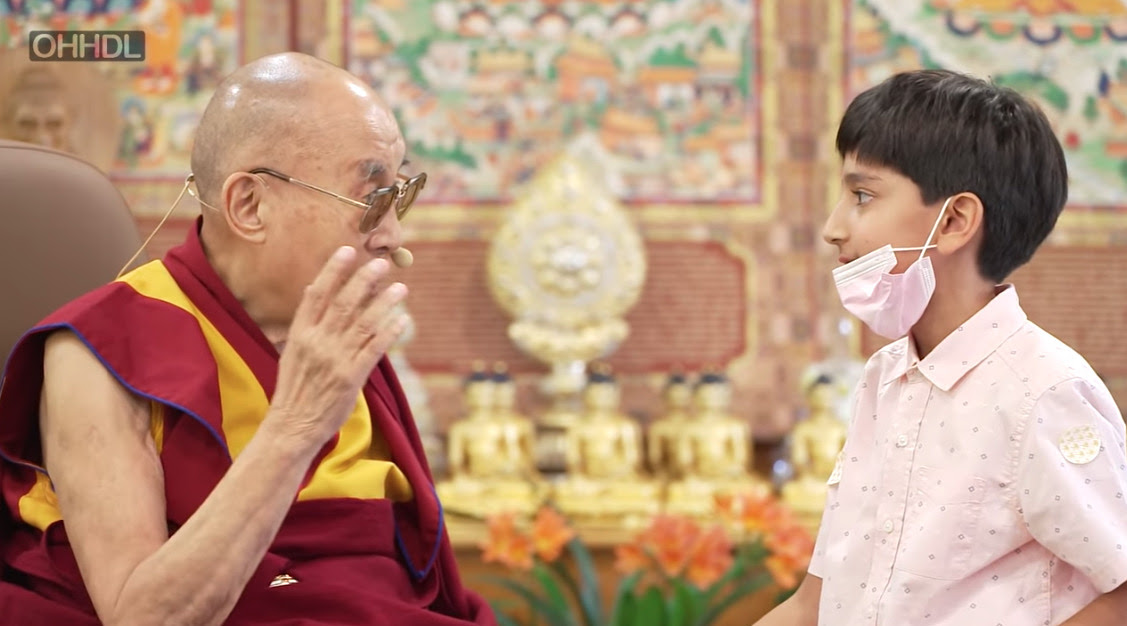 His Holiness the Dalai Lama addressing a young kid.

“My generation has faced a lot of problems. However, I am hopeful the younger generation will have a more peaceful and just future,” said His Holiness the Dalai Lama while addressing a group of children among the attendees at his residence on Monday, 11 April.

The Tibetan spiritual leader pointed out to the younger generation the responsibility of creating a genuine peaceful world based on the concept of the oneness of 7 billion human beings.

Here in exile, we have our own organized community and have re-established all those historical monastic traditions in this country. So now, one of my commitments is to revive the ancient Indian knowledge of ahimsa and karuna, not through prayer but through training the mind and emotion.

I have always considered myself a simple Buddhist monk. The seven billion human beings in the world are the same mentally, emotionally and physically. This conviction brings a sense of oneness with seven billion beings. Some Lamas, including some Indian gurus, they feel they have something special (laughs).

I, too, face some danger of people praising me too much. Then, at that time, you must tell yourself, “You are a humble follower of Buddha.” That’s very important. If you yourself become a slave of destructive emotion, how can you teach other people?Dalai Lama

Modern education came from the West, introduced by the British. This system does not know how to tackle emotional problems through meditation. Modern education is oriented towards material wealth. So, when people face anger, hatred, fear or jealousy, they do not know how to tackle it. India must revive ancient knowledge through analytic meditation to reduce destructive emotion, and increase constructive emotion.

A modern education is very much oriented towards material wealth—that’s not adequate. How to tackle anger, fear—these are not religious matters, these are a question of health of the mind of the human being. Education should include education about peace of mind, not based on religious faith but on common sense.

I always consider myself a follower of Mahatma Gandhiji. In the philosophical field, my knowledge may be better than Gandhiji (chuckles) because we study from childhood the Nalanda texts, which deal with quantum physics. When I have discussions with scientists on quantum physics, I respect them, but mentally, I feel I know better (laughs). Quantum physics clearly explains the differences between appearance and reality. In order to tackle our destructive emotions such as anger and extreme attachment, we need to understand this gap—that nothing exists objectively as it appears but is entirely dependent on the observer.

I consider myself one of seven billion human beings. I see no difference. Chinese, Tibetan, Indian, European… We are the same, emotionally, physically, mentally. On that level, my commitment is to try to promote peace of mind among seven billion beings, to offer compassion or karuna, strictly secularly, not based on religion.

My second commitment as a Buddhist monk is promotion of religious harmony. I have full confidence that religious harmony is possible. Look at India. For more than 2,000 years, so many religions from outside have lived together alongside the home-grown traditions. There are little problems, but that’s mainly because politicians manipulate; but basically, religious harmony is very much alive here.

The source of the problem is a self-centred attitude. The antidote is altruism. With greater altruism, the self-centred attitude reduces. This attitude brings anger, hatred and fear. Science has found that the basic human nature is compassionate. Our basic nature is to be social, appreciate the other’s kindness, smile. Live in kindness.

“Now today, global warming is one serious matter. It is alerting us to act as one human community,” advised His Holiness the Dalai Lama and meanwhile dissuaded placing too much emphasis on the manmade superficial barriers.