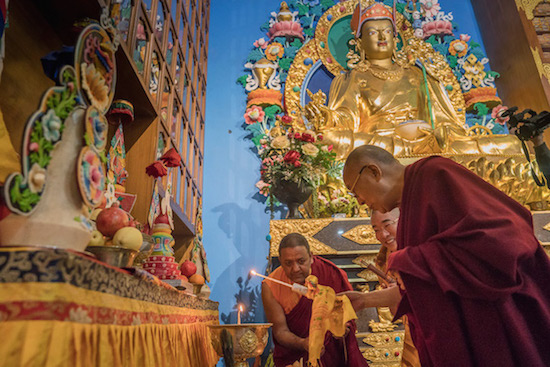 BODHGAYA, The origin of monastery. Bodh Gaya in India is the holy place where Sakyamuni Buddha attained enlightenment. Over two thousand years,

Speaking to the monks and members of the monastery, His Holiness extolled Penor Rinpoche’s immense contribution to the preservation of the Nyingma tradition and its study. As a result of His Eminence’s dedication and hardwork to introduce debate and study of many great Buddhist texts, the students of Namdroling Monastery are most learned and accomplished in the study His Holiness said.

From tomorrow, His Holiness, along with monks of Namgyal Monastery and senior lamas, will lead a ritual preparation to consecrate the venue. The Kalachakra preliminary teachings will begin from 5 – 8 January 2017.

His Holiness will confer the 34th Kalachakra initiation from 11 – 13 January, while the students preparation (preliminary initiation) will begin on 10 January.