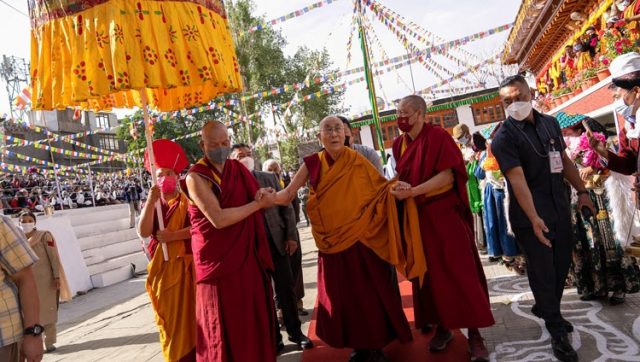 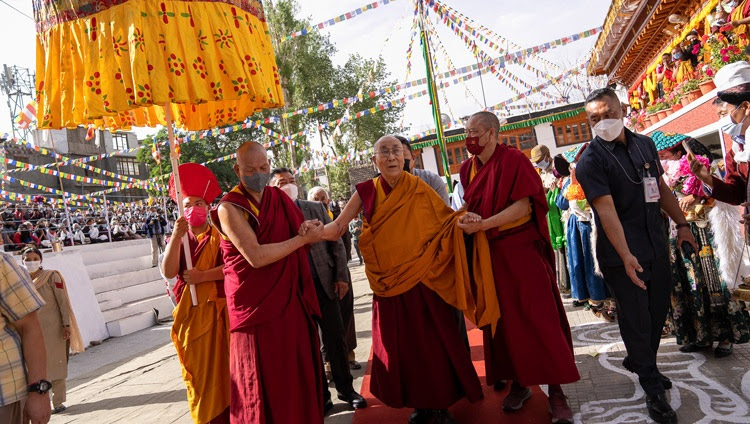 His Holiness the Dalai Lama arriving at the Jokhang in Leh, Ladakh, UT, India on July 23, 2022. Photo by Tenzin Choejor

His Holiness the Dalai Lama undertook his first public engagements on 23rd  july , making pilgrimages to the Jokhang, the principal Buddhist Temple in the centre of Leh, the Jama Masjid and Anjuman-e-Imamia mosques, as well as the Moravian Church in Leh.

His Holiness was welcomed on arrival at the Jokhang by Thupten Chhewang, President of the Ladakh Buddhist Association and other dignitaries. Once inside, His Holiness paid his respects before the statues of the Buddha, Manjushri, Thousand Armed Avalokiteshvara, and Guru Padmasambhava. He warmly greeted the guests representing monasteries, NGOs and others before taking his seat facing the statue of the Buddha that emulates the Lhasa Jowo.

Thupten Chhewang made the customary offering of a mandala to His Holiness, following which other representatives presented silk scarves to him. Chanting of the Prayer of Three Continuous Practices was followed by a recitation of the Heart Sutra.

His Holiness began by greeting all those assembled in the Jokhang and in the courtyard outside, “Tashi Deleg-we are all very old friends and the bonds between us are rock-solid. I’d like to thank you for your faith and devotion, which I take as a source of encouragement. 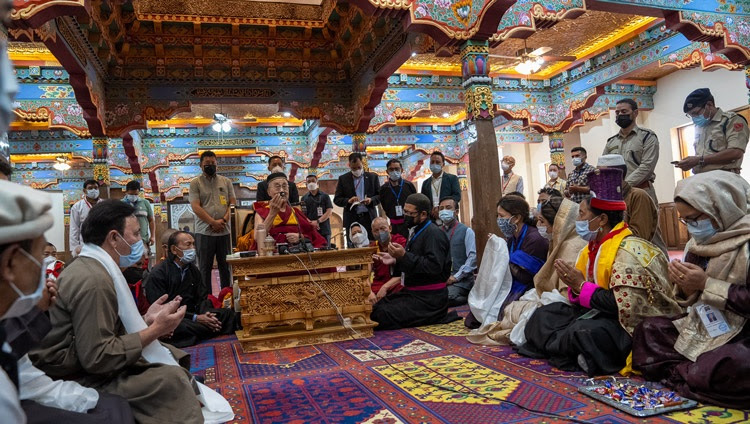 His Holiness the Dalai Lama speaking to members of the Sunni community at the Jama Masjid in Leh, Ladakh, UT, India on July 23, 2022. Photo by Tenzin Choejor

“Although we will be meeting again soon, this morning I want to tell you how determined I am to continue contributing as much as I can to the flourishing of the Dharma for the benefit of all sentient beings. It is very important that we study the Dharma, reflect on what we’ve learned and then put into practice what we’ve understood. We should study the Three Baskets, which comprise the words of the Buddha, and engage in the practice of the Three Trainings.”

From the Jokhang His Holiness went to the Sunni Mosque, the Jama Masjid. He told the audience gathered there what a pleasure it was for him to make a pilgrimage to this place of worship, which is consistent with his commitments to foster inter-religious harmony.

“It is my practice to offer prayers at other people’s places of worship whenever I can. Since all religions convey a message of compassion (karuna), even though their philosophical views may differ, they are worthy of respect.

“I’ve been on friendly terms with Muslims since I was a child in Amdo. Later in Lhasa too I was friendly with the small community of Muslim traders who used to regularly attend official functions of the Tibetan Government. So here today I’m pleased to be meeting with Muslim brothers and sisters once again.”

Next, His Holiness visited the Shia Mosque known as Anjuman-e-Imamia. While welcoming His Holiness to the Imam Bargarh, his host recalled that it was His Holiness who inaugurated this Mosque in 2006, since which time the congregation has welcomed him back several times. Different speakers praised His Holiness as a peace messiah and a harbinger of brotherhood. “Your presence here today,” one speaker declared, “sends a strong and much needed message of unity, peace and brotherhood among the different religious groups of Ladakh to the wider world.” 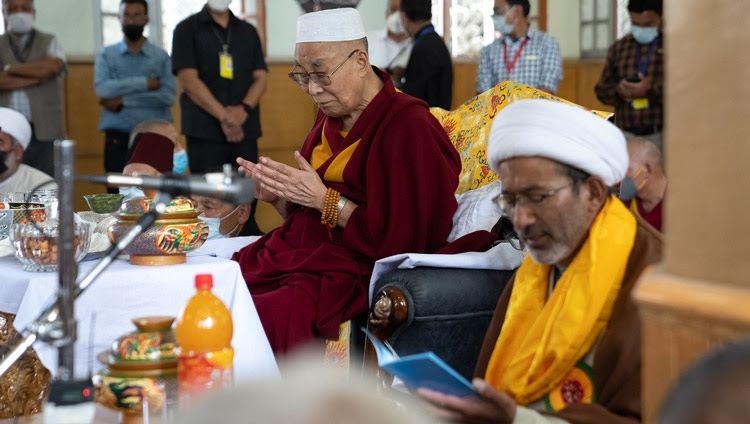 His Holiness the Dalai Lama joining in prayers at Anjuman-e-Imamia, the Shia Mosque in Leh, Ladakh, UT, India on July 23, 2022. Photo by Tenzin Choejor

His Holiness remarked that India has a good, long-standing custom of religious harmony that is especially evident in Ladakh.

“Since we human beings are all the same, mentally, physically and emotionally, and since we all seek happiness and have a right to be happy, we should always try to help one another whenever we can.”

Finally, His Holiness paid a visit to the Moravian Church in Leh where the congregation welcomed him by singing a song in appreciation of his contribution to peace and harmony in the world.

“I deeply appreciate the warm welcome you’ve given me today,” His Holiness told the assembly. “It reminds me of the many Christian brothers and sisters, scientists and religious leaders, such as the Polish Pope, John Paul II, among them, with whom I have made friends.”

He spoke of his admiration for the way Christians have shown kindness in helping poor and needy people the world over, as well as their contribution to world development, which he regards reflecting a sense of the oneness of humanity. 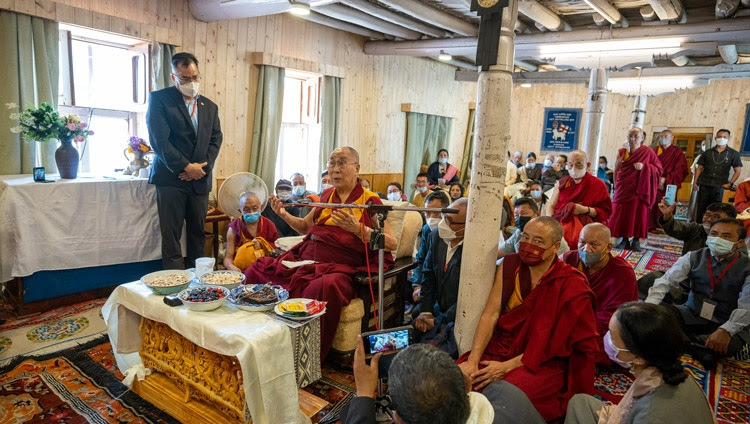 His Holiness the Dalai Lama addressing the congregation at the Moravian Church in Leh, Ladakh, UT, India on July 23, 2022. Photo by Tenzin Choejor