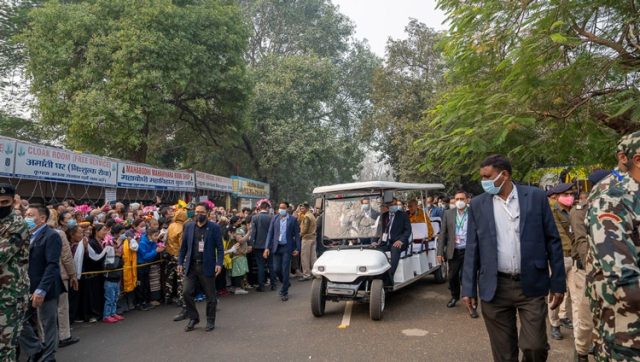 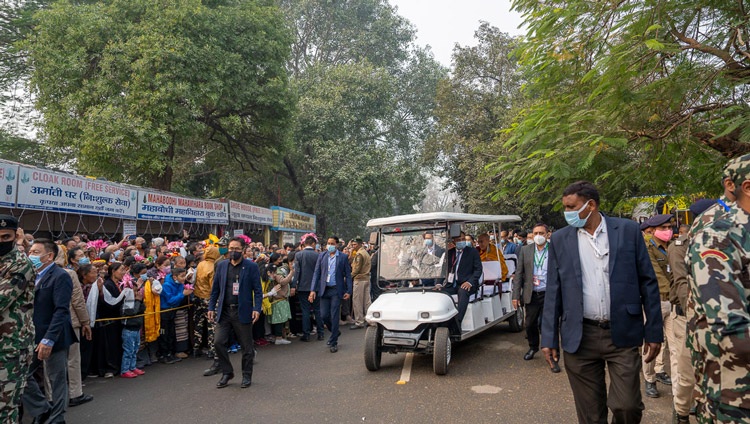 His Holiness the Dalai Lama making his way to the Wat-pa Thai Temple in Bodhgaya, Bihar, India on December 27, 2022. Photo by Tenzin Choejor

Bodhgaya  —  This morning, as the sun hung in the misty sky over the Mahabodhi Temple, His Holiness the Dalai Lama rode in a golfcart from Gaden Phelgyeling Tibetan Monastery to Wat-pa Thai Temple. He smiled and waved to people, who lined the way several rows deep, holding silk scarves, or flowers in their folded hands.

His Holiness was warmly welcomed by the monks at the temple and escorted inside. He was invited to consecrate a statue of the Buddha before taking his seat on the platform among other guests who included Ven Dr Warakagoda Dhammasiddhi, Sakya Gongma Trichen Rinpoché and the Gaden Tri Rinpoché.

Buddhist refuge prayers were chanted in Pali, followed by a recitation of the ‘Heart Sutra’ in Tibetan.

In his welcome address Ven Khensur Lobsang Gyaltsen first paid his respects and expressed his appreciation to His Holiness and the principal guests for their presence. He explained that the five-year Pali and Sanskrit International Bhikkhu Exchange Program being inaugurated today has been organized in partial fulfilment of His Holiness’s commitment to promote human values, to encourage harmony among the world’s religious traditions, to ensure the preservation of Tibetan culture and to prompt a revival of awareness of the value of ancient Indian knowledge.

“We are all followers of Buddha Shakyamuni,” he declared, “and bringing about world peace is our common goal. The program is intended to strengthen relationships between followers of the Pali and Sanskrit traditions, allowing them to learn about each other.“

Ven Dr Phra Bodhinandhamunee, Abbot of the Wat-pa Temple, expressed his appreciation that this was the third occasion on which His Holiness had blessed the community. He noted that the five-year exchange program was to begin today from these very premises.

Ven Dr Dhammapiya, Secretary General of the International Buddhist Confederation, remarked that the Buddha spoke of one path, one dhamma, therefore we have to keep our hearts and minds open and appreciate how Buddhism has evolved in the array of Buddhist countries.

“Let us connect with one another,” he urged and noted a slogan he saw in the airport yesterday— ‘One Earth, One Family, One Future’. “On such a basis we can create a peaceful, harmonious world.” 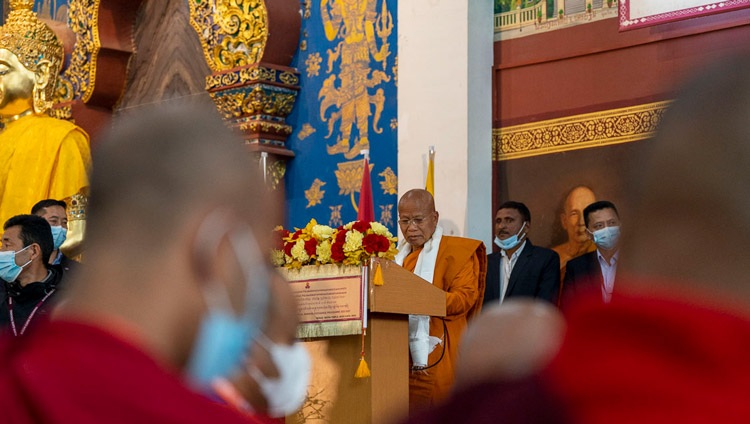 The Chief Guest Most Ven Dr Warakagoda Dhammasiddhi, who was sitting next to His Holiness, praised the intention to create mutual understanding among different Buddhist cultures with closer interaction among their monks. He expressed a wish to convey the heartfelt gratitude of the Sri Lankan Maha Sangha for this precious opportunity.

The formal launch of the exchange program took place with the unfurling of banners by the principal guests and signing of a declaration of intent.

His Holiness was then invited to address the gathering:

“All of us gathered here at this sacred site of Bodhgaya are followers of the Buddha. We all try to implement his teaching on the basis of an understanding of the four seals.

“We all want to be happy, therefore we should seek friendship and harmony between us. Since religious practice is about cultivating goodwill and affection it’s very sad when we witness quarrelling among members of this or that tradition. As far as we are concerned, we must do our best to follow the teaching of the Buddha sincerely. If the Buddha were to observe us arguing or criticising each other, I think he might ask us not to do that.

“We follow the same teacher and essentially the same teaching, therefore there’s every reason why there should be harmony between us whether we belong to the Pali or Sanskrit tradition.

“When I look at the image of the Buddha on the wall over there and see the position of his hands, I’m reminded that they indicate not that he would stroke our heads, nor that he would clench a fist to hit us. It was teaching he gave us and encouraged us to put it into effect. This means practising steadily day by day. That’s how we too can eventually become like the Buddha. 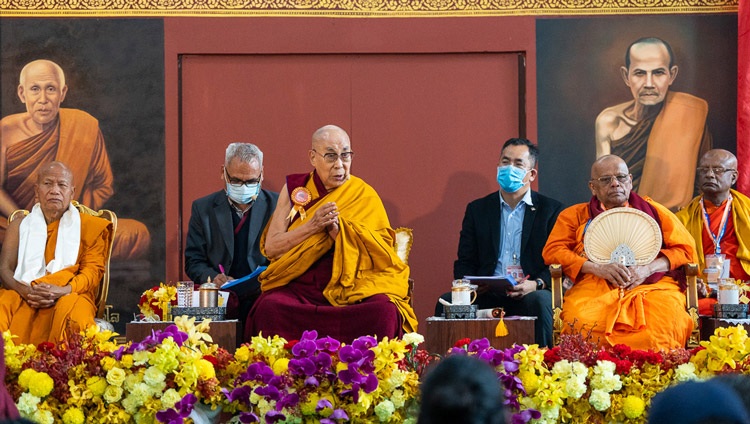 His Holiness the Dalai Lama addressing the gathering at the inauguration of the Pali & Sanskrit International Bhikkhu Exchange Program at Wat-pa Thai Temple in Bodhgaya, Bihar, India on December 27, 2022. Photo by Tenzin Choejor

“The Buddha taught us that the whole of the cycle of existence is empty of any essential core. Consequently, it’s possible to thoroughly purify the mind. I’ve tried to be a sincere practitioner and follow the Buddha’s teaching in my own life. As the mantra in the ‘Heart Sutra’ indicates, by applying what the Buddha taught we can proceed towards enlightenment ourselves. This is a goal I wish to fulfil and I seek the Buddha’s blessings to be successful in doing so.

“There may be some differences between our various traditions, but the important point is that we are all followers of the same teacher. Therefore, it’s essential that we are friendly and respectful towards one another.

“I try to cultivate the awakening mind of bodhichitta and an understanding of emptiness every day and I urge you too to try to cultivate an altruistic state of mind. I am motivated by the following prayer:

“Wherever the Buddha’s teaching has not spread
And wherever it has spread but has declined
May I, moved by great compassion, clearly elucidate
This treasury of excellent benefit and happiness for all.

“Whatever the circumstances, it’s always important to generate a kind heart.”

“It gives me great pleasure to offer a vote of thanks to everyone who has taken part in the inauguration of this exchange program. I thank the guests, and especially His Holiness, for joining us today. I also thank the organizers and the Office of His Holiness the Dalai Lama for their support.

“May all beings be happy and well.”

After commemorative photographs had been taken, everyone present was invited to a delicious lunch. 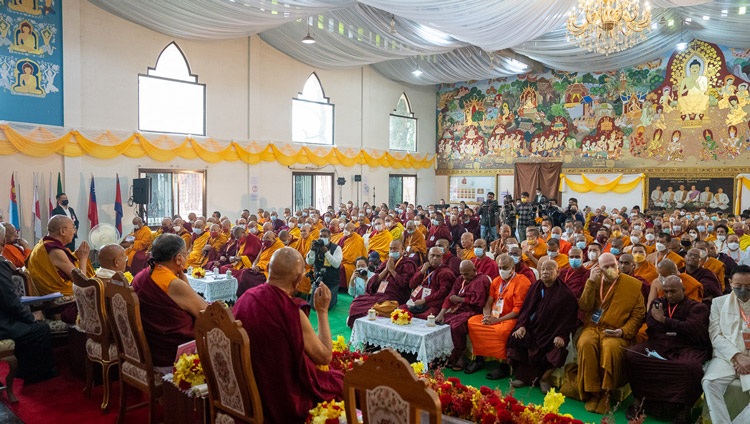