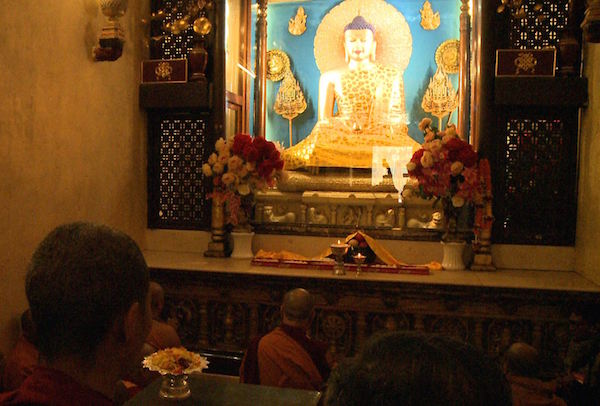 HH second day of arrival in Bodh Gaya,  the Dalai Lama today visited the Mahabodhi Temple, the seat of Lord Buddha’s enlightenment to offer prayers at around 8:50 am.

In 1891, the Mahabodhi Society was founded with the aim of reclaiming Bodhgaya and the Mahabodhi temple from Hindu to Buddhist control. The 1949 Bodhgaya Act recognize the site as a Buddhist holy place.

In 2002, UNESCO declared the Mahabodhi Temple a World Heritage Site and recommended “the Indian authorities to develop an overall management plan to protect the values of the World Heritage site.

His Holiness was accompanied by Chair of the 34th Kalachakra Organising Committee, Kalon Ven Karma Gelek Yuthok of Department of Religion and Culture, Kalon Phagpa Tsering Labrang, Department of Security and other representatives of the Central Tibetan Administration.

Devotees from all around India and world lined up the streets leading to the holy site of Mahabodhi temple to greet His Holiness.

Earlier His Holiness gave a private audience to a group of Tibetan pilgrims from Tibet.

The Mahabodhi Mahavihara is revered as the holiest place of Buddhist pilgrimage in the world. It is among the 84,000 shrines built by King Ashoka in the 3rd century BC.

Immediately next to the Mahabodhi Temple is the Bodhi Tree, a descendent of the very tree under which the Buddha was enlightened, and the Jewel Walk, marking the place where the Buddha is said to have practiced walking meditation for seven days after his enlightenment.
Share this...