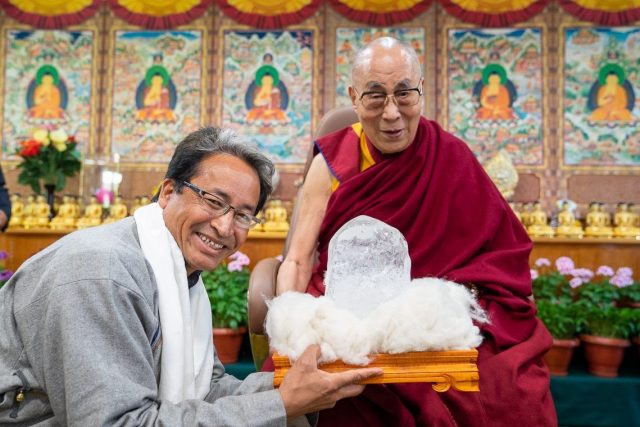 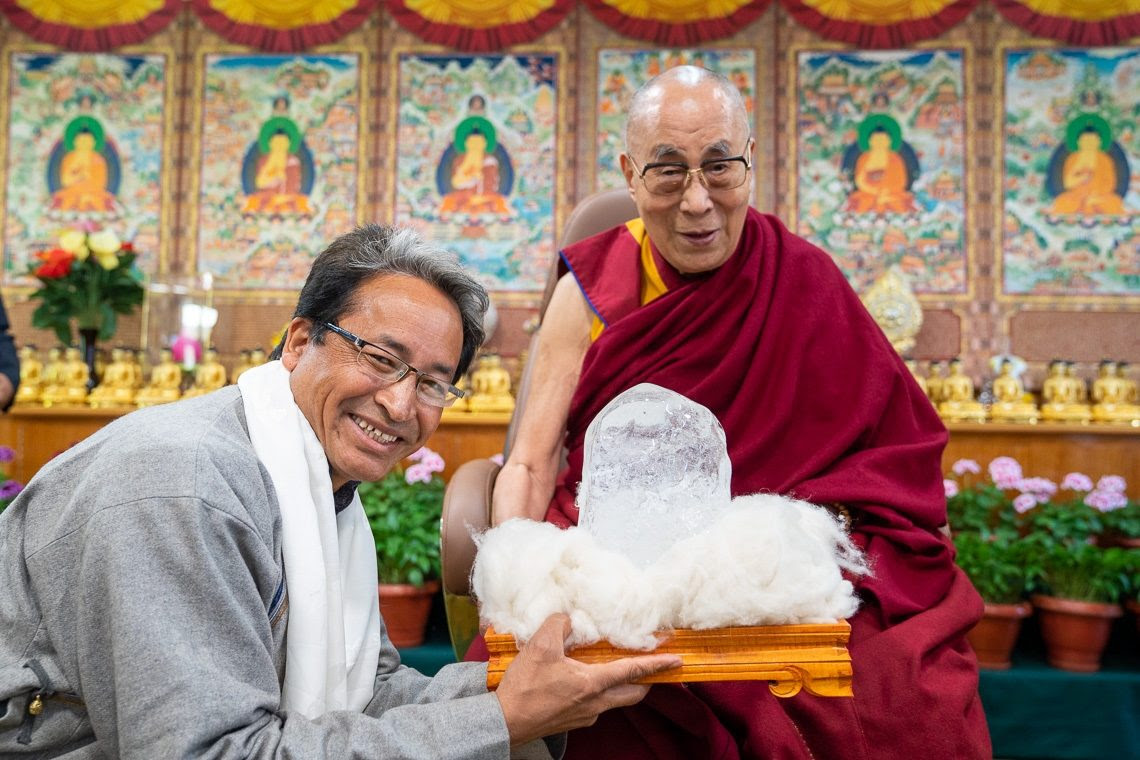 Today, Earth Day 2022, His Holiness the Dalai Lama met with participants in a Dialogue for Our Future that has been convened by a number of organizations here in Dharamsala. As he entered the room His Holiness smiled and wished his guests “Good morning”.

First of all, climate mitigation innovator Sonam Wangchuk presented His Holiness with a block of ice, explaining that it had been taken from a glacier on the Kardungla pass in Ladakh to highlight the urgency of climate change on the Tibetan Plateau. It was brought by a team of young people on bicycles, public transport and electric vehicles to convey a message—‘Please live simply so we in the mountains can simply live.’

In his response His Holiness told the gathering, “I really appreciate that more and more people are showing concern for the environment. Ultimately water is the basis of our lives. Over the coming years we have a responsibility to take steps to preserve the great rivers that are the source of water for so many. Within my lifetime I’ve seen a reduction of snowfall in Tibet and a consequent reduction in the volume of the rivers.

“In the past, we took water for granted. We felt we could make unrestricted use of it without giving much thought to where it came from. Now, we need to be more careful about preserving our water sources. I believe that we have the technology to transform salt water, sea-water, into sweet water with which we could green the deserts in many places and grow more food.

“Now, we have a responsibility to ensure that future generations will continue to enjoy clean water. This is a way of expressing compassion for them. If we don’t make the effort, there is a risk of our world becoming a desert. If that happens this beautiful blue planet may become just an arid, white rock with no water.

“It often occurs to me that without water we cannot survive. Some of my Indian friends say that one solution is to plant more trees—and it will help. My friend Sunderlal Bahuguna asked me to promise to do whatever I can, whenever I can, to encourage people to plant and care for more trees, and I try to fulfil his wish.”

Martin Bursik who is a former Minister of Environment of the Czech Republic thanked His Holiness for being the inspiration that had brought this group of environmentalists together. He outlined four topics that will be the focus of their dialogue.

1. The state of the planet as described in the latest report of the Intergovernmental Panel on Climate Change (IPCC).
2. The role of technology, such as wind power, solar power and so forth in offsetting the climate crisis.
3. Tibet is regarded by some environmentalists as equivalent to a Third Pole. Not only are its glaciers receding, but as they do methane is released from the melting permafrost.
4. Energy democracy. How to change the energy model so ordinary people are more directly involved.

Bursik told His Holiness that as a result of this Dialogue for Our Future a manifesto will be prepared to be released in Egypt at the time of the COP27 meeting with a view to taking steps to protect the Tibetan Plateau and stop climate change.

“Previously we took our climate for granted,” His Holiness replied, “we thought of it as just part of nature. Some of the changes that have taken place are related to our behaviour, so we have to educate people about the factors that contribute to climate change. We have to pay more attention to ways to preserve our environment. This means making a basic understanding of climate change and its effect on the environment part of ordinary education.

Elizabeth Wathuti, a climate activist from Kenya asked His Holiness how we can appeal to world leaders to act out of love and compassion. He told her that we can let them know that by taking care of others we essentially take care of ourselves. He pointed out that the health and happiness of the community is the source of individuals’ health and happiness. He quoted several verses from the 8th century Indian Buddhist master Shantideva:

For those who fail to exchange their own happiness for the suffering of others, Buddhahood is certainly impossible—how could there even be happiness in cyclic existence? 8/131

Why say more? Observe this distinction: between the fool who longs for his own advantage and the sage who acts for the advantage of others. 8/130

“Wherever I go,” His Holiness remarked, “I smile and consider that, in being human, those I meet are just like me. Thinking of other people in terms of ‘us’ and ‘them’, focusing on how they are not like us, leads to mistrust and isolation. It’s much more helpful to think of how all seven billion human beings are fundamentally the same because we have to live together.”

Kim Stanley Robinson, who described himself as a science fiction writer, asked how Buddhism can help science. His Holiness told him that scientists have been interested to discuss ways to achieve peace of mind because they recognise that if the mind is disturbed people won’t be happy. He emphasised the benefits of discovering more about mental consciousness and learning to train it on the basis of reasoning.

Tsering Yangki, a Tibetan business woman from Canada, wanted to know how to make business and the economy part of the solution to the global challenge of climate change. His Holiness replied that while technology is one factor in the improvement of physical comfort, the most important change we can make is in training our minds.

Arash Aazami, an energy systems innovator, stated that energy is abundantly available, yet, we are fighting over it. He asked how we balance the needs of nature, human beings and the economy.

“Material development is both necessary and helpful,” His Holiness replied, “but there is a limit to what can be achieved. Meanwhile, cultivating our mind is a more effective way of addressing our needs. The Buddha fasted for six years intent on being of service to others. The Tibetan yogi Milarepa and, in recent memory, Mahatma Gandhi lived in the most meagre circumstances, but both achieved a deep level of mental satisfaction.

“The over-exploitation of nature has negative consequences. We have to take a broader, longer term perspective and make peace of mind our primary aim.”

Vibha Dhawan, Director General of TERI, The Energy and Resources Institute based in New Delhi, asked how we can we bring ethics, compassion, and a less materialistic way of living back to a natural, healthy and safe environment. His Holiness observed that as human beings we are brothers and sisters and we have to live together. And if that is to happen, it’ll be much more effective if we live in freedom, not under tight control, and cultivate a greater tolerance of other people’s views.

Christa Meindersma, the moderator for this meeting, who is an international lawyer with extensive experience in international diplomacy and conflict resolution told His Holiness how happy all the participants had been to be able to meet him today. She added that they would now open their dialogue and call to action.

“The survival of this planet, our only home, is in our hands,” she declared. “We’d like to come back, if we can, next year on Earth Day, please.”

His Holiness replied that over the next ten to fifteen years or so, he would be ready to meet again from time to time.