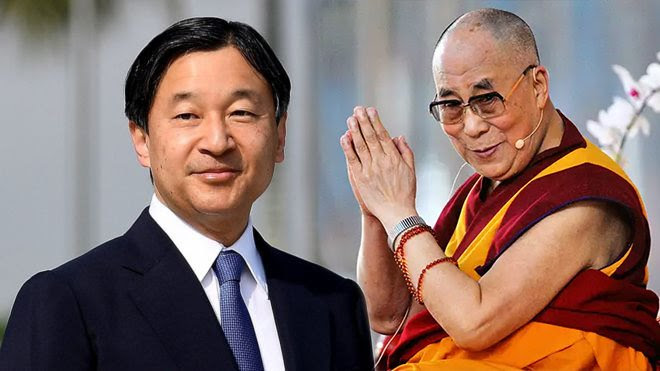 Dharamshala: His Holiness the Dalai Lama on Wednesday congratulated Japan’s new Emperor Naruhito on his enthronement and the dawning of the new Reiwa era.

Naruhito born 23 February 1960 is the current Emperor of Japan. He acceded to the Chrysanthemum Throne on 1 May 2019, beginning the Reiwa era, following the abdication of his father, Emperor Akihito, on 30 April 2019. He is the 126th emperor according to Japan’s traditional order of succession.

The Reigning Emperor”. The era of Naruhito’s reign bears the name “Reiwa” and according to custom he will be renamed Emperor Reiwa see “posthumous name”) by order of the Cabinet after his death. The name of the next era under his successor will be established after his death or before his abdication.

“I warmly admire Your Majesty’s determination,” His Holiness wrote, “to continue your respected father’s, the Emperor Emeritus’s, compassionate approach of interacting closely with the public, while fulfilling the responsibility of Symbol of the State.

“I have profound respect for the resilience of the people of Japan and for the way the nation rose up again from the ashes of World War II. In subsequent years too, Japan has faced unprecedented, natural disasters but has recovered thanks to a combination of hard work and strength of spirit. I have seen this with my own eyes when I had the opportunity to visit areas struck by the devastating earthquake and the tsunami of 2011. I met there with people affected by these calamities and we prayed together for those members of the community who had lost their lives.

“Over the last fifty years or so, during regular visits to Japan, I have deeply appreciated the interest and enthusiasm that people from all walks of life have shown in my efforts to encourage the cultivation of such fundamental human values as compassion and religious harmony.”

His Holiness concluded with a prayer that His Majesty’s reign will be successful, that the people will be happy, and that the new era will contribute to a more peaceful, compassionate world.

Naruhito is an honorary member of the World Commission on Water for the 21st century and patron of the Global Water Partnership, established by the World Bank, the United Nations, and the Swedish Agency of Development..

The Crown Prince was a patron of the Japanese Olympic Games Committee. On behalf of the crown, the prince carries out representative duties in Japan and abroad. The prince is also a supporter of the World Organization of the Scout Movement and in 2006 attended the 14th Nippon Jamboree, the Japanese national jamboree organized by the Boy Scout Association of Japan. The crown prince has also been an honorary vice-president of the Japanese Red Cross Society since 1994.