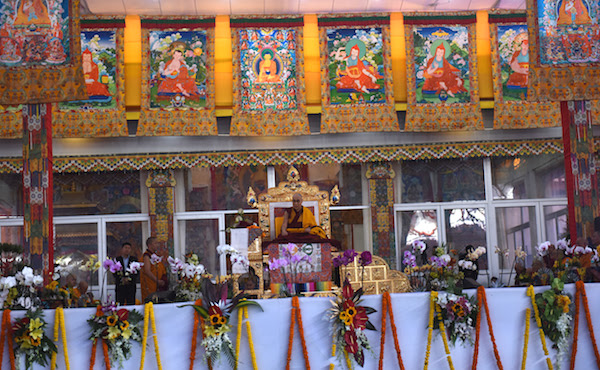 BODH GAYA:  The Mahabodhi Vihar (महाबोधि विहार) (Literally: “Great Awakening Temple”), a UNESCO World Heritage Site, is a Buddhist temple in Bodh Gaya, marking the location where the Buddha is said to have attained enlightenment.

The Dalai Lama began the first of the four days preliminary teachings on Shantideva’s A Guide to the Bodhisatva’s Way of Life (Tib: Chodjug) and Kamalashila’s The Middling Stages of Meditation (Tib: Gomrim Barpa) at Bodh Gaya ..

The preliminary teachings began with recitation of Heart Sutra in Pali, Sanskrit and Tibetan language, salutation from Abhisamayalankara and one verse of the mandala offering.

Before commencing the main teaching, His Holiness the Dalai Lama greeted the audience and met with members of sponsors and dignitaries.

His Holiness said that he had been keen on giving teachings to the devotees that would really benefit them in their daily lives. The chosen texts: Chodjug, Bodhisattva’s way of life consists of ten chapters dedicated to the development of Bodhicitta (the mind of enlightenment) through the practice of the six perfections; The Middling Stages of Meditation lays emphasis on the sequential understanding of the practice of teaching of Buddha.

His Holiness said he received the explanatory transmission of the Bodhisattva’s Way of Life from Khunnu Lama Rinpoche in Bodh Gaya and the transmission of The Middling Stages of Meditation from a Sakya abbot.

His Holiness explained that it is more important to put dharma to practice, rather than praying and performing rituals. “Whatever dharma discourse we do, its important to turn the dharma into practice. We are doing this dharma discourse in accordance to perfection of wisdom teaching, therefore we will have to do the practice of cultivating spirit of enlightenment in order to pray for all sentient beings.”

His Holiness, very passionately, spoke about the need for Tibetan Buddhists to bring primary focus on quality in their religious pursuits and focus on contributing to the world through their rich traditional knowledge. “The cultural tradition and knowledge of Tibet is a treasure for the world. Through the knowledge of our cultural heritage, we could make immense contribution to the world. Tibetan ancestors worked really hard to have the study of logic, science of mind and epistemology translated in Tibetan language. We should strive to benefit the world with these ancient knowledge.”

He emphasised that his main commitments, since he devolved the political authority in 2011, has been to work for promotion of human values; promotion of religious harmony; and the preservation of Tibet’s rich cultural heritage.

Speaking about universal responsibility and promotion of oneness of humanity, His Holiness the Dalai Lama said he considers himself as one among the seven billion human beings. “Although I am sitting on this throne to introduce the teaching of Buddha, we are all same human being. Irrespective of whether we are believers or non-believers, we all want happiness and do not want suffering. Moreover environmentally and economically, we are living as one human community. If something is going wrong in one community, it affects other communities as well. Living divided won’t fit in today’s reality.”

“Although we pray for all sentient beings, we cannot really do much for them. In the practical sense, what we can do is promote love and compassion through secular means and not through religious views,” His Holiness observed.

Contending that people of all faiths should respect and accept the common message, His Holiness said, “All religions and beliefs are beneficial for the followers and therefore it all must co-exist peacefully. But all traditions have same message and that is love, compassion, helping heart. The goal is to promote love and compassion. The philosophical differences are needed because of the difference in our mental dispositions.”

“As a Buddhist monk, even in dreams I always feel that I am a monk. From my own experience I know that the practice of teaching helps me and therefore I feel that people who follow their religion sincerely, could really benefit from their practice.”

His Holiness then started the formal teachings of the text of Shantideva’s A Guide to the Bodhisatva’s Way of Life (Tib: Chodjug).

His Holiness will resume the teachings tomorrow from 12:30 pm.