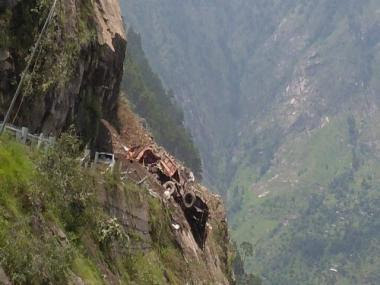 At least 10 persons were killed and about 30 others feared buried under debris after a major landslide trapped a bus and other vehicles in Himachal Pradesh’s Kinnaur district on Wednesday, officials said.

State Disaster Management director Sudesh Kumar Mokhta said at least 13 persons were pulled out of the rubble in an injured condition during the initial hours of the rescue operation and shifted to a nearby hospital.

One of the deceased has been identified as Rohit Kumar of Kayao village in Rampur area of Shimla district, Mokhta said.

He said Union Home Minister Amit Shah has talked to him and the topmost priority as of now is to rescue those trapped under the debris and provide them the best possible treatment.

The home minister also directed the Indo-Tibetan Border Police (ITBP) to provide all assistance to the Himachal Pradesh government in rescue and relief operations.

Thakur also told the Assembly that an army official called him and extended help.

A helicopter is also being arranged for the rescue operation, the chief minister said.

He said the landslide occurred when there was no rainfall in the area at that time.

Several people have been killed in landslides in the state this monsoon season.

Earlier on 25 July, nine people were killed and three others injured in multiple landslides near Batseri on Sangla-Chitkul road in Kinnaur district.

Similarly on 27 July, at least eight people died, two were injured and two went missing in flash floods triggered by a cloudburst over the Tozing Nullah in Udaipur of Lahaul-Spiti district.

Jal Shakti minister Mahender Singh Thakur had informed the state Assembly on 4 August that a total of 218 people have died and 12 were missing in Himachal Pradesh this monsoon season.

With inputs from PTI

Cloudbursts and flash floods in recent years have become a regular feature in the hill state of Himachal Pradesh. However, the loss of life caused by natural calamities can be mainly attributed to increasing human interference, particularly in eco-sensitive Himalayan zones, experts say.

Why is the state so prone to landslides? News18 explains:

Experts told IANS that since mountains in Himachal Pradesh are part of the Himalayan range that are young and fragile in nature, creating cracks and fractures in the rock could widen in future and create a rockfall or slope failure zone—a phenomenon in which a slope collapses abruptly under the influence of rainfall or an earthquake.

They say anthropological intervention along with climate change has worsened it further. Be it the development of hydropower projects or tunnels or roads.

Seven people died in the exceptionally high rainfall across the cold desert of Lahaul-Spiti district on July 27-28. Keylong and Udaipur subdivision of the district faced 12 incidents of flash flood after a cloudburst in which the Tozing Nallah impact was devastating, says a government report. Two days before this disaster, nine people were killed by a landslide in Kinnaur district as boulders fell and hit the vehicle they were travelling in.

Both Lahaul-Spiti and Kinnaur fall in the Himalayan ranges, known for geological and ecological vulnerability. This monsoon the heavy rains also caused major landslides in the state’s Kangra district, claiming 10 lives. Terrifying videos capturing massive landslides in the Sirmaur district are common these days.

Explaining why flooding and landslides are common in the hill states, Y.P. Sundriyal of the Department of Geology with Hemwati Nandan Bahuguna Garhwal University in Uttarakhand told IANS, “Higher Himalayas, both climatically and tectonically, are highly sensitive, so much so, that at the first stance the construction of mega hydro-projects should be avoided. Or else they should be of small capacity.”

On the subject of road construction, Sundriyal says, “Secondly, the construction of roads should be done with all scientific techniques. At present, we just see roads are being made or widened without taking proper measures such as no slope stability, lack of good quality retaining wall and rock bolting. All these measures can restrict the damage done by landslides up to some extent.”

Citing a huge gap between planning and implementation, Sundriyal said for instance rainfall patterns are changing, temperatures have been increasing along with extreme weather events.

Environmental activists claim the state’s policy of promoting mega hydropower projects is being implemented in a fragile and eco-sensitive zone, without an appreciation of the cumulative impact of the works.

They say more than 140 hydropower projects have been allocated in the Sutlej basin and disasters like the ones in Chamoli and Kedarnath are in the making.

They demand a moratorium on the construction of all new hydropower projects located in the Sutlej and Chenab river basins until a study on the cumulative impact of the projects on the fragile ecology and livelihoods is done.

Saying urbanisation has led to a decrease in soil infiltration capacity, resulting in floods, Central Water Commission Director (Flood Forecasting and Monitoring) Sharath Chandra told IANS, “Himalayan systems are very young and fragile, making them unstable. The rain which was earlier recorded during the span of days now outpours within a handful of days only. This has led to an increase in the incidence of flash flooding and landslides, making the region very vulnerable to natural disasters. If the landslide comes down to the river stream, it increases the chances of floods.”

Experts say the higher Himalayas were once home to a lot of glaciers, which have now retreated owing to global warming and climate change. Glacier is a moving mass of ice, soil and rocks and thus, it consists of lots of loose sediments. According to geologists, the retreating glaciers have left behind unlimited sediments that consist of an unstable mix of earth and rocks in the higher reaches of the Himalayas.

In such cases, even less rainfall is good enough to move the boulders and debris downstream. Hence, the higher Himalayan region is very unsuitable for dams and tunnels due to the higher concentration of sediments. A recent path-breaking report by the Intergovernmental Panel on Climate Change (IPCC) on the effects of climate change has also flagged glacial retreat in the Hindu Kush Himalayas as a problem.

“Over high mountains in Asia which include the Himalayas, snow cover has reduced since the early 21st century, and glaciers have thinned, retreated, and lost mass since the 1970s,” the IPCC said.

The IPCC warned that snow-covered areas and snow volumes will continue to decrease during the 21st century, snowline elevations will rise and glacier mass is likely to decline further as emissions rise. “Rising global temperature and rain can increase the occurrence of glacial lake outburst floods (GLOFs) and landslides over moraine-dammed lakes,” it said.

Manshi Asher of environment research and action collective group Himdhara Collective told IANS that the local people have been speaking up against hydropower development for more than a decade now. And now the youth are also actively demanding a halt on these projects. “It is high time the government listens to people’s voices because the constitution grants tribals (of Lahaul-Spiti and Kinnaur) the right to say ‘no’ to any development that threatens their existence and survival,” she said.

Prakash Bhandari of her group added, “Apart from being a geological and ecologically fragile region, Kinnaur is a strategically sensitive area. And most importantly this is a scheduled V area with a majority tribal population. It has a thriving apple economy which should be protected.”

With inputs from IANS