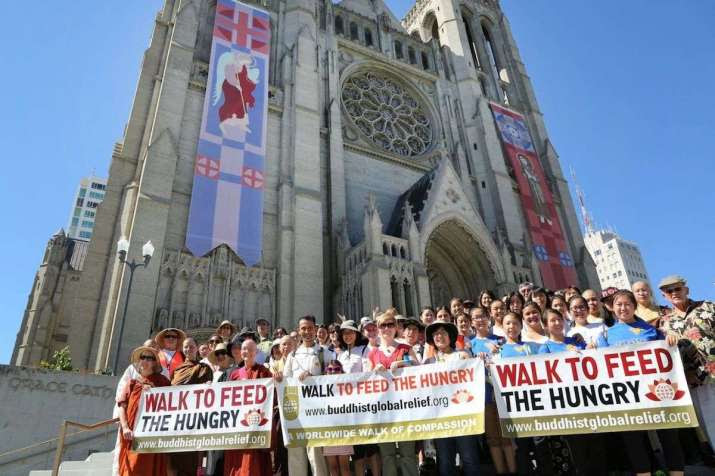 Buddhist Global Relief is an organization of socially engaged Buddhists with a mission to “combat chronic hunger and malnutrition founded by Bhikkhu Bodhi.

Buddhist Global Relief (BGR), the socially engaged Buddhist organization founded by Venerable Bhikkhu Bodhi, cancelled their 27 October Walk to Feed the Hungry in New York City due to a Nor’easter (a form of cold-air cyclone particular to this region), which brought gusts of wind of up to 80 kilometers per hour to the area. The walk was part of an international series of fundraising events. Despite the cancelation, fundraising for the walk continues with the goal of addressing issues of hunger worldwide.

Ven. Bhikkhu Bodhi, an American monk, scholar, and a prolific translator who ordained in the Theravada tradition in Sri Lanka, wrote on the event fundraising page:

The New York Walk to Feed the Hungry is the biggest and most crucial of BGR’s walks. Our ability to sponsor our projects through the coming year, and to add more projects, depends on the success of this walk. Please help to support this walk by donating to my fundraising page. This will be a great source of merit for yourself, and a great source of blessings for others–for poor children around the world who need not only food but an education to enhance their chances in life. (Firstgiving)

The Walks to Feed the Hungry are one of Buddhist Global Relief’s most popular events, with walks in small US cities such as Milford, Michigan (population 16,672), and major metropolitan areas such as New York City and Los Angeles. Past walks, such as the 2015 walk in San Francisco, served to bring together Buddhists from multiple communities to participate in the good cause:

Buddhism has enjoyed a long history in San Francisco, thanks to its large communities of Asian immigrants, who each brought their version of the religion and helped spread it across the US. The 3.3 mile walk echoes this history, with a route that winds through the city’s Asian neighborhoods and serves as a walking timeline of Buddhism’s spread throughout Asia.

“[Buddhism] came to America last, so we go to the Mindfulness Center last,” said Aggarwal [the organizer of the walk]. “We start in Chinatown, Japantown, the Vietnamese temple, in a similar fashion to how Buddhism spread in Asia. We are following the same pattern.” (KQED)

Still scheduled are walks on 3 November in Montclair, New Jersey, and 10 November in Houston, Texas. Those interested can volunteer or donate through the Buddhist Global Relief webpage, or register to walk in the event.

BGR’s mission is “to combat chronic hunger and malnutrition.” Bearing in mind the Buddha’s statements that “hunger is the worst kind of illness” and “the gift of food is the gift of life,” by sponsoring “projects that promote hunger relief for poor communities around the world” including “direct food aid to people afflicted by hunger and malnutrition, helping develop better long-term methods of sustainable food production and management appropriate to the cultures and traditions of the beneficiaries, promoting the education of girls and women, so essential in the struggle against poverty and malnutrition, [and] giving women an opportunity to start right livelihood projects to support their families.” (Buddhist Global Relief)