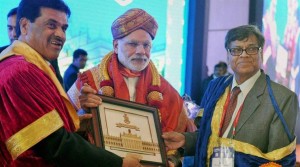 The  103rd edition of the Indian Science Congress got underway in Mysuru on Sunday with Prime Minister Narendra Modi calling on Indian scientists to keep the economy, environment, energy, empathy and equity at the heart of their endeavors in the interest of impactful science.

“The impact of science will be the most when scientists and technologists keep the principles of what I call Five Es at the centre of their enquiry and engineering,’’ the PM told the delegates drawn from universities spread across the country apart from a handful of eminent world scientists at the Mysore University.

Scientists need to find cost effective and efficient solutions, “ensure our carbon footprint is the lightest”, focus on energy since prosperity depends on green energy, display empathy by ensuring “efforts are in tune with our culture, circumstances and social challenges” and create equity where “science advances inclusive development and improves the welfare of the weakest”, the Prime Minister said.

Keeping away from the controversies generated at the 102nd Science Congress due to references to purported ancient Indian scientific knowledge, he dwelled extensively on the use of science for mitigating climate change issue as well as the global understanding for co-operation on climate change arrived at Paris.

He, however, emphasised that the traditional should not be shunned in the pursuit of new knowledge. “If we wish to restore the harmony between human and nature we must also harness the full potential of traditional knowledge. Societies across the world have developed this enormous wealth through wisdom gathered over the ages. They hold the secrets to economic, efficient, and, environment friendly solutions to many of our problems. But today they are at risk of extinction in our globalised world,” the Prime Minister said.

“In the area of health, modern medicines have transformed healthcare. But we must also use scientific techniques and methods to delve deeper into traditional medicines and practices like yoga for more holistic lifestyle and change our paradigm from treatment to wellness,” he stressed.

He alluded to the completion of 100 years since Albert Einstein propounded the general theory of relativity and quoted Einstein’s call for humanism to be the heart of science. “This year we mark a hundred years of a significant moment in the history of science, when Albert Einstein published in 1916 ‘The Foundation of the General Theory of Relativity’. Today, we must recall the humanism that defined his thought: Concern for man himself and his fate must always form the chief interest of all technical endeavours,” he said.

“For me, good governance is not just about policy and decision making, transparency and accountability. It is also about integrating science and technology into the choices we make and the strategies we pursue. We will try to increase the level of resources for science, and deploy them in accordance with our strategic priorities. We will make it easier to do science and research in India, improve science administration, and expand the supply and improve the quality of science education and research in India,” he said.

The PM outlined rapid urbanization as one of the key challenges alongside climate change.

Union Minister for Science and Technology Harsh Vardhan in his speech said he would desist from talking about the past glories of Indian science like he did at the 2015 conference since his statements on the antiquity of the Pythagoras theorem last year drew more attention than the conference.

Second Day of His Holiness the Dalai Lama’s Dialogue with USIP...