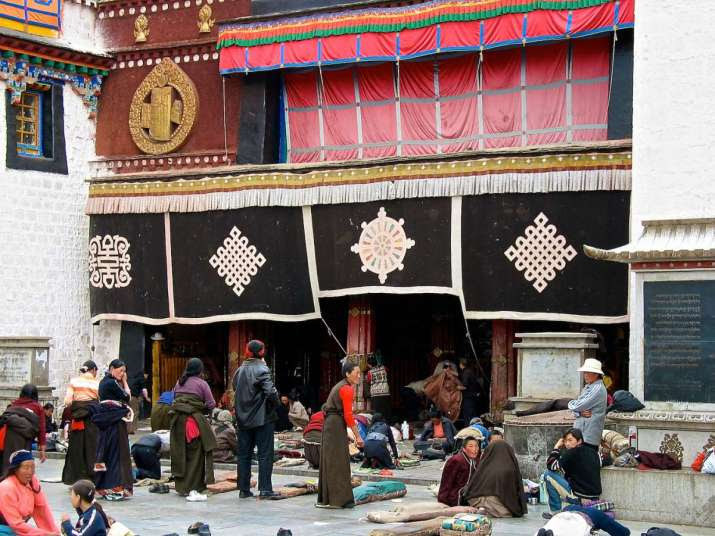 By  Shyamal Sinha
The Jokhang is the most celebrated temple in Tibet. Because the temple is not controlled by a particular sect of Tibetan Buddhism it attracts adherents of all the sects as well as followers of Bon-Po, Tibet’s indigenous religion. Three pilgrimage circuits exist in Lhasa, each directing pilgrims to the Jowo Sakyamuni statue: the Lingkhor, which encircles the city’s sacred district; the Barkhor, which encloses the Jokhang temple; and the Nangkhor, a ritual corridor inside the Jokhang.
A large fire broke out on saturday  evening in the compound of one of Tibetan Buddhism’s most sacred temples, the Jokhang in Lhasa. Footage posted to social media showed a blaze engulfing a building within the temple compound, a UNESCO World Heritage Site, at around 6:30pm local time. Although the area is typically crowded with pilgrims, especially during the Losar celebration of the traditional Lunar New Year, which began on Friday, no casualties have been reported.

A report on the website Phayul.com, citing unnamed Tibetan sources in Lhasa, said that a shrine within the larger compound had been destroyed in the fire, while the main building of the 7th century Jokhang and its contents remain undamaged.

The Jokhang stands in Barkhor Square in the middle of the ancient Tibetan capital, and at the centre of a network of temples and monasteries. Tibetan Buddhists generally view the Jokhang as the most sacred temple in Tibet. It houses countless irreplaceable cultural treasures, including the famous Jhowo statue of Shakyamuni Buddha, brought to Tibet in the 7th century by the Chinese consort of the Tibetan emperor Songtsen Gampo. The Jokhang also houses more than 3,000 images of Buddhas, Buddhist deities, and historical figures, as well as treasures, manuscripts, and other artifacts, according to UNESCO.

Several hours after the first images of the fire were circulated online, state media in China reported that the flames were quickly extinguished, although the cause of the fire was unclear. The streets around the temple were reportedly reopened to pilgrims on Sundaymorning. The Xinhua news agency reported that the Jokhang had reopened following the fire, but would be closed from 19–22 February, as scheduled, while monks there mark the New Year.

The actual extent of the fire damage to the expansive compound remains uncertain, while images and videos posted to social media make it difficult to determine exactly which buildings were affected. Chinese state media have said there was no damage to cultural relics.

London-based scholar and expert on contemporary Tibet Robert Barnett noted that the slow response of state media to report on the fire and official attempts to remove social media content had increased speculation among the public. “This has increased the fear of people that something really serious has happened,” said Barnett. “People are hugely concerned, rightly or wrongly, that the damage might be much more severe than the media is letting on.” (The Guardian)

“It’s devastating for people seeing this . . . [At first] it looked like it was impossible anything would survive . . . Now there is this uncertainty,” Barnett observed. “Nobody knows quite what to believe . . . It could be less dramatic than people feared, but there is a big information vacuum about what has happened.” (The Guardian)

The Jokhang was founded during the reign of Songtsen Gampo (r. c. 629–c. 649), the 33rd Tibetan king, who founded the Tibetan Empire (618–842) and is traditionally credited introducing Buddhism to the Tibetan people. The oldest section of the Jokhang was constructed in 652, although the temple was expanded and renovated several times over the subsequent 900 years—the most recent major work was ordered by the 5th Dalai Lama (1617–1682). 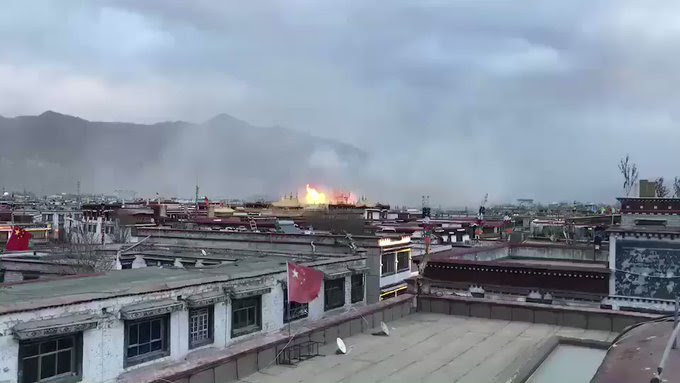 Noted Tibetan writer Tsering Woeser also expressed concern over the situation. “Tibetans consider Lhasa to be a sacred place, but Jokhang is a sacred place within that sacred place—the most sacred in all of Tibet. Some people say it’s only because of Jokhang that the holy city of Lhasa exists at all,” she explained. “No matter where they are in the world, Tibetans all wish to come to Lhasa to pray at Jokhang; it’s the wish of a lifetime. Many who make pilgrimage to Lhasa prostrating do so just to visit the temple.” (BBC)

Many murals and other items were damaged during the Cultural Revolution,  Woeser added, but much of the Jokhang’s wooden architecture has remained intact for many centuries, despite numerous renovations.